by Frank Macaluso 8 months ago in Script
Report Story

A one-act play what I wrote in high school. It ain't so good. 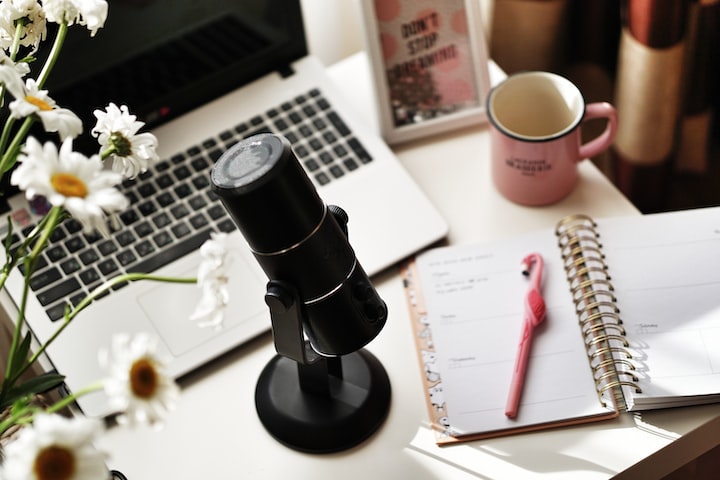 Photo by Vika Strawberrika on Unsplash

This is a one-act play I wrote in high school. It's not very good and I will never ever use it. I strongly recommend that no one else ever perform it or use it in any other way. Instead, read it and feel better about your own writing ability. Odds are good that you, whoever you are, are a much better writer now than I was at 17.

Like, seriously, what the fuck was I thinking here?

Anyway, enjoy my past failure!

SETTING: GREG’s bedroom, untouched from the last time he slept in it. It is dark. The door is closed.

AT RISE: The door opens. CAT and EDWIN enter cautiously, looking around. CAT turns on the light.

(CAROL enters solemnly. She is carrying an envelope.)

CAROL : Thank you so much for coming to the wake. I really appreciate you being here.

EDWIN : Thank you for having us, Mrs. Thorpe. We’re so sorry for your loss.

CAROL : Thank you. (hands EDWIN the envelope) Here. Greg wanted you to have this before he died. I haven’t listened to it, so I’m not sure what it is.

CAT : What do you think it is?

(EDWIN opens the envelope and pulls out a CD. He shows it to CAT.)

CAT : Well, you never know! And there’s only one way to find out. Where’s his CD player?

(EDWIN and CAT look around for a bit, then find and walk over to the CD player. EDWIN puts the CD in and hits play.)

EDWIN : Hey...December. That was a couple of months ago. I guess he wanted to share his final thoughts with us.

CAT : Maybe he stumbled on some deep psychological truths he wanted us to know and spread to the masses.

GREG : I don’t know what to say here. I’ve never had a diary before. Normally I wouldn’t, but my mom thinks it will help me...Well, I bought some new headphones. They’re pretty nice. They add some cool reverb to the music.

GREG : December 5th: Well, I’ve come to the conclusion that lizards are the most enlightened creatures on Earth. I forget how I came to this conclusion. It was during lunch. I assure you I was sober. Anyway, for the next year or so, I will be making strives to become a lizard.

(CAT and EDWIN look at each other, confused.)

GREG: Humans are stupid. I look forward to the day when the lizards and I take back the Earth.

EDWIN : What the hell are we listening to?

GREG : December 14th: I finally achieved my goal of surviving a whole week on nothing but air. I am one step closer to reaching full lizardness and enlightenment. Now on to the next step: listening to nothing but Otis Redding for the next year. I’ll start midnight on New Year’s.

CAT : I don’t get it. Who’s Otis Redding? What does he have to do with lizards?

GREG : December 15th: There’s this girl named Marla whose locker is right next to mine. I never noticed before, but she’s pretty cute. We started talking today. It was nice. Turns out we’ve got a lot in common. We both like Etta James and Dee Dee Warwick. I’m surprised she knew who Dee Dee Warwick was! She does a good impression of her, too. We talked until the first bell. It was pretty cool. I almost can’t wait till tomorrow so I can talk to her again. I think we could be great friends.

CAT : Marla Soto. She’s in choir with us.

(EDWIN stares at her blankly.)

EDWIN : I’m sorry. I still have no idea who that is.

GREG : December 16th: Marla hugged me today. She smelled nice. It was a nice hug, too. So warm and tight and sincere. Some people just can’t be sincere when they hug. They lie with every embrace. They don’t really care enough to be worthy of a hug, and you can feel it in the hug. Not with Marla. Marla is very...genuine, and I love that about her.

CAT : Do you think he ever told her?

EDWIN : No way, man. Greg would never do that. He was too shy for all that bold, gushy rom-com stuff. Remember when he had that crush on Jenny Holzman all through freshman year? Whenever she walked up to him, he’d suddenly have to go to the bathroom.

GREG : December 17th: I wonder if Marla knows how much she completes me, how much I look forward to seeing her red velvet hair and hearing her sweet, lyrical voice every day. I’ve decided: sometime before the school year ends, I’m kissing her. I don’t care if it’s on the lips or on the cheek or on the hand or on the nose or on the top of her head. She’s just too awesome for me to go through this school year without making my feelings known. I wonder how it will feel. Will I be as sincere as she is when she hugs me? Will she like it? Will she like me?

EDWIN : I can feel my teeth rotting as we speak.

CAT : Hey, at least he’s not talking about lizards again.

GREG : December 19th: Maybe this whole lizard thing isn’t all it’s cracked up to be.

CAT : Calm down! I think this is the last one about the lizard thing.

GREG : I mean, Marla would never date a lizard.

GREG : Oh, God...this sounds so stupid. I’m giving up enlightenment and perfection for some girl. A perfect girl. At least, I think she’s perfect. As close as any human could possibly get to perfect, anyway. But still, perfect. I think I’d be much happier with her than amongst a bunch of lizards, anyhow. They could never hug me they way she can, bring me pure, unadulterated joy the way she can. They’re all cold-blooded. And their arms are too small, anyway.

EDWIN : I hope we’re finally done with all the lizard stuff now.

CAT : He just said we were. Listen!

GREG: (sarcastically) December 25th: It’s Christmas. Wee. My Great-Aunt Dillie Mae is coming over to visit. She’s a complete and total bore. All she does is go on about her roommates’ grandchildren and how cute they are and how I need to lose a few pounds. (sincerely) I miss Marla. I can’t stop thinking about her. It’s just...I feel really strongly that...oh, I don’t know. I think I love her, but how do I tell her? Do I tell her at all? It’s...confusing.

EDWIN: Okay. That...that was weird. Why would Greg give this to us?

CAT : Maybe he wanted us to tell Marla how he felt about her.

EDWIN: (grinning) That is the cheesiest thing I've heard! (beat) Greg was prone to do cheesy things sometimes.

CAT : Yeah, and don't forget about that whole thing with Jenny Holzman. And then when he had that crush on Crystal Martorano. And then Yolanda Watkins. Then Viola Simmons. Then Casey Weir. Then Thalia Rodriguez. Then—

CAT : Exactly what Greg wanted us to do: we give this CD to Marla and tell her Greg liked her.

EDWIN : Hmmm...I don't know, Cat. It seems...wrong and illogical, somehow. I mean, Greg just died. And what if Marla liked him back?

EDWIN : Okay, so maybe it’s not incredibly likely, but it’s still possible. And if she did like him back, imagine what that might do to her, to know the guy she liked liked her back but now it’s too late to do anything about because he’s dead! I don’t think we should do it, Cat.

CAT : Just trust me, Ed. I know this kind of stuff more than you do. It’ll be fine, trust me.

EDWIN : You’re gonna do it whether or not I say yes, aren’t you?

EDWIN : Fine. Do you know where Marla lives?

CAT : No, but I can find out. (pulls her cell phone out from her bra, dials, and makes a call) Hey, Miranda! Listen, do you know where Marla Soto lives? (pause) Marla Soto. She’s an alto, about five-foot-five, bright maroon hair, super cute.

SETTING: A beige couch rests downstage center, with a coffee table in front of it. There is a reclining chair to the right of the coffee table. The room is nothing too fancy. The door is stage left.

AT RISE: MARLA and LETICIA enter. LETICIA is in a rush, carrying a small bag of groceries. MARLA is carrying her backpack. She takes it off and sits on the couch.

LETICIA : I’m gonna get dinner started now. Your father should be here with Sammy and Jose in about twenty minutes. You answer the door when they get here, okay?

MARLA : Okay, Mom. You know, you don’t have to impress them or anything. They’re still family.

LETICIA : I know, but it’s rare when we’re all together. I want this to go as smoothly as possible.

(LETICIA exits to the kitchen. MARLA puts in her earbuds and starts listening to some music. She takes a textbook, a notebook, and a pen out of her backpack and starts doing homework. The doorbell rings. She pulls the earbuds out, gets up and walks to the door.)

MARLA : Please don’t be Mrs. Hightower coming to borrow more sugar. What does she need all that sugar for, anyway? (she opens it; CAT and EDWIN stand there; CAT is holding the manila envelope) Hey. Do I know you?

CAT : Cat Ramos. I sing soprano in choir with you.

MARLA : Are you that crazy chick who’s always running and hopping around before the bell rings?

MARLA : And one time you brought a jump rope to class and started playing double-dutch with Shirley McKinnon and Citlalli Ortiz during your solo?

EDWIN : Why are you proud of that exactly?

CAT : (ignoring EDWIN) Don’t mind him. That’s just Edwin. Say, listen. We’ve got something we think is for you. You remember Greg Thorpe.

MARLA : I think I know who you’re talking about.

CAT : Cool! (hands the envelope to MARLA) Anyway, he died and we think he wanted this to go to you.

LETICIA : (offstage) Is that them, Marla?

MARLA : No, Mom. It’s some friends of mine from school.

LETICIA : Are they going to be staying long? ‘Cause I’m not cooking for more than five people. I planned this night too well to change it.

MARLA : (looks at envelope, then back at CAT) Oh. Oh, yeah! That reminds me. I got something in the mail that I think that belongs to you.

(MARLA exits briefly. She returns with a CD player. She presses play.)

GREG : Hey, guys. If you’re listening to this CD, it means I’m dead, which I...really wasn’t expecting. I mean, I thought I’d pull through. People on TV do it all the time, especially when they catch it at an early stage. Anyway, I just wanted to let you know that I’ve really appreciated the seven or so years we’ve known each other. You’ve been the best friends a guy like me could ask for. I just wish it could’ve lasted a little longer. But it didn’t, so I just figured I’d give you one last message before I die. So, guys, I love you, keep being awesome, and don’t forget to wash behind your ears. Bye.

GREG : P. S. I made a mixtape and I hid it under my bed in a hidden compartment and I made it just for you. Enjoy!

(CAT runs right out. MARLA looks on in confusion.)

EDWIN : She does that a lot.

A comedian. I may have made a huge mistake.

More stories from Frank Macaluso and writers in Fiction and other communities.