Turning Bloodlust to a Green Thumb 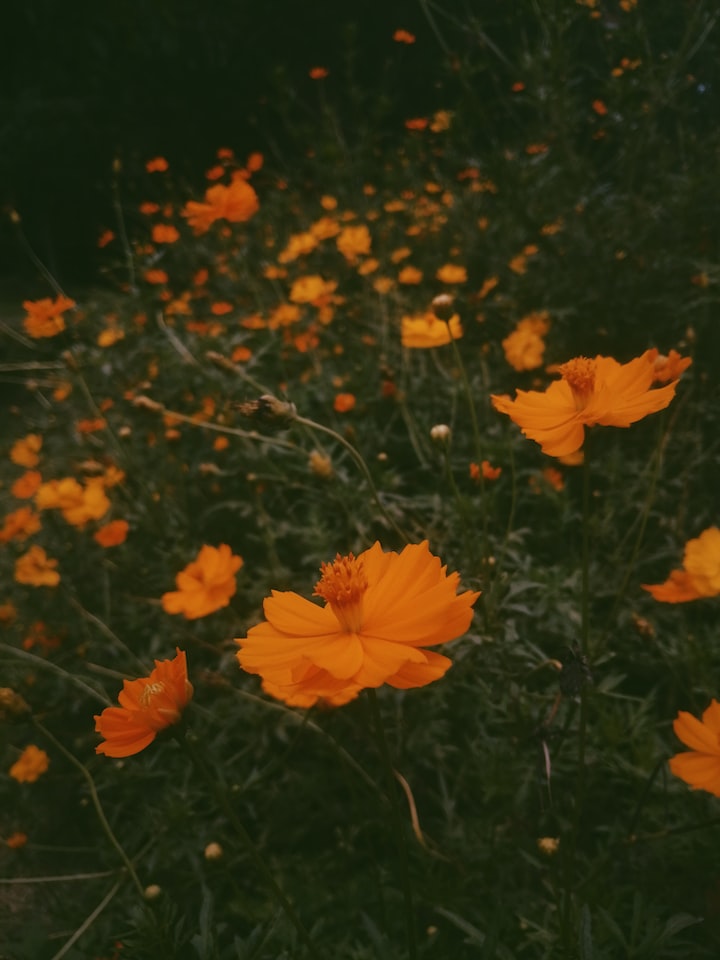 Photo by Priyanka Mondal on Unsplash

The garden in front of her cabin was where Anne found peace. Tending to her marigolds and the mature pear tree gave a calm sense of purpose, as they bathed in the sun. Anne was once a force to be reckoned with, but now that she’s retired, she merely keeps to herself, hoping no one elicits her instincts. To put it plainly, Anne was once at the top of the food chain. She was the one who hunted because she knew there was never an opportunity to let her guard down.

The intelligence agency recruited Anne for her athleticism and effortless ability to camouflage in her surroundings. As an only child, Anne grew up studying all the characters around her. When she was alone, she’d embody a character, hoping to live life the way they did. What was originally a coping mechanism for loneliness, allowed her to navigate a multitude of social situations and further test the limits of her own character.

Having roleplayed so often, she built the range of her voice, taking on any role if that was how she spoke all her life. When she was first recruited at 24 years old, her dynamic switches even surprised the best of her vocal coaches. Her favourite act was initiating a conversation with the honeyed voice of a child and immediately responding with the guttural and raspy voice of her father who was a life-long smoker. She was involved in gymnastics, soccer, and archery, all of which honed her physical abilities and focus. Her hawk-eye vision allowed her to pick up numerous details about her surroundings at an incomprehensible speed, and her athleticism always made her elusive to track.

Getting close to targets without being discovered as an asset made her excel in reconnaissance. The agency depended on her for catching large targets that seemed to have no break in their security detail. Her unassuming character was perceived as no threat and often broke the strict timelines these people of importance adhered to without compromise. She could easily lay waste to guard teams or eliminated targets without ever being considered a suspect. Her favourite assignment by far had to be her first kill. It awakened her bloodlust and made her a ruthless agent that was only focused on her assignments.

Her intended target had been held captive in their hotel room by another agent. The agency they belonged to was unknown, but Anne had to act quickly before they could extract the target. After being given the green light to complete the mission by any means necessary, Anne picked the lock to the supply room, put on a receptionist’s uniform and approached the door. Although not belonging to the uniform, the necklace she wore provided audio and visuals to those observing the case back at the agency. Her earpiece gave her a direct line to her handler, but they rarely spoke, trusting Anne’s decisions. She had her firearm equipped with a silencer and felt confident using it. Years of archery and extensive training at the agency made her an excellent shot, but she never had the need to use it in the field, until that day.

“Mr. Rayleigh, I have the documents you requested from the manager. I’ll just need your signature before I can be on my way.” Anne hoped this was enough to get the agent to come to the door or at least Mr. Rayleigh himself so she could capture him somehow.

“My assistant can sign for it, he’ll come to the door.” Now, Anne knew that there was no way this would be okay normally. Highly sensitive information needed to be handed directly to the intended recipient or at least have them acknowledge they received it.

“I’m sorry sir, but I need your signature. I can give it to your assistant at the door and can wait for the form.” Anne could hear murmuring behind the door. The agent must have been directing commands at Mr. Rayleigh, but it didn’t matter because Anne was prepared for whoever opened the door.

“Alright. They’ll be with you shortly.”

Footsteps could be heard approaching the door. With a document in hand concealing her firearm, Anne just needed visual confirmation before she could fire. The door handle turned, but hadn’t opened. There was a momentary pause.

“Hello there,” said the agent, as they opened the door.

“Take them out,” was immediately delivered through Anne’s earpiece and without hesitation she neutralized the target. After kicking the firearm they had in their hand, Anne approached Mr. Rayleigh who was ecstatic about being freed. Unfortunately for him, this wasn’t a rescue mission.

She had since carried out numerous assignments, some deemed impossible, which only excited her. Prior to her first elimination, Anne exhibited some apprehension. She wasn’t scared to complete a kill, instead she was scared that she’d enjoy it too much and it was the adrenaline rush she’d been seeking. She felt invincible when she was on the hunt. Her bloodlust permeated the air, making her prey uneasy but never enough to change their routine. Anne was rarely noticed, but if someone ever raised any suspicions, she was still the predator even when she was the one being hunted.

After four decades of service, her cabin is what allowed her to appreciate life and reflect on her accolades. She could take in the light, the sounds around her and look for wildlife and not have register and remember every sensory input, searching for abnormalities. Initially, being woken up by the whispers of the night or the crashing of the day amused Anne. She was always on alert, never entering sleep so deep that she was unaware of her surroundings. Dreams didn’t entice her either as she was living her best life and didn’t want to spend anytime not enjoying it. Everyday was a challenge and brought with it new thrills. Taking care of her flowers had been the most difficult task she’s ever had to do. Despite only knowing red, Anne wasn’t about to give up nurturing her green thumb to grow yellow marigolds.