by Gel 5 months ago in Short Story
Report Story 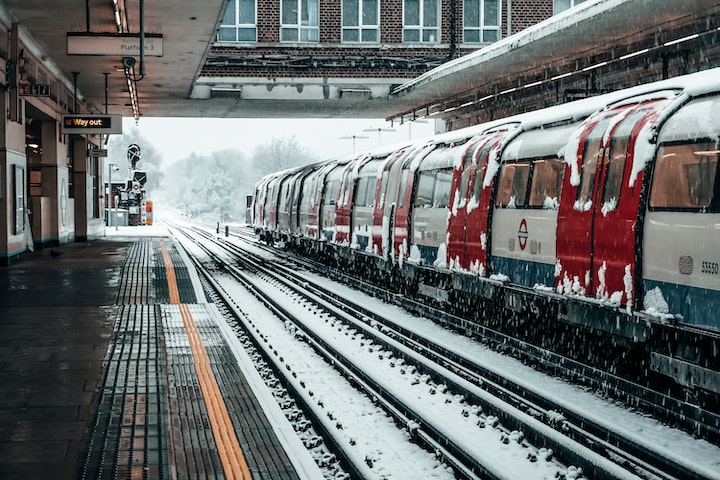 Photo by Will Kennard on Unsplash

The cool black steel peaked through the bright white snow.

With a sigh, he shut his eyes in indignation as a small cloud that left his lips. The warmth that came from inside him could dissipate so quickly, so easily, without making a big deal about it.

When the man opened his eyes again, he inhaled, letting in the cold air. It was the kind of cold that bit at you and made you feel hollow. His ears felt so numb that he imagined stabbing a needle through them and not being able to feel anything. His body felt as stiff as the icicles formed on the canopy he waited under. The longer he stared at them, the more they began to look like teeth. He let out a quiet shiver.

His train of thought was interrupted by the wave of a hand, wrapped in a red mitten.

Removing one of his earplugs, his eyes followed the arm connected to the mitten and found himself looking at a stranger.

“Which one are you trying to catch?”

“The 655. Last departure of the night. Where does that one go, again?”

The man looked around, searching for an answer. The station was empty. “I don’t know. I’m not the best with directions.”

The stranger looked south, then back at the man. “Right... You should probably keep your earplugs out, at least. It’s not really smart if you think about it, just in case there are any important announcements or people trying to get your attention—”

“I’ll know to go when I see it.” The man’s words sounded like a snap. He felt guilty almost immediately afterwards. “I’m sorry.”

“For the holidays? Yeah, that makes sense.”

“Yeah.” The man was silent for a moment, looking as if he wanted to say more, then ultimately remained in his silence. But, the undiscouraged stranger had a strong will for breaking it.

“Well… hopefully you get to come home to them safely.”

Water droplets began to drip from the icicles above. One of them fell on the man’s face and streamed slowly down his cheek.

“What do I mean?” The man stares blankly at the black steel. “I mean it’s a time to celebrate and be happy. Everyone’s appreciating what they’re thankful for and coming together. It’s a nice thing to do, I guess.”

“No, I’m… My birthday’s on Christmas too, so… I’ve never known what it’s like to have a day to celebrate myself. By the end of the night, it’s always about everyone else.”

“I think the right people will make it about you, if they know it’s important to you.”

“Happy birthday, by the way.”

The man’s lips formed a flat line. “Thanks.”

The snow started melting on the tracks. Now the man started to grow curious.

“Where are you heading to, exactly?”

The stranger looked around jokingly, as if the man could be talking to anyone else. “Who, me?”

For the first time, the stranger saw the man almost crack a grin. “Wherever the winds want me.”

The man was now fully unamused. “What are you waiting for?”

“Same thing as you.”

The man studies the stranger. “Not to be rude, but you seem kind of off. I’m getting the feeling you might be a weirdo or something.”

The stranger raises their brows, looking strangely excited. “I— I’m the weirdo?” The stranger began to cackle uncontrollably, causing the man to feel unsettled. He took a step away from the stranger and gripped his fists. The stranger noticed this and took offense to the man’s actions, frowning obviously at him. “That was rude.”

The man and the stranger now stood several feet from one another. The distance between them felt bitter. But the stranger could never stay sour.

“The 655 was canceled. There was an accident earlier— er, an incident, ‘couple of stops from here. All trips south of there got canceled for the rest of the night. They announced it earlier through the speakers.”

“I know.” The stranger looked at the man with concern-flooded eyes. “It’s okay. You know now.”

“Yeah. Thank you… Wait, then why are you here?”

“I don’t know. I just thought you looked like you needed someone to talk to.” The man narrowed his eyes on the stranger in response. “I don’t come across a lot of people who wait for a train that’s never gonna come.”

The man looked at the stranger, suddenly feeling something caught in his throat. It was no longer icicle droplets staining his cheeks. He could only manage to get out a single word. “Yeah.”

The stranger extended a hand to rest on the man’s back. The small gesture was enough for the man to encourage the man to bury his face in the stranger’s neck. In the long embrace, the red mittens held on tightly as the warmth of the stranger shared itself with the body of the terribly cold man.