by Kelly Deary 10 months ago in family
Report Story 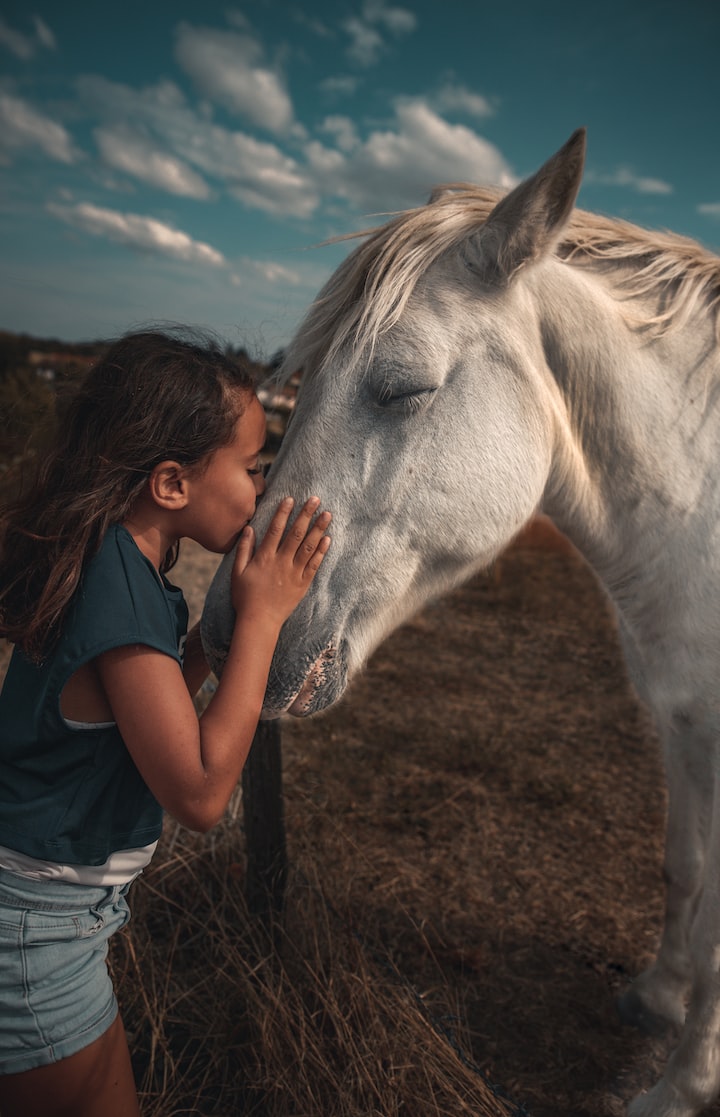 Photo by Jusdevoyage on Unsplash

Michelle leaned against the fence and watched as Hannah carefully maneuvered her wheelchair through the gate and into the pasture. She tried twice before but lost her nerve. Third times a charm. She closed the gate behind her and made her way to her favorite spot under the pear tree.

Under the pear tree was the best spot on the property. It had been winter when Michelle had first looked at the place. It had snowed the night before leaving the pear tree covered in a thick layer of light snow. The pond next to it was frozen solid, she imagined children skating on it. She could also imagine her horses grazing there in summer, nibbling the pears and splashing in the pond on hot days.

Today the pond was thawed and the pear tree was full and heavy with fruit. The tree provided ample shade making it the perfect spot to relax.

That's where Hannah had been sitting the day they met. She had an argument with her mother, Michelle had heard it from the barn. Hannah had come out to the tree to escape. Judging by the trail her wheelchair left Hannah needed to escape often.

Linda, Hannah's mother had become ove protective since Hannah's accident. She put extreme limitations on what the child could do. As far as Michelle had seen so far Hannah's life consisted of her house and the pear tree with the occasional trip to town with her father. That usually lead to an argument with his wife when they returned.

When she first laid eyes on the girl Michelle remembered thinking that she was the saddest looking sixteen year old she had ever saw.

The day she met Linda Michelle received a polite hello and a warning to keep her horses away from her daughter. That day Hannah was banned from coming into the pasture to sit under the tree. She couldn't even sit under it on her own side of the fence, which Michelle thought was ridiculous. Without a place to escape Hannah and her mother argued more. Michelle's heart would break for the child every time she saw her crying on the front porch.

A few weeks after moving in and Hannah's banishment Michelle began to notice Hannah sitting at the fence under her side of the pear tree but only when her mother was at work. She would lean forward in her chair rest her arms on the fence and talk to the horses as they grazed.

Now Michelle wasn't one to go against what a mother wanted for her child, even if she didn't agree with it But Michelle desperately wanted to see the girl smile. So she filled an old coffee can with horse treats and placed it among the marigolds that grew around the tree. She added a note that read “Hand flat. Keep your fingers out of the way.”

The next morning while Michelle did chores she began to hear giggling. She stepped outside the barn and saw Hannah at the fence, the treat bucket in her lap as she fed Magic, Michelle's old draft gelding a treat. The feel of his lips on her palm as he took the treat made Hannah laugh.

The door to the house opened and a blond woman stepped onto the porch. Michelle prepared for an argument. It didn't come. The woman, whom Michelle hadn't seen before joined Hannah at the fence. Michelle could hear them talking and laughing as she finished her chores.

Before going back to her house that evening Michelle went down to the pear tree to refill the treat bucket. The blond woman came outside “Hello” she called and once again Michelle prepared to defend herself. “I just wanted to thank you for the treats.” she nodded at the coffee can Michelle held

“Very much” the woman joined her by the tree. She extended her hand “I'm Emma, Lindas younger sister. I'm here to help Hannah while my sister is at work”

Michelle glanced at the house. “She seems to do okay.”

“Oh she does but Linda doesn't like her to be on her own.” Her face became a little more serious “Don't think badly of my sister. She wasn't always like this… We almost lost Hannah when that car hit her. It devastated Linda, she lost herself and let the fear of losing her only child rule her life since that day.

That day was the start of a journey Michelle never expected to take. It started with feeding treats at the fence and lead to this moment when Hannah decided to try going into the pasture on her own.

Michelle moved closer once Magic had noticed his new treat dispenser had moved into his space. She stood close enough to allow her to step in should Hannah need help but far enough away to allow Hannah some independence.

Magic approached, cautiously stretching his head out to smell Hannah. Satisfied she was who he thought Magic stepped closer and smelled the chair... he stepped back and smelled Hannah again. Then he stared at her for a minute.

“What's he doing?” Hannahs father Ben asked from behind her on his side of the fence.

“Remembering… Maybe” Michelle answered “He is a retired therapy horse. He used to work with people who had physical and mental disabilities.”

“They do that kind of thing for girls like Hannah?” Ben asked

Michelle was a bit surprised by their lack of knowledge. Some of this information would have been given to them by her doctors, the internet held the rest ... “There are actually a lot of different programs available for girls like Hannah. Have you not researched?”

Michelle looked at Hannah “How lonely and bored she must be. No wonder she looks so unhappy.”

“I wish Linda could see that.” Emma whispered

“She does. She always talks about how sad Hannah has been since the accident. She cries about it. In the end, her fear won't let her do anything to change it.”

Michelle looked him in the eyes, angry that he was willing to stand by and allow his daughter to waste away. “Maybe you should.” She immediately wished she hadn't said it. It wasn't her place. She had no idea what their situation was but she went on anyway. “They make special saddles for people who don't have use of their legs”

“Wait, does that mean Hannah could actually ride on the horse?” Emma asked a hint of excitement in her eyes.

“Theoretically yes but I don't know any of the details.”

Ben stared at Hannah, her giggles rising as Magic nuzzled her hair. “She was always such an active child, she never sat still, was rarely ever inside the house for long. She has been doing her own research. Different types of horses, different activities..how to care for a horse… She tries to talk to us about it at the dinner table, Her face glows like the sun. It drives Linda crazy… I hate the look on her face when Linda tells her she can't do any of those things, she should start looking for things she can do from the chair… could you get me the information on the riding thing Michelle..”

Two weeks later Michelle stood at the fence with Magic, Hannah sat in her chair next to him wearing a blindfold. “Are we ready?”

Hannah opened her eyes to a woman she didn't know standing next to magic. She looked at Michell in confusion.

Stepping forward Michelle said “Hannah this is April. She works at a local ranch that teaches riding to people with disabilities like yours.”

Hannah's face brightened, she sat up straighter in the chair, looked at her aunt, then her dad, and finally at Michelle “You mean I'm going to ride? How”

That's when April stepped forward. She placed her hand on the saddle “This saddle is specially made for people who can't use their legs. Your first few lessons will be short, we don't want to overwork your muscles..”

“When can we start” Hannah interrupted

Magic stood quiet as Ben lifted Hannah into the saddle. “Lean back against the high piece behind you” April instructed as she strapped her legs in. She gave her a few instructions before she began leading her around the pasture.

They had been riding for about ten minutes when a car pulled into the driveway… Linda's car.

Linda slammed her car into park before it even stopped moving. She threw open her door and jumped out without turning off the engine and ran towards the pasture

“Damn it!” Ben cursed and hurried to intercept his wife. He grabbed her by the arms and held her tight.

“I knew it, I knew you were up to something!” she said trying to pull away from him. Her eyes filled with tears “Get her down from there!”

“Linda, if you are planning to go into the pasture you need to calm down first. You don't want to spook the horse.” He didn't like using her fear as a tool but it was the only thing he knew would work.

Linda took a deep breath and wiped away her tears “Get her off that thing before she gets hurt!”

Ben led her to the pasture “Okay, but first Linda, look at her. Really look at her. When was the last time you saw her smile like that?”

Linda pulled free of Ben's grasp and stepped forward.. Her face softened as she watched Hannah trot towards her. Her daughter's laugh warmed her heart. Ben was right It had been a very long time since she had she a smile like that on Hannah's face... A smile that actually reached her eyes.

“Mom, did you see me trot!” Hannah called

Linda nodded “Is she strapped onto that animal? Is that safe?”

April brought Magic back around and stood him in front of Linda “Nothing is one hundred percent safe. Hannah, what do you do in case of an emergency?”

Hannah pulled a strap near the top of the saddle and her legs came loose.

Ben stepped behind his wife and wrapped his arms around her. He kissed her cheek “I know you're scared. I am too. I don't ever want her to be hurt again but that isn't realistic Linda. There is a difference between surviving and living. We helped her to survive now it's time that we help her live.

Linda leaned back against her husband and sighed heavily. “Okay. I'll try.”

More stories from Kelly Deary and writers in Fiction and other communities.