by Nathaniel Hawkins about a month ago in Fantasy
Report Story 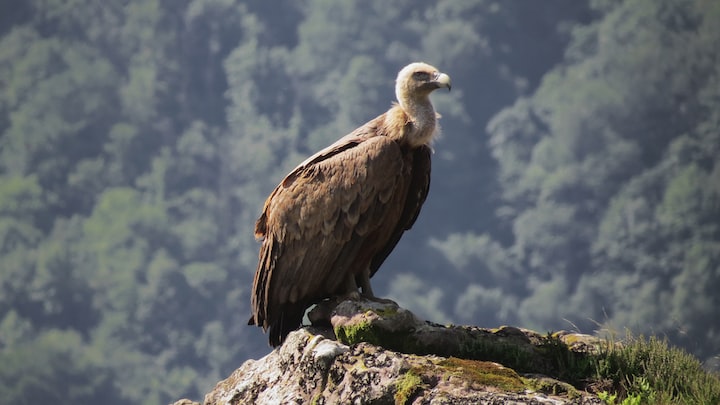 Photo by Les Argonautes on Unsplash

Marayva strolled along the edge of the swamp with her back straight and her head held high. She knew that they would be watching through the crows, skunks, and other creatures that favored the night bond. In truth, she found that she drew a lot of pleasure from them watching her defiance. A thrill ran up her spine as she crested the last hill and saw where the three unlikely pieces of nature met.

Something had happened several hundred years ago. That was the only thing they knew about what had caused half of the continent to experience such a massive amount of overheating. There wasn’t a perfectly set line where it started, but the difference from the swamps and grasslands was rather stark compared to the seas of tan that rolled before her, still yet ever swirling.

As Marayva approached the edge of the biome she checked her bag. A couple of fresh newts still wriggling around, some dried toad tongues, four large glass bottles of water, and an assortment of various bones and bloods in the work bag she carried at her side. She also kept something within the hidden compartment in the back of her robe. The book inside was small, only about a pamphlet, but it was every bit of magic that had ever been so much as scrounged together with bits of desert beasts.

She’d chosen to redo her entire wardrobe. Well, less redo and more donate to the schools. All she’d asked for was what she was wearing now and two extra sets. White robes ran from shoulder to ankle as she strode up to the point just before the desert. Supposedly the layers would help with dispersing heat whenever she got a good wind under them and would still keep her protected from the sand. She’d thanked each of those ladies and had cast her most potent blessings on the three, her mother and two of her teachers. It had taken the only blue dragon eye she’d ever managed to get a hold of, but she knew the ingredient would have melted in this heat.

Turning to look back Marayva could see that most of the familiars and sight beasts had left the swamp, favoring spots where they could more easily watch her take the first steps. To her surprise Marayva even saw some of the witches who had banished her walk out with resolve on their faces. They didn’t seem to be thrilled with what was going on, which she was a little surprised by, as she’d expected them to be partying back in their cabins and huts. But instead, the three leaders of the Worokoven Swamp of the Lesser Swamp Witch Coven stood to say goodbye. To Marayva’s shame, one of their men servants also joined them with a pillow. On it sat a seal of their people. A large toad that appeared to be hiding within murky water’s depth peaked at hear as though it could feel her desire to destroy. The man servant walked up and prostrated himself, proffering the pillow to her without ever looking her in the eye.

“Mara.” Yillnet said. “Take with you a sign of our people. A designation to those who would seek to harm you for being covenless. This isn’t a banishmen-”

Marayva spat on the seal and held herself from kicking the boy servant in the face. He was as guilty as the crows and the skunks were and she would never have hurt them for the sins of their short-sighted masters.

“This is as much a banishment as what I’ve done is an insult. Don’t bother coming out here to try and ameliorate me just to show the others that they aren’t strong enough to walk away.” She didn’t scream. She would never give them that satisfaction. She was cold, firm, and above all she was strong.

Instead of them smirking and taking the high ground like she had expected them to attempt, she could see the pain in Yillnet’s eyes as they stared at the sigil. Marayva didn’t know if it had been made for her especially, and she wasn’t certain that she could handle knowing right now. This wasn’t something they’d been forced to do, but she knew why they’d done it. She blamed them, certainly, but she might have done the same thing from her position.

Yillnet made a clicking sound and the man stood, backing away with head still bowed until he had reached her. As she pet his side the oldest of the three crones spoke up.

“You have abandoned our ways child. You knew the rules of the coven, and your age is not reason enough for us to have forgiven you. You put us at risk, and we merely sought to let you know that you are not completely alone.” Tora said, disapproval and outright anger marring her already wrinkly visage.

“You abandoned me far before I made my decision. My mother didn’t deserve what she was given just because she had me. None of us did, not even my worthless man of a father. She would be doing what I am now if you hadn’t practically crippled her!” Passion loosened her lips enough to let the last comment slip. Marayva knew it was her time to go, any more time spent here would just make a bad situation worse.

The three coven lead witches gathered themselves and refused to acknowledge her any further. They trudged back into the swamp, a few of the night animals making their way out of the day’s sunlight. It was at this point that Marayva counted out just how many animals had joined them only to find that it had been an argument displayed before the entire coven.

This time her pride had dissolved into shame. Even the anger at the coven leaders bled into anger at all of the witches in the swamp. To sit and watch as she aired her family’s private pains so publicly, all while knowing that her mother would have to sit an endure the reactions of everyone who hadn’t known up to that point.

Finally, cheeks flushed and magic welling at the tips of her fingers with nothing to put it into, she straightened herself back up and walked into the desert sands.

Hours passed, and she was no longer certain that the old wisdom from the book had given her what she actually needed to know. It spoke of hidden springs and tucked away watering holes where the animals of this vast sea of sand got their meager helpings, as well as some ways to make the helping less meager. None of that was helpful to her, however, if she never found a natural source of water to begin with. The thought of trying to save some of the water inside of her flasks as to make her own pool crossed her mind, but she knew that trying wouldn’t be fruitful and would just leave her with less resources than she had now. Still too novice.

The creatures of the desert had also begun to evaluate her and her wares. She knew they could feel the magic rippling off of her, something she was certain came from the fact that nothing stood between her and the elements to block her natural magic funnel that witches had. Only the largest of the beasts would ever been seen by her, as was usual when someone looked for their familiar. They were sizing her up, but also displaying themselves to be courted. If there were creatures bigger than what was showing herself off to her, she wasn’t certain she wanted to meet them.

Eventually Maraya found what she’d been hoping would give her brief respite. A vulture, easily the size of her once it spread its wings, has been circling the cave from high up in the sky. As she approached the entrance, it perched itself atop the lip of the cave and chortled at her in what she assumed wasn’t an aggressive manner.

Walking in, the temperature dropped by 10 degrees at least. The farther in she went to what was a surprisingly large cave the more that the temperature started to align with what she was more accustomed to.

There was a set of makeshift stairs within the cave, which she had trouble seeing as the light coming from the entrance dimmed. Night was coming on, and more of the creatures that she would take kin to would begin to make themselves known outside. She’d need time to adjust to a new sleep schedule, but witches were forced to keep wild hours that would vary depending on whether or not they had their turn at the spell cauldrons in the swamp, a rule that she had not been very excited by.

Going into her bag, she fished out a live newt and crushed it directly into her palm. She made certain it was well and truly gone as she closed her other fist around the first, and when she opened it back up all that was left inside was ash and dust that she blew out into the new chamber she’d entered.

Beautiful luminescent glow erupted from all around the room, and she cooed to herself as she finally found what she was looking for. There, inlaid into a hole in the ground sat the first pool of water she’d seen since leaving the swamp. Using everything else she had in her bags, she tossed all of her ingredients in and mumbled a dozen words while stirring the pool with her hands. She could feel the murky water clear and clean itself even as she closed her eyes.

One she was done she turned to see the vulture had walked up next to her and was cooing at the water. As she curled her hand around the creature, she sighed contentedly. This, this was where she would get her revenge.