Sukie in the Graveyard

She heard them singing about her A1 body with a face to match and it made her blood boil. They had said she needed to act as pretty as she looked, but she rolled her eyes at them. They didn’t like her attitude. 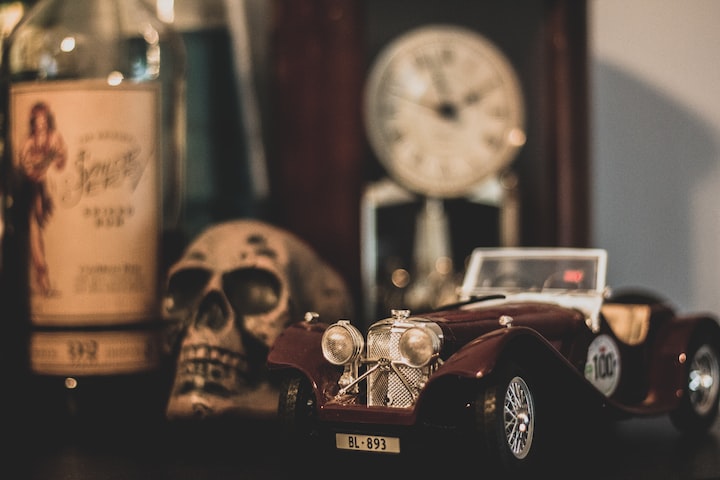 Photo by Ivan Mani on Unsplash

The clock that sat on the bedside table showed eleven-thirty, but it was wrong. It wasn’t wrong in the sense that it needed to be reset, or even wrong in the sense that if it were reset it would be right. Instead, there was something fundamentally backward about its operation that made time speed slower or incrementally accelerate until it never actually told time at all. It never was and never would be correct. Seeing as it was completely useless as a timepiece no one knew exactly why Sukie kept it.

Maybe it was the beauty. The face, the casing, the hands, and even the numbers were carved oak and cherry, deep tones of earthy brown and smoky red. Here and there was a knothole or a crack that showed the antiquity of the clock, adding to its rustic appeal. Upon seeing it for the first time, after a moment of admiration, the viewer would wonder exactly how it could possibly still work, how the pieces still fit seamlessly together, how the little wooden hands still spun around the oaken face.

Perhaps that was it. Sukie kept the clock not because of the beauty but because of its ability to merely live and tick and tock. Maybe it was something about the way it drudged on in never-ending struggle, determined to grasp the last strands of being even if it was utterly wrong, and how it persisted through the uphill battle with the last of its strength and drove its maxims through the air with every tick, tock, tick, tock.

Or maybe she was simply too lazy to get rid of the piece of crap. That was probably it, they said. Whoever they were. She heard the keepers of the house whispering about her through the crack under the door. She hadn’t seen them since she’d been sent here but they were always watching through the camera hidden in the air conditioning vent.

She sat on the bed in the center of the room, next to the table that held the clock. It was neat: green and blue plaid patterned comforter carefully draped over the mattress, all wrinkles patted out with the pillow fluffed at the head. The foam topper left indents where the sleeper had been like a soft reminder of how things used to be, how things should be.

Judging from the bed, the room was tidy but it wasn’t the bed that was the matter. It was the rest of the room. It was dirty, no—it was filthy, really, Smudges on the mirror, layers of alternating dust and rubbish on the vanity, clothes strewn all over the floor. A pigsty, they had said. She was a pig. How could she live like this?

They had told her to clean her room up, clean herself up. She needed to be a lady. Soon she’d be off in some college dorm with nobody to remind her what to do and how to do it, so she needed to learn the tricks now. They needed to guide her and shape her to fit in with society, play with the dough that was her mind, rolling, cutting, flattening it until she met the standards somebody somewhere had set and she’d be on her way to success. They knew how the world turned. They’d been young once, too.

She got up off the bed. She was a pretty girl: blonde hair to her shoulders and round eyes the color of coffee beans mixed with oak bark. Her face was shaped with a gently curving brow, full cheeks and thin lips, a slightly upturned nose. Everyone she knew told her she was pretty, cute, beautiful even and she was tired of hearing it. She heard them singing about her A1 body with a face to match and it made her blood boil. They had said she needed to act as pretty as she looked, but she rolled her eyes at them. They didn’t like her attitude.

Sukie began to pick up the clothes on the floor. The clock seemed to shout louder than usual. She threw them into a pile to be sorted with later. Clothes, layers and layers, shirts, pants, underwear, socks flew. Tens, hundreds, thousands of articles. Millions. Billions. Where had all these clothes come from? Surely, they were not all hers. It seemed as if she were knee deep in dirty laundry.

Finally, there was a small open area of floor. After a while she realized these garments could not all be hers, they couldn’t be. The pile was growing, reaching its filthy hand towards the ceiling fan. Then it was falling, straining towards her face. It wanted to grab her, keep her locked up in some idiotic state of mind where she could do no harm.

Tick, tock sang the clock. She looked from the now spotless floor to the pile of clothes to the dirty vanity to the cock and the bed. The bed. Perfect, crisp, clean.

She wouldn’t do it anymore. Sukie didn’t care about all these things. She grabbed her clock, opened the door, and left.

Hi! I'm a queer multimodal artist writing love poems in Seattle, one half of the art and poetry collective Eat Yr Manhood, and head curator of Stone Pacific Zine. Work in The Rumpus, Occulum, Peach Mag, dream boy book club, and others. :P