by Melissa Eaves 11 months ago in Series
Report Story

of teddies and pets: Part 2 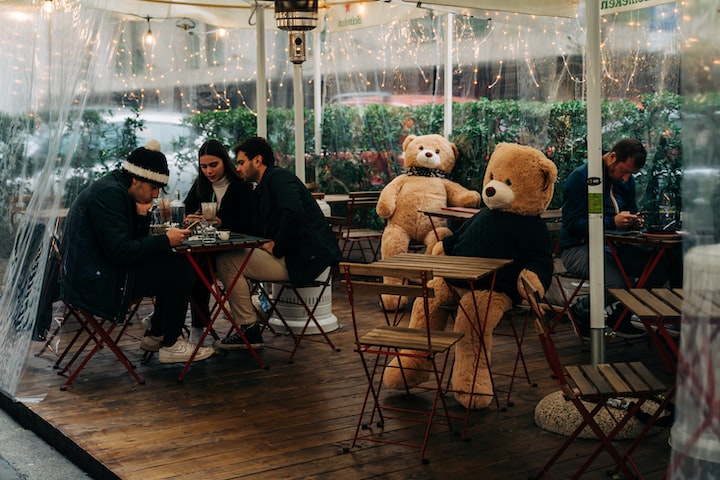 Once on board the train, my thoughts became calmer and I decided that this, underground thing might be to cool for school. It gave me time to think about society and my traitor of my once soon to be husband.

I replayed the events of the last few weeks, and in the 20/20 of hindsight, I noticed a lot of things that I had previously disregarded. There were subtle indicators such as; the slight shift of the eyes when I asked him where we was, the meeting of his eyes with my best friend over my head, and the way he had quiet converations that died when I entered the room.

The more I thought about it the more, that my mind realized that this nefarious occurence was not benign of him, nor them. I could not pretend to understand why, it was all I could do to actually ackowledge the reality. And in addition to this, I had to question my own person. The adages of whats wrong with me, played through my mind like unwanted footage, that I knew better than.

I changed my focus of thought, and wondered at the life that I would now enter. The subway train hurtled through the tunnels with calming alacrity. I allowed the flow of it to soothe my nerves. I loved the anonymity, of the subway system. In normal times, I would just ride the subway when I was upset. It was a place where you could be alone and with others.

In this present time, I casually observed the other passengers on the train. They were ragged and exhausted. There were fourteen of us, that had made it out of the blast.

The policeman who had led us out, there was a lady, a couple, a group of four adolescents, a priest, a family with a few small children and an infant, and myself.

We pulled up at, another station. We were met by a small group. A large woman, a black man, and a couple of young adults greeted us, with a group of children. The large woman held a smiling infant on her hip.

As we joined the group, we were helped into, a buggy and sped away down the halls. As we traveled. the big guy spoke loud instructions and welcomes. " I assume you read the signs, hatred not be tolerated. You will be provided with essential items and we will determine how things will work as we go. Your contributions will be determined, as we go. Lay back and we will get through this."

We came to another platform, and there were elevator doors. Ae we crowded around, the leader of the group stopped.

" My name is Jon and this is Star, my wife. This is Sarah and David, and the kids you will meet a little while later. But this guy, he swang the toddling infant off the larger woman's hip, this is Seth."

The seven year old, here, that thinks she knows everything, her name is Bianca. Before me stood a pig-tailed girl, with electric blue eyes and a sweet self-absorped smile.This scabby kneed boy is Joey,he pointed at a thin dark boy, with trails of dirt and a mischevious little look in his sparkling brown eyes. the little one is Rainee. Rainee was a character, she was a tiny little waif, with a delicate elfin quality to her, who merely stared at me. When I looked at her and smiled, she smiled back.

The most ebony skinned and elegant little girl, I have ever seen in my life stood shyly back. Her hair was pulled back into a tight little bun at the back of her neck, and her larger bone structure, held a little extra weight in perfect, almost adult symmetry.

"Come here, Shayden. This is Shayden, she is our resident librarian and work out guru. "

With that final introduction, the elevator doors opened and off we were spirited deeper into the main floors of this subteraanean station. The air was cool and dank. The smell of earth and permeable.

"We have stations to simulate sunlight, rec rooms, bathhouses, and a garden. Each person and or family unit will have their own living quarters,I'm tired. Star's tired and the whole damn day has been bunk. so I hope to give you a stronger welcome tommorow. As for tonight, I will show you eats, your rooms, and the shower house. "

As Jon talked we were led into a gleaming stainless steel kitchen. A woman was standing by the sink. As she turned to greet us I was stricken by her holographic and serene green eyes. "This is Aria."

Aria greeted us warmly. She opened the stainless restuaraunt sized refrigerator and began removing a selection of items and splaying them on the counter with a tired flair.

"There are cold cuts, real cheese, and homebaked bread. if you want the bread, you will have to slice it. To your right is a pantry, with baked crackers, and chips with various seasoning that I fried myself. They are labeled." She then produced, a large container from the fridge. "Here are vegetables freshly ripe, tomatoes, cucumbers, peppers, romaine, and spinach. She threw another tub casually on the counter. " Homade spinach and artichoke dip, with chicken. I'm sure there is just enough to go around." Olives, and fresh salsa complimented the spread.

"When you finish eating, there is a living area to the right, feel free to have anyone show you to your rooms. We have had a hard day, we have already observed your aptitudes and charted your capacity for violence, we hope you don't mind" With that she turned and walked out. A seeming woosh of air followed her out.

Around the island that Aria had, placed the food were stools. We made plates. We ate, and the food was thick and fresh and whole grained goodness, that brought morale back to life. We had already developed a silent camaraderie from the mutual survival and certain betrayals of our packs, but after eating we began formal introductions.

The policeman's name was Nathanial. The lone lady, her name was Rosetta, and her eyes were gray and unreadable.She had worked as a teacher. The couple, who were Asian, were Ian and Angel. The four adolescents intoduced themselves as follows.

"I am Alexander," said a lanky mohawked and earnest faced boy. I am fourteen and these are my friends. Jonathan nodded and proffered a hand, bald and freckled. Sheldon, tossed a green lock from his eye and dipped in a sardonic and self affected curtsy. I was sure it was a definitive nod at the familiarity we already felt. " Matt," said the dreadlocked magnetic boy in the back of the group.

"Father Timothy," said the priest. "You can call me Tim."

The family introduced themselves last. Their children had been quiet, stoic almost and the family was definitely self contained. "I am Roger, this is my wife, Magenta, my children, Tommy, Davie, and Broden, and the baby is Serindipity, "

Adrenaline having worn off, fed and needing solitude, solace and some sleep, we wandered into the living area and were shown into the shower rooms and what were referred to as living quarters. As Aria had waited for us. Before we were given our freedoms to shower and board ; we were taken to a room with shelves of clothing, linens, and towels.

The clothing were labeled by size and style. We were also given personal kits, that held toothpaste, toothbrush, various soaps, and shampoos. The towels were rough and fresh and the sheets and blankets were clean, stiff, and smelled of bleach and laundry soap.

The shower rooms were in a large hall shaped structure and were built to have fully privatized stalls. As I stood in the shower and let the hot water steam over me, I ached for a lost life, and gazed at a new one. In this moment, I was grateful for all of these small comforts, for I had survived, against odds. It's hard to explain what one feels, when the comfort, balance, and possiblity of humanity is in a restorative process. But I was familiar. I wondered how the others were faring and realized that I didn't care.

I dressed picked my linen, and care package off the floor. I found a room among the rooms and claimed it. It was small and flourescent light streamed in from the door crack. I lie awake on my bed for awhile. But I didn't cry. I contemplated. I felt grateful. I absorbed the comfort of the mattress and fresh bedding and dreamed of the day when it would be safe to return to the outside.