by J. L. Cross 12 months ago in Fantasy
Report Story 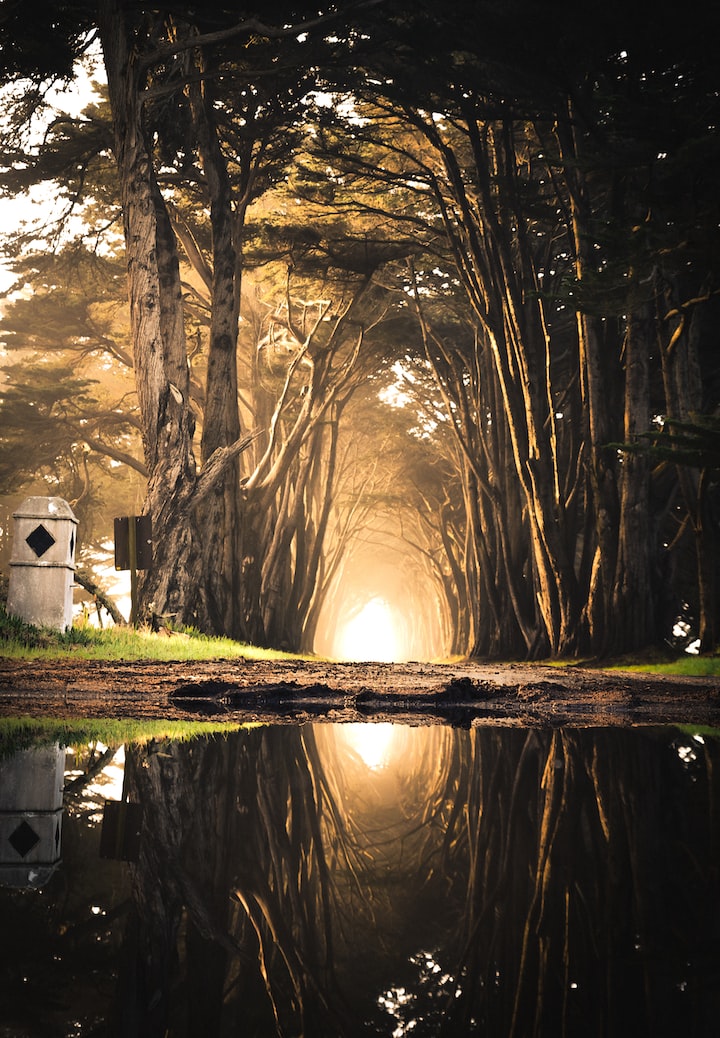 I remembered all that happened, some of it, the worst of it. I pulled myself into the fetal position; my bones cracking and snapping back into the position they were intended to be in while my screams echoed through the green sun covered forest. My breathing was heavy, rapid, and painful. I could feel the fast rush of air into my lung and the pain that followed as the expansion guaranteed me further moments of life. I could hardly understand why something so awful could happen, but life could prevail. It was a sick and twisted joke.

I remember their hands, pulling at my wings in either direction as I fought back against them, trying to pin my wings into my body, but they won the battle. As they pulled my wings separated from the bone and flesh that held them there. Blood had cascaded over the surface of the white marble flooring. I had braced myself on all fours, the searing pain pulsed through my body like my spine had been torn from me or my organs pulled from a hole in my back. I slumped there, letting the pain claim me. My vision was blinded, their faces unrecognizable. I thought I remembered, some of them didn’t have a face at all. A void staring back at me, no features, just the dark contours of where their eyes, mouth, and nose would have been.

My screams echoed internally, I was fighting against my mind, trying not to hold myself hostage to what had happened. An ache in my back reminded me of what was taken from me so quickly and so forcefully. As time moved forward and the pain abated from my lungs and body, easing out of my bones, I lost the memories of the event. I was left with only the memory of who I was, a fallen angel. Abandoned child. A lost whisper soon forgotten.

I stood, naked and glowing against the lush green foliage and moss cover trees. I pushed for my wings to expand, fighting against the locked feeling in the core of my being. Then after struggling they appeared- lengthening and stretching out from my sides. There was nothing left of them. A cry escaped my lips as I brought them in to hug my body. There was nothing left of them. The soft grey feathers that covered their length were now gone, all that was left was a black velvet, a black depth to hold me and comfort me. Black talons curled from the tips like fingers.

I wasn’t just cast from my eternal home, away from my friends and family, they were the ones that had undoubtedly done the casting. They stripped my gorgeous wings and threw me to the mercy of the Underworld. I was a gift to the raging monster that crept deep in the abyss of the Underworld. I was a Fallen Celestis, offered to him and spit back out, broken and mangled, destined to walk the Earth as his pawn. I was an offering to the monster that could swallow the armies of the Overworld in one bite. No Celestis has seen the monster in the deep. They beseech him with gifts so that they would never have to.

As the rage quieted inside of me I folded my wings into my back and rubbed a shaking hand down the length of my body. Fallen or not fallen, I still had the powers of Celestis, except that to get me home. As my hand moved over my breasts and down my side a tight stream of black smoke protrude from the tips of my fingers and hugged my body, as it dissipated it left behind a black tight tank top in the softest material that clung to my skin and the hem stopped just over my navel. Over my hip and down my legs, black skin tight jeans and boots.

I straightened, cracking my neck and knuckles. There was a fold somewhere on the Earth where the Overworld, Underworld, and Mortal World intertwined. I had to find it. I’d pull the wings from the back of anyone that got in my way, any heathen that tried to prevent me from getting my sweet revenge would be split in two and devoured. I wanted to go home.

This body and this world were different from the others, everything felt more intense here. I stepped forward, the ground crunching under the weight of my boot. I had trouble keeping my balance and moving in a straight line. My head was foggy and heavy. It would take me a while to get oriented, but until then I needed to find somewhere to rest.

As I stepped one foot in front of another a black mist swiftly circled me, caressing the sides of my body and pulling me upright. I was falling over, losing my wits quickly. I stopped and waited for the mist to dissipate, but it made motions around me faster than my eyes could keep up with. I got dizzy just trying to follow it.

The mist gathered in front of me, shaping itself into a being, a man. I watched as he appeared through the mist, shirtless and confident, his wings curling out of him quickly. He let them stretch, his mouth pressed into a flat line as he studied me, his eyebrows pinching on his brow.

“You’re not who I expected to join me.”

“I was thrown out. I was stripped of my wings, I wasn’t intending to join anyone.” I moved to pass around him, bumping my shoulder into his chest as I moved. His touch was cool and lifeless. As I passed he grabbed my arm, yanking me back into his direction and pulling me close to him.

I tried to pull my arm from him but his strength was even greater than my own. Heathens here often fought for control and dominance, I would have to fight him for the right to get away from his grasp. Until I displayed myself as the stronger being he wouldn’t budge.

His finger traced a circle over my arm, leaving a cool searing feeling on my arm, but with every circle he drew my fight died inside of me. He was subduing me with a rare art, a rare skill in heathens, the ability to seduce even his own kind. Mortals fell prey to us all, but only a few could use it on our own. His lips came close to mine, a smirk crossing their wicked fullness, showing me his teeth and fangs. Fangs were used to pull our enemies to shreds like animals. It was an uncivilized act. The heathen’s eyes seared into mine, beckoning me to come closer to him, to be swallowed in him and his passion. They sparked with red and dancing black smoke, the pupils pulsing until I finally found the courage to fight back.

Turning into him I place my hands on his chest as his right hand crept up to cup my face and stroke my cheek. The heathen thought he was getting what he wanted, my submission. He was so far from wrong. I looked down at my hands, planting them against his firm tanned chest and looked back up into those brutally gorgeous eyes and dug my nails into him. With a huff of fury I let the mist plume from my hands in a great force, blowing him back away from me and the force of it clearing the air from his lungs.

His wings instinctively caught him as he drifted through the air and lowered him to the ground where he gagged and gasped for air. I went to stand over him and plowed my leg into his face, dropping him into the dirt. He touched his bleeding nose and pulled himself up to his knees, his wings shaking with rage.

With all the force I could muster I bared down and let my wings bite into the soil, pulsing red and flames bursting from the ground where they made contact. He stared at me, eyes wide. He took me in, the smirk returning to his face. I bared my fangs at him and hissed. The crude sound rumbling from deep in my chest.

“Submit!” I yelled over the crackling of the flames and the hissing and black mist encircling us. He didn’t respond. I leaned in closer. “Submit to me.” My fangs inches from his cheek, my hot breath tickling his cheek.

He held his hands out. “I submit.” His eyes looked cocky and daring for more. Heathens liked their foul play and games. I could tell by the look of him and the way he had moved that he had been here for a while. This wasn’t his first go-round, and he was accustomed to winning easily. “I submit.” He repeated.

The sound of his submission made my heart pound in my chest excitedly. Winning a challenge gave me the right to call on him. I would need him to find the fold. The longer the Heathen was here, the more likely they would know where to find it.

I calmed myself and pulled my wings in and let the rage quiet. The flames died and the black mist cleared. I straightened, dusting the powerful dark feeling off of me like it was pollen in the air. There was no way to make that feeling go away. It would live inside me forever.

“You’re going to help me get home. Call me Celeste.”

More stories from J. L. Cross and writers in Fiction and other communities.