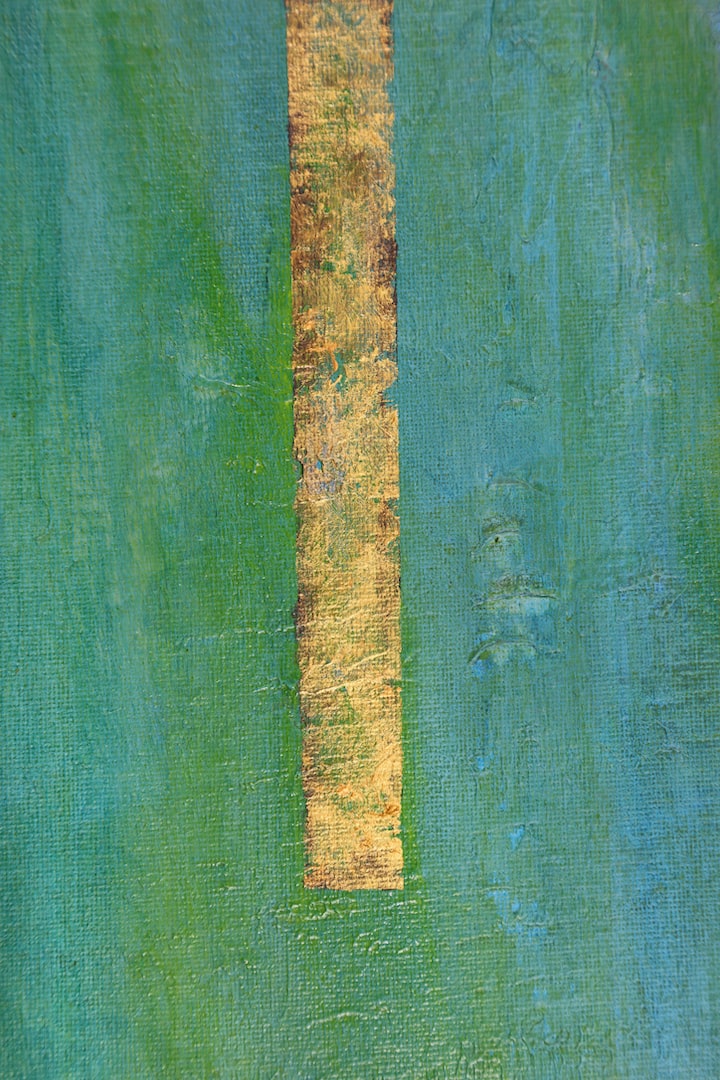 Abstract art enjoys a certain degree of popularity simply because it gives the viewer far too much credit. The critic gazes into a canvas and finds nothing but himself staring back at him. Here is a mirror--how would you rate yourself?

When I was in art school, some thirty years ago, I specialized in hyperrealism. The kind of impossible detail you’ll find on certain famous Renaissance paintings, or that a computer might do in five minutes today. Whatever. My vocation, my divinely inspired gift as it were, to render things exactly as they appeared in the real world on a sheet of paper, a perfect likeness, would have been, had I continued to pursue it, rendered obsolete at the dawn of the twenty-first century. So be it. Robert, my boyfriend all through art school, used to tease me for it.

“You might as well just become a photographer like me, if you keep painting things like that,” he would laugh, as I glowered at him, paintbrush clutched in my hand threateningly.

After all, all art, to quote Oscar Wilde, is quite useless. Its function is that it serves none. And so now, when I look back upon those days I spent capturing the exact curve of a person’s jaw, or mixing the correct shade of vermillion for a sunset-strewn sky, I simply remind myself that I was exalting in art for art’s sake. A noble pursuit, if there ever was one. A pursuit, best left to the young.

Anyways, when I was in my twenties, I had a boyfriend. Horribly attractive, with piercing brown eyes and this elaborately styled bottle blonde hair. He would wear leather jackets and ripped jeans and nothing else, slouching into class with a gloriously irreverent scowl on his face. He was a photographer. And he would end up becoming a rather famous one, as a matter of fact. The sultry, private bedroom nudes he took of me, for example, now hang in the MET, and plenty of normal people walk past them with their eyes politely averted. Whatever.

We met in a Portrait Composition Seminar at the Pratt Institute in Brooklyn. When our professor complimented a painting of mine, an absurdly practical rendering of a little girl I had seen playing in central park, complete with a sprawling gap between her two front teeth, and each strand of red hair outlined meticulously, Robert had scoffed.

“Tell me, what’s at stake here?” he goaded, gesturing to my canvas, his eyes crackling and imperious. I swallowed hard, blushing, annoyed and ashamed at having to articulate my thought process to the rest of the room. I had moved to Brooklyn straight from high school in Ohio, and so I was not comfortable in this city, which was supposed to be a safe haven to my kind. I was not yet out.

“It’s a commentary on potentiality and limitation,” I began, stumbling over my words. I was going to sound arrogant and supercilious and pretentious and I hated myself and the boy who had put me in this position.

“The figure of the child is one traditionally cast in associations of purity and preciousness. Being what I am, looking at her, engaging with her, painting her, might theoretically compromise the very futurity of this country. What’s at stake is the issue of influence, of bigotry, of sin, if such a thing exists. What’s at stake is what is always at stake when two souls brush past each other, possessed of different subjectivities.” I broke off.

It had been sufficiently vague and sufficiently academic to satisfy our teacher, but I knew it would only prove my attacker’s point.

To my surprise, as I glanced up at him, I saw that he was regarding me with something like appreciation.

After class, he had loitered behind to talk to me.

“What did you mean when you said ‘Being what I am’” he hummed softly, not looking at me. My throat tightened, and I licked my lips nervously.

“What do you think I meant?” I stalled. At that, he let out a booming laugh, and I was caught in how the muscles of his shoulders seemed to unclench themselves. It occurred to me that I had never wanted to paint someone quite so badly.

“I’m Robert,” he offered me a smooth, tan hand, his eyes glittering knowingly.

“Well Adam,” he pressed, stretching magnificently as I averted my eyes, “Will you let me take you, and your ambiguous identity out for coffee? I have a break before my Advanced Photography Course.” I realized, with a combination of longing and horror that this beautiful boy was flirting with me.

And so I nodded, mouth dry. That coffee turned into two, and then five, and then somewhere along the way, I tricked that sweet, brilliant Adonis into falling in love with me, a gawky, spectacled closeted boy from a state with more cows than people. All is fair in love and war, I suppose.

When Robert died of an overdose at the beginning of his senior year, and my junior one, I found quite suddenly that I could no longer hold a paintbrush.

Well, that is not quite correct. I could hold one, loosely, with the kind of fatalist grip a toddler might employ. The oil paint, when applied to paper, came out in impossible, sloppy jerks. Every canvas I touched resembled the first proud work of some preschooler returning home from the first day of school.

Grief, it seemed, rendered me useless. A regression of my former self.

For many months, I would simply scream at my compositions, overcome with rage and worry. Howling into the easel at my own misfortune. I had lost my love and my gift in a single stroke, it seemed.

Some friends of Robert’s piled together a bit of money to send me to a psychologist, which was terribly decent of them.

My doctor was a middle-aged woman with striking, fuchsia colored lips and dark skin, and it occurred to me as I sat down across from her for the first time that if I were a little more myself, I would have liked to paint her. It was she that turned me onto abstract art, not as a new calling, but as a kind of temporary therapy to tide me over until my faculties returned.

I could, she explained, render the conversion of St. Paul in a few, uncanny boxes. I could paint a portrait of my entire family in a single shade of magenta. This and more were within my grasp.

“What was the last piece you were working on before Robert passed?” she inquired during that first session.

“A still life,” I shrugged, “Kind of a Cezanne type fruit bowl set up, but in lieu of oranges, there were a multitude of pears.” I halted in my speech, feeling nauseous, as I always did now when I considered art.

“Yeah, growing up, we had this pear tree back in Ohio. I used to sit under it for hours and just like, pray, I guess? Pray that I would start liking girls. Stop being into men. That sort of thing.”

“I see. And so this painting was a kind of, what exactly?” she waited for me to elaborate.

“A domestication of queer longing I guess. You take the pears out of nature where they exist, and bring them inside the home, the inner sanctum of the nuclear family. You put them in a bowl. You paint them. It’s a picture about being trapped.”

“Because you felt trapped.”

“Yeah, I guess. But isn’t this supposed to be about Rob?” I broke in, annoyed, tears pricking at the corner of my eyes.

“I like to think that everything is connected,” she replied, staring at me, “Maybe this week, you go home and you work on that still life. But remind yourself that it doesn’t have to be perfect-- it doesn’t have to be realistic. It can just be what it is-- what you are in that moment. Does that sound okay to you?”

And I nodded, even though nothing had been okay since I registered that the best loved part of me was banished from this plane, to an afterlife neither Rob nor I had ever believed in.

Still Life with Pears, when it was completed, looked nothing at all like the bowl of pears I had used as my model. It was a wave of tidal green, bisected by a golden wound-- the pit, I imagined. The curves of the fruits were indistinguishable, and there was no background. There was not even a hint of realism. Despite myself, I felt rather proud of it.

When I brought it in to my advisor, a few weeks later, she had regarded me carefully, like a bomb that might go off at any point.

“What do you imagine is at stake here?” she asked, and I was transported back in time to that afternoon where Robert and I had first collided.

“Nothing more or less than the entirety of my soul,” I shot back, burning with the weight and passion of it.

“Good,” she returned simply, patting me softly on the back, “I’m glad you’re back. And I’m glad that you’re different than you were. Art requires transformation, and adaptation. It requires feeling, no matter what that feeling may be.”

From that point, it seemed abstract expressionism was just about the only medium that meant anything to me. And I suppose I’ve gotten rather skilled at my niche. After all, in a wing on the opposite end of Robert’s at the MET, a few of my paintings can be seen as well.

And chief among them is Still Life with Pears.

Abstract art enjoys a certain degree of popularity simply because it gives the viewer far too much credit. The critic gazes into a canvas and finds nothing but himself staring back at him. Here is a mirror--how would you rate yourself?

I find that when I look into my own paintings, once they are completed, I see nothing at all, but I feel a great deal.