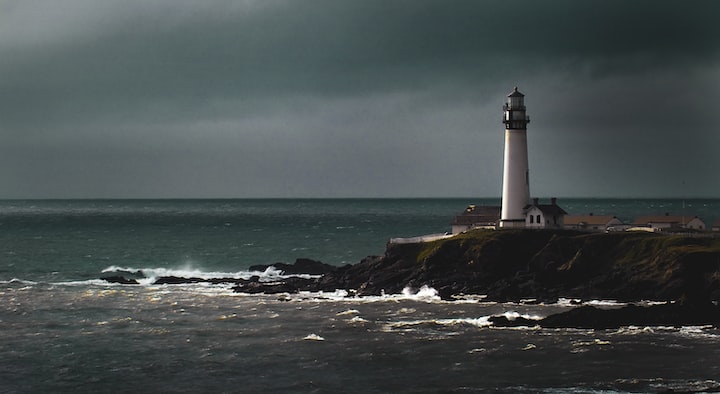 Photo by Daniel Gregoire on Unsplash

Edward saw the ship approaching the lighthouse in the fog. He stood in the lantern room, the light of the beacon rotating, spreading its beam across the horizon. The Fresnel lens that encased and transmitted the light looked as if a large bird had laid an elaborate glass egg. Edward loved watching the light move, refracted through the rotating glass oval. Many ships owed a debt of gratitude to this marvelous invention. It was one of the latest in design.

The ship moving toward the shore seemed to also be of recent design, for Edward could not identify its type. It was a steamship of some sort—more and more ships were powered by steam than sail these days—but this one didn’t have a wooden hull. Was that iron? An ironclad ship would certainly be beneficial in battle, but since when did the Royal Navy start building them?

Perhaps it was a wooden ship with a hull plated in iron. He once saw a bomb ship refitted for polar exploration with iron sheeting along the sides of the bow to strengthen it against the crushing ice. But a ship entirely made of iron?

Living here at the lighthouse on a far-flung island meant that Edward never heard the latest news and developments. He rarely saw another face that was not his own in the mirror. He lived alone, the closest town miles away by ferry. Once a month, someone from the mainland would bring him supplies and rations.

The days blended together, one after another. Everyone always said time stood still at the lighthouse. Without another person around, it was easy for Edward to retreat into his mind, getting caught up in flights of fancy. Sometimes he thought time really did stop on that island.

The ship changed course, finally spotting the light through the fog. It avoided the shoreline, sailing parallel to it. Edward watched this strange ship disappear from sight.

The fog was thick that night, the beacon cutting through it like a knife. It was quiet, very quiet. Edward finished some maintenance, ate his humble dinner of hardtack and smoked pork, and returned to the lantern room.

The fog obscured the ocean he knew lay before him. It made the lighthouse feel as if it were separate from the rest of the world, cut off from reality. Without looking at his watch, Edward could not tell how much time had passed. Eventually he went to bed.

When he woke, he checked the lamp to make sure the beacon still shone. All was well. He glanced out through the glass walls of the lantern room at the gray morning.

The sea was choppy below, a ship rocked by the waves. But this was no ship Edward recognized. This wasn’t even like the iron ship he’d seen the day before. The ship was huge, made of metal, and had an almost entirely flat deck, except for one cabin in the center.

What a bizarre design. Why make a flat deck? Wouldn’t sailors fall overboard without the gunwale?

The ship sailed around the island and out of sight, but Edward watched it go over the horizon in utter confusion. What sort of ship was that?

He did his usual chores, his mind far away. It would be another three weeks before he received his normal supplies from the mainland. But he wished he could speak with someone else now, ask them if they knew where these odd ships were coming from. Had the Americans made advances in sailing well ahead of Britain?

Edward wanted to go into town himself, but he couldn’t leave the lighthouse. If something went wrong, he was the only one there who could fix it.

He stayed at the lighthouse, time unmoving. Was it just a week since the last shipment of supplies? Or had the days slipped by him unnoticed? More ships sailed around the island, ones he couldn’t understand. He’d never seen such ships before.

There was one ship that looked as if an entire city had been built on the water. How could that be? How could something so large stay afloat? There were no smokestacks. How was it being propelled?

What month was it? What year?

The ships kept coming, looking stranger and stranger each time. One of them played music loudly, too loudly for any man’s voice to sing, as if it were being amplified in some way. People dressed indecently waved at the lighthouse as they sailed by.

But he kept working. The beacon kept shining.

Everyone always said time stood still at the lighthouse.