Sometimes I Don't Mind the Things I Hate

by Josh Workman 7 months ago in Short Story
Report Story

A Dance is Worth a Thousand Words 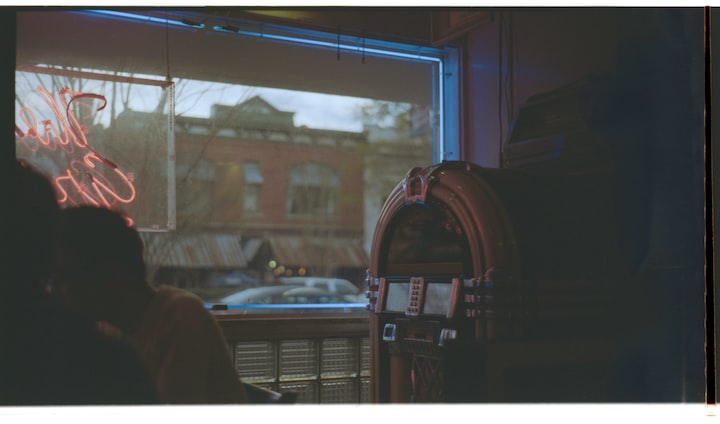 Photo by Milo Bauman on Unsplash

Feet scraped across the floor and two gnarled hands passed them two tall glasses full of a clear, sparkling liquid. They paid with hands that were much younger, much less weathered and glanced into each other’s eyes, pointedly not commenting on the dustiness of the bar or the cheapness of the drinks.

He nodded over his right shoulder, “Should we sit down?”

“Sure,” she said, taking a sip of her drink. He did the same.

She licked her lips and said, “Strong.”

“Trade?” he asked, holding out his sweating cup.

She nodded and handed him her cup. They reached a small, plastic table near the jukebox, which he glanced at before sitting down.

“Yours is stronger than mine,” he said, “I think the bartender wants to get you drunk.”

It was one of those lazy summer days where the time between their replies could have easily been a moment or an hour. It didn’t matter; they were comfortable and they had nowhere to be and no one to see. Above them, the faux-wood blades of a fan spun slowly.

They traded drinks again. She held hers up in front of him. Their cups clinked together softly, and he looked at the jukebox. A song swelled out of it, starting quietly but building building building.

“I hate this song,” he said, “It came out when my parents were dating and they would listen to it over and over again on long car trips. When we were younger my brother would always ask them to play it again. It drove me completely crazy.”

“Then why don’t you play something else?”

He raised his hands in the air and pretended he was drumming, “Because I have no rhythm.”

A smile passed quickly over her face like a summer storm. “That was a stupid joke.”

He took a sip of his drink. “Well, they’re easier to make than the smart ones.”

She shook her head and rolled her eyes and the two of them sank into silence. It was nice, he thought, to find someone who you didn’t need to jabber at, someone you didn’t constantly have to impress.

“Can I tell you about a dream I had?” he asked.

“People usually don’t want to bore others with their dreams.”

He cleared his throat and kept talking.

“So I was back at my sister’s wedding, at the reception, but it was different this time. It was magical in the way dreams are: the dance floor was made of ice and it glowed like it was lit from within and the only other lights in the whole place were these candles that floated around the edge of the hall.”

He laughed and looked down at his hands, which were scratching the surface of the table. “I remember asking my sister about the candles and she told me our British cousin was a wizard. We don’t even have a British cousin.”

She let out an easy laugh from across the tiny table; she always laughed easily.

“Anyway, that’s when I saw him. He looked good, I mean, he always looked good before, but this time he looked amazing. I was all James Bonded out in a tuxedo and everything, but he looked even better.

“It all happened like a movie, this sea of people parted and there he was and there I was and suddenly it felt like we were all alone. I asked him what he was doing there, how he had gotten there, but he just kinda looked at me and smiled and asked if I really thought anything could keep him from being at our sister’s wedding. There was so much I wanted to talk to him about, but, well, you know how I am. I’m not good at talking, especially when it comes to emotions and I just had no idea what to say but then I didn’t have to say anything because he asked me to dance.”

She was watching him carefully; the corner of her mouth flickered up and down like a flame. “But you hate dancing.”

“And you don’t really like people touching you, either.”

“Dream you must be very different from real you.”

He took a sip of his drink and shook his head. “No, it’s not that. Sometimes there are people in your life who can make the things you hate fun just by being interesting or important enough to you. The mere fact that they’re there makes everything okay. They’re the special ones, the ones you have a connection with, and he was definitely one of those people, you know?

“I always felt like he and I would have met in life even if we weren’t brothers. We always worked together in a way that was about more than just being related, so even though it was weird, even though it would never happen in real life, I didn’t mind dancing with him. Hell, I actually enjoyed it, because we got to be together.

“We never even talked; we just danced and looked into each other’s eyes and that was our way of saying ‘you’re special to me and you’ll always be special to me. You’re important in ways I can’t quite verbalize and I’ll always love you.”

He stopped talking and looked past her at the jukebox. She reached across the table and almost set her hand on his. “In all the time I’ve known you, I think that’s the most you’ve ever said about your brother.”

He was still looking at the jukebox. “Well,” he said, “well, yeah.”

Then he looked at her. He didn’t really have anything else to add, but he spoke again quickly before she could say more. “How long have we known each other, anyway?”

“Awhile,” he agreed. His chair tilted back on two legs and he rapped a knuckle on the brick wall next to them. He frowned slightly like he was considering a difficult math problem. “I can’t actually remember meeting you.”

He let his chair fall flat, the two front legs smacked against the floor in stereo sound and the motion shook the frown off of his face. “No, I suppose it’s not.”

“You know, now that you mention it, I can’t remember how we met either.”

He cocked his head to one side and his smile to the other. “Is that important?”

“Yes. No. I don’t know.” She drank from her cup and shrugged a set of skinny shoulders. “Maybe it’s the most important thing in the world.”

He looked out at the vacant room and let her fill the silence that stretched between them. His eyes roamed the bar’s concrete floor, cracked and dyed by the tide of time.

She looked into her almost-empty cup and spoke slowly as she shook ideas from the melting ice cubes.

“Maybe, maybe there are people who come into your life. The really special people, you and your brother, you and me…”

She sank back into thought and rattled her cup again. He didn’t say anything; he was very proud of himself for not saying anything. He wanted to lighten the mood, to joke, to condescend, or to tease her for admitting he was special.

But, he didn’t. Words have power, words are magic, and if he gave her the wrong ones it might break whatever spell she was under.

She took a big swig of her drink and let it coat her tongue with the all right things to say.

“And these people, you forget how you met them because it feels like you’ve known them forever.” She was talking quickly and her large eyes, wide with excitement, stared into his. “Because, maybe, on a deeper level, in your soul, you have known them forever!”

He wanted to speak up now, he wanted to ask questions, but he couldn’t have interrupted her if he tried. She was a run-away train, she was a plane in free fall, she was John Henry with his unstoppable hammer.

“We were meant to meet, whether it was fate, or destiny, or some deity, or just god-dammed luck. It doesn’t matter how it happened, because no matter what decisions we made in life, it still would have happened. Maybe we don’t remember meeting because it’s happened a million different ways; it’s happened to every possible version of us in every possible universe.”

It was as if the world itself agreed with her, right as she finished speaking the song scratching through the jukebox’s speakers ended. For another moment, or another hour, or maybe all night, the bar fell into a deep silence.

He wasn’t sure how to react, what to say, but not talking had gotten him this far into the conversation so he tried that again. He nodded quickly, jerkily, and knocked back his drink.

He pointed at her empty cup with his. “Would you like another?”

And then, when he failed to catch the bartender’s eye, he picked up their cups and crossed the concrete floor. He got two new drinks and walked back toward her, but he only stopped at their table long enough to set down the drinks.

The change the bartender had given him rattled in his hand as he walked over to the jukebox. His fingers tapped the arrows, flipping the faded records behind the dusty window. He was looking for a song that had been popular when his parents were dating. When he found it, he would go back to the table but he wouldn’t sit down.

Instead, he would ask her to stand up.

More stories from Josh Workman and writers in Fiction and other communities.