by Jessica Jolliffe 10 months ago in Fantasy
Report Story 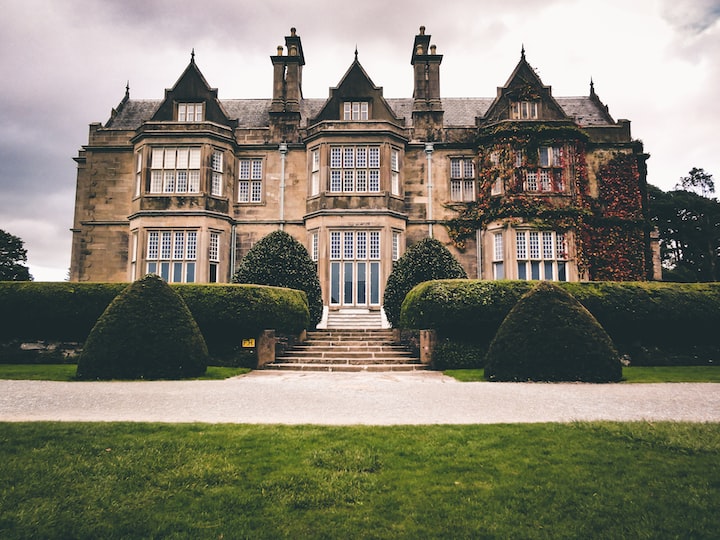 Photo by Fabian Wiktor on Unsplash

Annalise Thorne stared up at the gloomy gothic mansion before her with a heavy heart. This was her new home, Silverwood Academy. Three weeks ago, her father had died, leaving her in the care of her Aunt, Cherise “Sherry” Blackwell. Only Sherry seemed more interested in the family holdings than the 16-year-old girl she’d been saddled with. So, her solution had been to send Anna off to boarding school.

Anna seethed at the memory:

‘It’s the best thing for you darling.’ Sherry had waved her hand to encompass her surroundings. ‘All this will only remind you of your grief.’

But Sherry had already erased so many of the memory’s in her home. They sat in her father’s old office, where Sherry had already removed her father’s heavy oak desk and replaced it with a sleek metal and glass model. Most of the books and photos that had adorned the walls had been boxed and replaced with new trinkets and objects intended to showcase her aunt’s newfound wealth. There was a particularly flashy crystal bull sculpture, that was as ostentatious as it was ugly.

This had once been her favorite room. She would come in here and watch her father work, and he would always make time to catch-up with her, tell her stories of his travels for work, and listen to her exploits with her schooling.

He had been her whole world. Her mother had died when Anna was very young, and so it had just been them. Of course, she’d had nannies and tutors over the years, but her father had been her only family. Sherry had been nothing but a Christmas card once a year, and even those were likely courtesy of her secretary. Perhaps some of that could be attributed to being her mother’s sister, but still she hadn’t been at all interested in Anna before now.

‘I don’t want to go elsewhere for school. I want to stay here and continue with my instructors.’ Anna had responded.

‘Well I’m sorry dear, but that just will not work. Your father left you under my charge and I must ensure that you receive an excellent education while I am away with my work. And as I cannot stay here indefinitely, neither can you.’

‘You seem to have settled here nicely,” Anna had scoffed, indicating her aunt’s remodel contemptuously. ‘Surely your work won’t take you away for long.’

‘Regardless of how long, I cannot leave you unattended, nor can I take you with me. The matter is already settled. You will leave for Silverwood Academy tomorrow.’

Silverwood Academy. Anna hadn't had much chance to look up the school, but from what she had seen, it was no different from any other boarding school. Just a school to bury unwanted children in until they were of age to care for themselves. She had to give Sherry credit for finding one nearly a continent away from her though.

As the taxi driver placed her bags beside her Anna thanked him and proceeded to reach for her bags.

“No need.” The crisp words startled Anna, and she looked over her shoulder to see a rather severe looking woman had appeared, presumably one of the teachers. She continued to address Anna, “Wilson will take your bags to your room.” She gestured to a man to her left, that seemed to appear out of nowhere. “I am Ms. Mandran, Headmistress.”

Anna stared at the woman. She was not at all what one might expect of a prodigious boarding school. The woman was tall, and broad shouldered. She stood steel-rod straight and her eyes were a sharp steely grey to match. Intimidating was a good description. Anna had expected gentile, perhaps a bit shrewd or dowdy, but not this almost militant woman.

Great, Anna thought, Sherry sent me to a military boarding school. Though nothing online had indicated that, so perhaps Ms. Mandran was an exception. She hoped that was the case.

Anna left her bags for Wilson, who quickly took them and headed off, presumably to her room. Anna moved to follow the headmistress, who was quickly walking toward the towering old mansion before her. “Your Aunt mentioned that you were previously homeschooled. Our classes are quite advanced, so if you find yourself struggling to keep up talk to your teachers right away. They can recommend the appropriate tutors.”

Anna bristled at the implication she couldn’t keep up. “My father hired private tutors with impeccable references. You’ll find I have been more than adequately educated, despite being homeschooled.” Anna emphasized the headmistress’s terminology with disdain.

Ms. Mandran glanced at Anna, one eyebrow arched, contemplating her coolly. “We shall see.” She continued as if Anna had not interrupted. “Classes began in August. It’s unusual for us to bring in a student mid semester, but your Aunt insisted that you start immediately. Your situation certainly warranted bending the rules a little. As such, you will be somewhat behind the others, but only by a few weeks. Your roommate is an exemplary student and should be able to assist you should you need it.”

Anna stopped briefly as they entered the building, stunned by the immense grandeur of the interior. The outside had been that of a cold gothic mansion, but the interior was undoubted designed with the school in mind. The foyer was large and open, branching out into hallways. Anna wanted to look more, but realized Ms. Mandran had continued walking, and was already a ways ahead.

Anna quickly bounded to catch up, and followed her into a sleek office not far beyond a large reception desk just beyond the front doors. Ms. Mandran picked up a folder and keys from a desk and turned to exit the office again. She handed Anna the folder.

“You will find your class schedule inside, along with a list of school clubs and sports. We encourage students to be involved in extracurriculars. You’ll also find the holiday schedule, for when school is out of session; some students return home, but your Aunt has informed me that you’ll likely remain here due to her travels.”

They continued down numerous hallways, which Ms. Mandran droned on about, but Anna had stopped listening to process Ms. Mandran’s last bombshell about her future holidays. Not only would she not have her father this year, but she would spend her time away from everything that she had known.

They had proceeded up several of flights of stairs and down another hallway until finally, they stopped. Ms. Mandran unlocked the door before her, and handed the key ring to Anna.

“This is your room. You will have the right half of the room. Your things have been brought up already. The key ring has the key to your room, as well as one to the bottom drawer on your desk, incase you’d like to lock up any personal items. Stealing in not a problem at the academy, and I expect that to remain the case.” Ms. Mandran paused to assess that Anna understood this, and then continued. “Classes are currently in session, but they will end within the next hour. Dinner will be held at 6. Your roommate will assist you, as I have already spoken to her. Uniforms are not required after classes or on the weekend, but are expected otherwise. You can review the academy guidelines, they are in your folder as well.”

Ms. Mandran nodded. “If you require anything else, ask.” And with that she exited the room.

Peachy. Anna sighed heavily and dropped onto the unmade bed on the right side of the room. And there she remained, thinking about how very different her life had become in just three short weeks, until she heard the door to the room open.

Anna’s roommate, Lyla, turned out to be a very friendly petite girl who seemed to be brimming with energy. She had eagerly welcomed Anna, saying that it had been utterly boring not having a roommate. She had asked about Anna’s previous school and seemed truly shocked to learn that Anna had not attended any others. It had been an odd exchange.

‘You didn’t go to school with your other pack members?’ She had asked.

Lyla had seemed momentarily taken aback by her response, and then hastily corrected herself. ‘With your siblings?’

Anna had responded that she didn’t have any siblings, but she remained puzzled by the odd expression. She new that the east coast might have some differences in phrasing, but that had been exceptionally unusual.

They had continued to discuss themselves, their families, and even their impression of Headmistress Mandran, until it was time to head to dinner. As they headed down the hall, Lyla suddenly asked, “You said you are 16, but you’re a senior right?”

“Well I’m almost 17… Actually,” Anna pulled out her phone and looked at her phone, with everything that had been happening she’d completely disregarded that it was already September, “my birthday is tomorrow.”

“You forgot your own birthday?! But your 17th birthday is the most important.” Lyla exclaimed.

“I think you mean the 18th birthday.” Anna responded. “And honestly, with my dad and everything, I don’t think I even want to celebrate.”

Lyla looked like she stuffed a sock in her mouth, and then shook her head slightly while contemplating her response. “In my family 17 in the most important… We have a sort of… right of passage, I guess.”

“Oh, well, that’s cool. We didn’t have anything like that in our family.” But Anna thought she vaguely remembered her father saying something about her 17th birthday once… How odd.

Dinner passed quickly, and the food had been delicious. Pro-column, Anna had thought to herself as she and Lyla had returned to her room. Though that list was pretty short at this point, Anna thought. She had been lying in bed for hours now, unable to sleep in the unfamiliar room. She glanced at the clock beside her bed. 11:58pm. In 2 minutes she would be 17.

Happy Birthday to me, she thought bitterly. Orphaned, cast aside, and alone…

Suddenly pain lanced through Anna’s body, and she bolted upright in her bed with a cry of pain. But instead of relief, another wave of pain ripped through her and she scrambled out of bed, falling to the floor with another agonizing cry piercing the night.

“Anna?!” She heard Lyla’s voice somewhere beyond her.

“Help…” Anna whimpered as she felt her body ripping apart from within on the floor.

But Anna couldn't concentrate on the thought, as another scream torn through her as her body transformed, bone and muscle reconfiguring themselves into something else. And then, as the pain subsided, she realized she wasn’t screaming, she was howling...

Anna looked down to see that her hands were now paws, covered in pure snowy white fur.

Anna looked up quizzically at Lyla, who was smiling.

I am a fiction writer. I have used Deviant Art as a platform in the past, but I wanted to try something new. I primarily write fantasy, but I don't like to limit myself. I can't wait to see where this leads me.

More stories from Jessica Jolliffe and writers in Fiction and other communities.