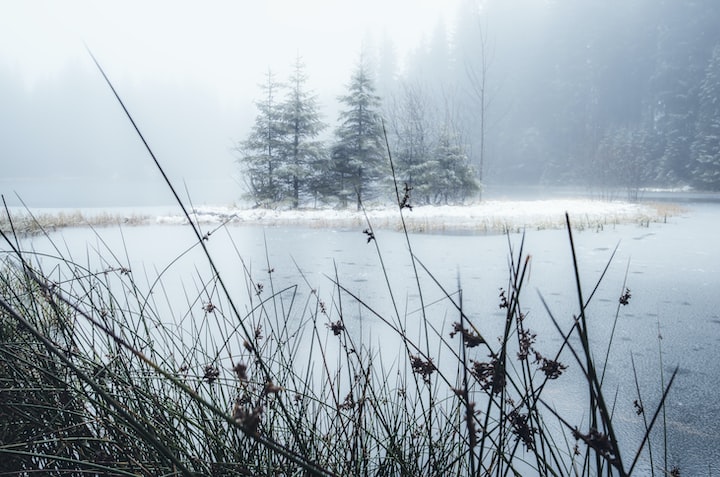 Photo by Peter Oslanec on Unsplash

We watched either other warily. Its brown golden pools of eyes unreadable and closed to me. The snow came in steady softness falling in fathomless quiet.

I swept the snow from a bale of hay and found it dry. Good fortune, I thought. I thought of the wreckage I had just left and slowly wiped my face of the snow crystals clinging to it.

Coming down the mountain, I had met a semi trailer, in my attempt to avoid this collision, I slammed the brakes, fishtailed, and had to exit the car to avoid an icy plunge to my death.

The driver of the semi continued without even an eyelash bat, barely slowed. Of course, that wouldn’t have been much good for anyone anyway.

I was living my deepest dreams, here in this ice bound state. Seclusion, nature, and independence were my best friends. Even the hardships were something I embraced for the quiet and solitude.

However, this was a little much. I lost my car, and nearly my life.

So here I was in a barn, in a blizzard, with a horse. My iPhone was in the car and it was snowing so hard, that visibility was zero.

My plan was to stay here until whoever came to care for the animal, showed.

The door opened shortly before I thought I would freeze to death.

I stood and thought to explain myself, before I could say a word, the thoughts died on my tongue.

A warmth enamanated from him, and a glow. As thoughts became transmuted rather than heard I knew that I’d met him before. Or rather,I felt like he was a stranger I had always known.

I looked into eyes unfamiliar to me and saw love, inexplicable. Communication and unfamiliar wars with my singular physche pushed against each other in an orbit of doubt, distrust, and a want to accept the inclusion of being loved.

As strange as it was, this recognition of love, was tangible and certain.

My soul immediately centered around him and never wanted to leave. I recovered my breath and watched as he poured hot water into the frozen trough, spoke to the horse and watched me. I didn’t speak, nor did he.

Gravity is lost and I am found inside of him.

Nothing inside of me can escape the warmth of his embrace.

I was a teenager, the last time, I had thought anything similar to this. A soul, love, bliss, intimate moments of entertained grace lost in moments of connection.

I spent a lifetime alone, pretending. Making things work was okay, so that space was filled and a sense of belonging was met.

I knew I could never recover.

Tears, fell, and ran meaningless and meandering paths down my face.

He picked me up and carried me home.

The snow fell around me, unaffectedly. My nature to nurture was circumferenced by his.

I wandered whatever happened to nursery rhymes, bedtime stories, and women that cried at soap operas and lifetime originals.

He held me tighter.

The night fell quickly, as his feet made sparkling crunch sounds softened by the new cover.

I felt like nothing existed before now, any lover I had ever longed for, cried for, or worked to have, had never mattered.

The night was surreal. The emotions were genuine, and the capacity for human connection unequivocally restored.

We never spoke. We couldn’t. There was no time for such. The timeless melding of soul and body, body and soul in effortless answers,softened the harshness of cold and time into muted echoes of affection and sexual redemption.

I fell asleep inside of him. As his soul and aura held me as strongly as his heated flesh, I wanted more but exhaustion carried me into comforted sleep.

In the morning, it had stopped snowing. I awoke with the normal feelings, after sex, of do I play it cool? Do I need to leave, my untouchable status followed me everywhere. And this man seemed like all of the moments I had felt sincerity of connection and love in one. Yet the heat was always dead by morning or after a few weeks or months, no matter how hot it burned.

They always cheated, catered, simpered or otherwise buried me under the importance of another, or status, or whatever.

So I put on my game face, and then, he was the same person that he was the night before.

We had breakfast, we went skating on the lake behind his house and fell laughing into a soon more serious embrace.

Tommorow is for adjusting my life of loneliness into one that fits him, for me.

So in this situational moment of duress I had found the deepest most genuine love I had ever known, an unquestionable depth that beckoned me to believe again in all things, in magic, in faith, and hope, and life.