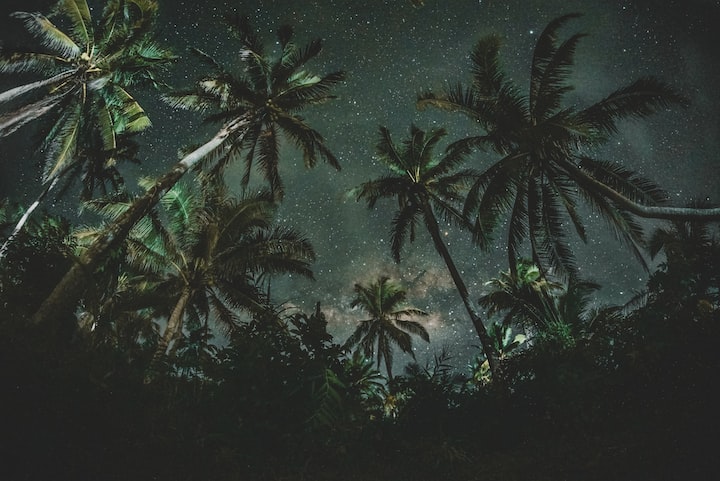 There are many reasons why one goes on a tropical island. The sights, the beautiful scenery, and most of all, to get away from it all, if only temporarily. All three reasons apply to Michelle Connors, who was at a night club sipping on a mai tai, and looking a tad frantic for someone who was, for all intents and purposes, in paradise. The young woman was constantly looking over her shoulder, giving the appearance that she was hiding from someone...or something. At that moment, Michelle hears the following from right behind her:

A shocked Michelle turns around and sees a brunette woman leaning on the counter, giving a come-hither stare towards Michelle, as well as a bit of a confident smirk. Michelle seemed to be drawn to the woman, almost hypnotically, but she was brought out of it within an instant. "Excuse me?" the brunette asked. "I was asking if you needed a refill." Michelle simply nods, prompting the woman to order a pair of mai tais. As they await their drinks, the brunette turns her full attention back to Michelle.

"So, what brings you to this island?"

Michelle couldn't bring herself to speak; she had been keeping to herself on this island in the three days that passed since her arrival, and this was the first time she had come in verbal contact with anyone, native or tourist. The woman simply found Michelle's introverted nature humorous, and actually started laughing, and in response, Michelle simply blurted out the following statement:

"A vampire is after me!"

Michelle quickly covered her mouth afterwards, because she knew how her statement sounded. She expected to be laughed at even more so by the brunette, but to Michelle's shock, she was on the receiving of a consoling hug from the woman. "Oh my God," she said. "You poor thing."

"I knew there was something going on." the woman said. "I know distress when I see it. And I see a lot of it in my profession: I'm a cop." The woman showed her badge to Michelle, who looked in awe and began to feel a sense of confidence, as she was not only believed, she was believed by an actual cop.

"Thank you so, so much...I didn't get your name," said Michelle.

Two hours passed, and Michelle leaves the club with a feeling she hadn't had in a long time: confidence. She was beaming and smiling as she made the walk to her hotel room; going on foot because she had one too many mai tais. Michelle was so tipsy that she didn't even flinch when she saw a man watching her close by. Instantly, she believed it was the booze and brushed it off. However, when that same man drew closer and closer, Michelle's vision became a bit clearer and she managed to get a good look of the mysterious man: long hair, trenchcoat, quite inhuman looking. Michelle started walking faster and faster out of fear, and believed she was far away, only to see her pursuer right in front of her.

Michelle screamed as loud as she could as she ran the rest of the way to her hotel room, as the vampire pursuer who had been obsessing over her--the very being she was getting away from, was somehow on the island after her. She managed to make it to her room and lock the door, but just as she was about to take out her cellphone and actually dial for help, she hears a loud knock at her door. Michelle's apprehension remained, but a familiar voice appeased her.

The voice Michelle heard belonged to Leona, and it was enough for Michelle to open her door and let Leona in, but at that instant, Leona was attacked by that same mysterious man. "Leona!" Michelle shouted helplessly, as the brawl continued. Her priorities changed; she once feared for her life, now it was Leona's she was afraid for. Michelle's fears increased when she heard a loud bang, but she was appeased again, as that same familiar voice called her.

Michelle opened her door and hugged Leona before letting her in and seeing the man's body. A single gunshot killed him, as Leona had kept her gun with her just in case she needed it. "He's not a vampire?" asked Michelle.

"What do you mean?" asked Michelle, as Leona closed the door and gave her same smirk, while her back was turned to Michelle. "Just tell me, Michelle," said Leona.

"Tell you what?" asked Michelle.

"How did you know?" asked Leona. "What gave me away?" At that very moment, Leona faced Michelle, but this time, her smirk had become a very sinister smile. Her complexion was less human, and the centerpiece of Leona's smile was a pair of long fangs.

"It was the way you looked at me," replied Michelle. "When I was stalked, when I was pursued for all that time, I ended up developing some sort of weird vibe...a connection. I ran to this island out of fear, but that same feeling came back when we our eyes locked for the first time." Leona chuckled in response, a slight evil laugh that carried a mix of amazement over Michelle putting two and two together, but also a bit of sadism, as she enjoyed hearing Michelle voice her fear of the vampiress.

"I've been watching you for so long, dear girl," Leona said as she walked closer to Michelle, "and as you know, I'm a woman who goes after what she wants. Nothing and no one can stop me; not even a pathetic vampire hunter. But of course, you knew that about that man, too, didn't you?" When Leona locked eyes with Michelle, she asked the following question:

"Now that you know the truth, do you still fear me?"

"I do," replied Michelle, "but not as much as I used to. I want you just as much as you want me. I want to be your bride." Leona stroked Michelle's hair and kissed her lips passionately, before moving on to Michelle's neck. The vampiress kissed the nape of Michelle's neck, and then moved on to her right side, before inserting her fangs inside. Michelle's expression was nothing but pure enjoyment, as her humanity was slipping away bit by bit. Once Leona was done, she licked her fang-filled lips, and as for Michelle, she was no longer the shy and introverted young woman. She was now a creature of darkness, and she laughed in wicked glee.

"Thank you so much, Leona," Michelle said before kissing her vampire bride. "You've made me so happy."

"Of course, my dear," said Leona. Michelle arrived at the island running from her fears, while Leona was looking to get what she had been after for so long. Both women are now bound to each other for all eternity, and their happiness is every bit as immense as the time they have with each other.

Thank you for reading this story all the way through! If you liked this story, click the heart and the "subscribe" button; and feel free to comment below! Tips and pledges would be immensely appreciated, as they help support my writing, but no pressure!

Born on March 18, 1985. I am an avid fan of sports and wrestling, and I've been a fan of female villains since the age of eight. Also love movies--especially comedy and horror--and among my favorite TV shows are The Simpsons and Family Guy

More stories from Clyde E. Dawkins and writers in Fiction and other communities.