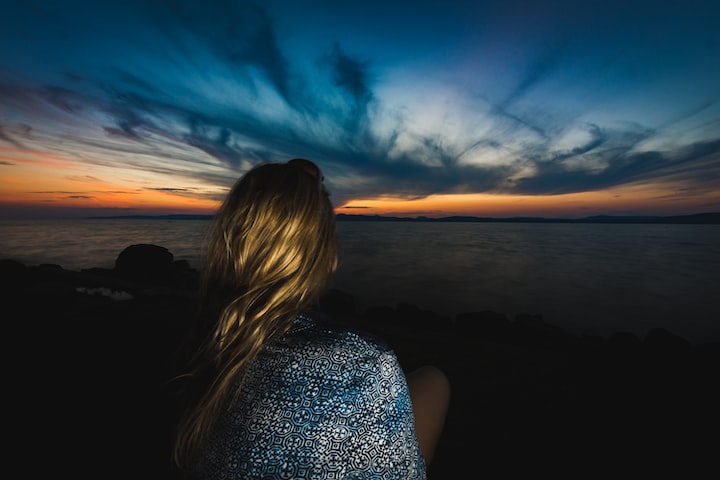 Photo by Viktor Vasicsek on Unsplash

Rona could hear the laser cutter going in the garage.

Piles of laser-cut Christmas ornaments would be ready soon. A few big orders had come through. The well-stocked beer fridge would keep Mike going until midnight, at least.

Quietly closing the living room door behind her, Rona went out to the porch. The warm sea breeze laden with the odour of rotting kelp rushed to greet her. She closed her eyes, breathing it in deeply. The waves, her old friends, lapped reassuringly at a distance.

“I must go down to the seas again, to the lonely sea and the sky,” Rona whispered almost inaudibly to herself.

The cobalt blue summer sky speckled with flakes of unruly vermillion stretched out unhindered. Even an hour after sunset, dusk held its own to the night sky.

Their little house sat right on the edge of the beach, in a quiet corner of the sleepy little town.

“Don’t know how she can love such loneliness!” Mike would tell his friends at the local pub. It’s getting harder to get her out of the house these days.”

She was out now, wasn't she?

The sand was still warm underfoot as Rona made her way to the small beach hidden from public view. The tide had gone out, leaving little puddles of water in the rock pools. Sealife was abundant in these pools. The pāua, pipi and cockles hung around in clusters, as did the hermit crabs.

The dinghy lay tilted to its side, as always.

Rona leant back against the warm wood that had soaked up the heat of the summer sun. She stretched her legs out, digging her heels into the white sand, and looked out at the placid sea.

A sea she had spent a large part of her life exploring with her dad.

An avid angler, Rona’s father, wanted her to learn to fish as soon as she could hold a fishing rod.

“Don’t get her addicted like you are Norman!” Rona’s mum reminded him now and again. “She should focus on her studies and learn to keep a house.”

But for Rona, fishing was more than just a skill or a sport. It was a lifeline to her dad, her friend, and her hero.

She couldn’t fit in with the other girls at school and be part of their ‘boy talk.’ Her classmates wanted to leave their insignificant little seaside town and head to the big city after school. To look for love and success.

Rona loved where she lived, undisturbed by the clamour of modern life, cocooned by the sea on one side and the hills on the other.

“Patience is a fisherman’s biggest tool,” Rona’s dad would tell her as they sat waiting for the snapper to bite. The wait wasn’t without its thrills. They would spot dolphins and orcas in the distance sometimes.

Rona learnt how to follow the mussel boats to get the best snapper. They would pull up only metres from the mussel barge. The mussel boats pumped out a constant stream of berley into the water, the brown bait turning the surrounding sea murky and beige.

The free berley supplied by the mussel boats brought the snapper out from their hiding places and much closer to the surface than normal.

“Lay your bait just under the surface of the water, they will bite.”

Rona recalled vividly the day she caught her first snapper at the age of seven. It was a medium-sized one that fought and wriggled around gasping for breath on the floor of the boat. Rona’s excitement soon changed to tears.

“Throw it back, daddy, she begged.”

Norman shook his head in disbelief and released the fish back.

Rona didn’t stop going out fishing with her dad. She just looked away every time they caught a fish until it was secure in the bucket.

Mike didn’t get this when she told him the story.

“A bit hypocritical, don’t you think? I mean, it’s not like you are a vegetarian.”

A distant hoot from a cargo ship brought Rona back to the present.

She ran her fingers over the faded letters that spelt out the name of her dad’s little dinghy.

Her dad was not a very well-read man. But there were a few favourite poems that he had memorised. The Sea Fever by John Masefield was one he would often recite when out fishing with Rona.

A poem that was etched in Rona’s memory forever, too.

‘And all I ask is a merry yarn from a laughing fellow-rover,

And quiet sleep and a sweet dream when the long trick’s over.'

The heart attack came without any warning.

They had had a day-long fishing trip planned for that week. Norman and Rona had been looking forward to the trip for months.

“Keep the dinghy, your dad would want you to,” said Rona’s mum after the funeral.

That was two years ago.

Rona had never taken Sea Fever out by herself. But, she spent many evenings and often late nights sitting, leaning on the little skiff, reminiscing.

“You should at least try to socialise a bit more, Rona. this is not normal!” Mike complained these days.

Maybe it was time to 'socialise' again. The only way that suited Rona. With the only friend she had anymore.

The moonless night sky was littered with stars. Rona spotted the Southern Pleiades and smiled. Her ancestors knew to navigate the oceans using the stars.

As the oars disturbed the sea, the bioluminescent plankton danced around the edges of the Sea Fever and the oars, casting a magical glow on Rona’s smiling face.

She nestled the oars on the floor of the Sea Fever.

The dinghy knew where to take her.

More stories from Rhea Dyuti and writers in Fiction and other communities.