by Catherine Guillotte 2 months ago in Fantasy
Report Story 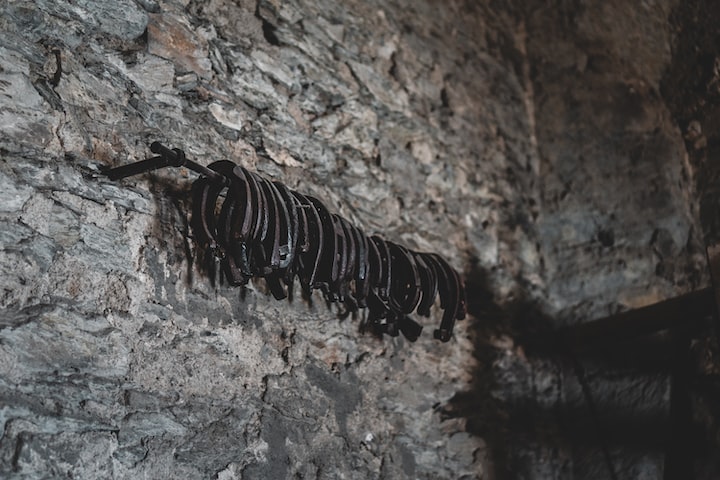 There weren’t always dragons in the valley. That was what my father always said when he would tell his grand tales by the fire. Listeners of all ages would be captivated by his breath-taking descriptions of magical creatures and heroic adventures of his youth. That was until one day, the Warriors of Sandoval came to take my father away for daring to tell his stories. His stories were considered a crime against The Crown, showing King Percy of Sandoval in a less than appealing light. The King wished to be the greatest- and most feared- power in the lands, and having old adventures spread their tales of heroism when the Warriors of Sandoval sat idly by was not acceptable. Fearing the next generation might try to follow in the heroes of old’s footsteps, The King had my father, and many others, imprisoned. My father knew that day would come, for his truths, or his blood as he was a pure blood elf. His transgressions against the King, and his elven blood, became my burden to bear. For the next ten years, I lived in the orphanage in town. Now though upon my 18th birthday, I, Sapphire Warwick, was finally free, and I was going to find my father.

The night was cold and muggy as I walked down the street from the orphanage. If I was to make it to Sandoval, I would need a horse. Unfortunately, I was going to have to steal one. Patrols of Sandoval’s finest were becoming more frequent, so I was going to have to be careful, and pray that luck was on my side. My father’s cursed blood provided some aid though as my senses were better than most humans, especially my hearing.

Spotting the stable ahead, I ducked down a back alley and crouched. The patrol of Warriors walked by without so much as a glance in my direction. I remained where I was until their footsteps faded into the night. Making my way to the edge of the alley, I glanced around once, before darting into the stable.

The stalls were filled with a variety of nags, but one already saddled beast caught my attention. The black stallion was a sleek and muscular brute with long legs perfect for making the journey to Sandoval. The only issue was, this horse appeared to have on the tack and regalia of a Warrior of Sandoval. That might pose an issue if I was caught outside the city.

Shrugging, I decided I had no other choice. It was either this perfect creature of stamina and power, or a pathetic nag who wouldn’t make the journey.

The stallion’s dark gaze watched me warily as I approached. “Easy, it’s alright,” I cooed softly, reaching up to grab the beast’s bridle. His ears flicked back as the stallion lifted his head. “Relax, we’re just going out for a ride,” I assured the animal. “It’s alright, you can trust me.” Lifting my free hand, I placed my hand upon the beast’s cheek. The black stallion stamped his hoof as he took a deep breath, only to relax. Clearly catching my scent, I focused on staying calm, letting the beast pull that calmness from me. Being a half-elf had its advantages, especially with animals.

Opening the stall door, I led the black destrier out into the night. Giving my home town one last look, I grabbed hold of the saddle and swung myself up onto the beast’s wide, muscular back.

The war horse didn’t require much convincing, his dark hooves kicking up dust as the stallion galloped out of town. Soon, my home town disappeared on the horizon as the night stretched as far as I could see.

Out in the wilds, the night was silent and peaceful, unlike the chaotic orphanage I was finally free of. I never knew the night, or the silence, could be so relaxing.

Closing my eyes for a moment, I enjoyed the small pleasure this midnight ride allowed. The feel of the strong beast beneath me, the wind through my hair and the rhythmic flapping of wings.

My eyes opened quickly as the sound registered in my ears. What was that?

Looking up to the night sky, I could only gasp as I caught sight of a Pegasus. The moonlight shined upon the magnificent creature, illuminating its crimson hide and matching wings.

“Like the tales of old,” I breathed softly, not believing this creature was real. Pegasus were thought to be extinct for more than a 100 years after being hunted by royalty and warrior alike for the ‘perfect’ mount.

Extending out its wings, the Pegasus glided effortlessly through the night sky. My attention was caught, fixated upon the beast as its flight carried it closer and closer.

Suddenly, the mythical equine dove, plummeting straight towards me.

Shouting, I pulled on the reins to lead the war horse away from the oncoming beast. The stallion obeyed, turning sharply only to squeal in surprise as I was knocked from his back.

I hit the ground hard, the wind knocked out of my lungs as I felt a great weight on my chest. What was… happening.

Thoughts were hard to finish as I stared up dazed a hooded figure crouched over me.

“Hmm….” The voice was low and resonating, almost musical and sweet, “You’re not a Warrior. Why do you ride a Warrior’s steed?”

I had to shake my head to clear my fixation with my hooded assailant’s compelling voice.

“What concern is it of yours?” I asked, hoping my voice didn’t betray me. It was a struggle already to breathe.

The mysterious strange merely laughed, but something about him seemed almost… familiar. My eyes widened as he reached up, pulling his hood down to reveal his face. The sharp features, bright eyes and long, pointed ears gave it away. He was an elf! Pure blood. Like my father.

“What’s your name, halfbreed?” the elven stranger asked, before he finally got off of me.

“Sapphire Warwick.” I replied, before daring to sit up, “And yours?”

“You can call me Tobias.” Tobias held out his hand, and I gratefully accepted it as he helped me up. “What are you doing out here in the middle of the night? This is a dangerous time for our kind… especially stealing a Warrior’s horse.”

I could only shrug, debating how much information to give him. He seemed nice enough and he was an elf. He may very well be the only person I could trust.

“Well, it’s easier to travel at night.” I explained at last, but judging by the unimpressed expression on Tobias’ face, I got the idea he disagreed. Sighing, I looked away from him a moment, before shaking my head. “Look, I need to get to the city.” With that, I began to explain to Tobias my current plight and my plan to find and rescue my father. I had no proof he could be trusted, but something about him made me feel… safe. Perhaps it was because I had finally found someone like me in this cold and cruel world.

Tobias listened intently, before giving a prompt nod as I finished, “Tell you what, my little gem.” I couldn’t help the glare at the ‘gem’ comment. How original. “Come with me. I won’t lie, I am a capitol rebel against The King and his mighty Warriors of Sandoval,” Tobias smiled a moment, “But I think you’ll need my help if you plan on committing treason and breaking your father out.”

My eyebrow rose at the unexpected offer for help. Was he being serious? Noticing my hesitation, Tobias’ smile only broadened.

“Don’t worry. You can trust me. There’s not many of us left, so need to stick together… especially if we plan to bring all of our kind to freedom.”

“All of our kind?” I repeated, but I didn’t get a response as Tobias turned and whistled. I wasn’t sure if he could be trusted, but this journey would be easier with a companion. Especially one with a flying horse, I thought as the crimson equine swooped down and landed beside us.

Tobias hopped onto his steed effortlessly, settling on her back just behind the base of her wings. Looking over to me, Tobias smiled again before he leaned down and extended his hand out to me. “You coming, little gem?”

I hesitated, looking from Tobias and his magnificent mount, then out to the cold night. Sandoval lied ahead, but without the stolen steed, I had no real transport. Shrugging, I figured I didn’t have much choice.

Accepting Tobias’ hand, he pulled me up onto his mount. The beast turned, flapping her wings a few times, before she began to gallop. As the Pegasus ascended into the sky, I leaned forward, gripping tightly onto my new elven companion.

This was going to be interesting, but hopefully, this partnership was true. I could only hope that one day soon, I would find my father and help spread the truth, and freedom, to my people.