Rise of the Meek

by Brian Gracey 4 months ago in Fable

When the rulers are taken, what remains... 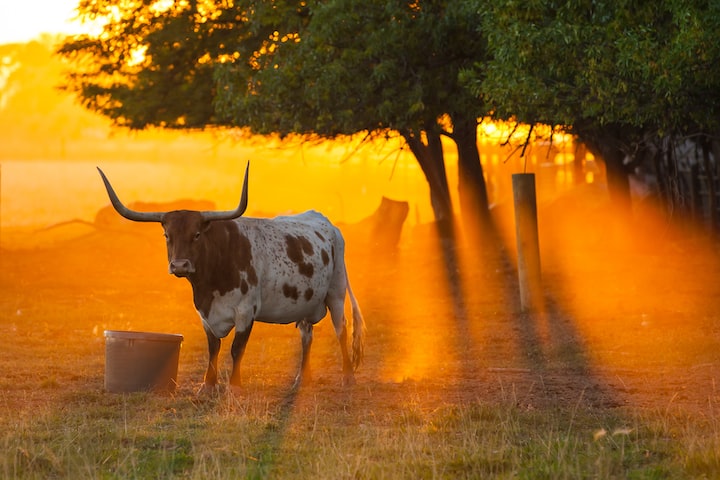 The bull was unhappy. The grass was drying up and all of his mates were taken away from him. The pools and puddles that had once sustained him were empty, the air was hot and heavy and the sky shone with glaring discomfort and not a single shade bearing cloud to shield him. The trees were denuded, and their skeletal branches provided no relief. He circled his range, his hooves kicking up dust along a track well worn. He was alone. And yet he abided.

His captors had not come for several days, not with food, not to coerce him into their wooden cave, not to take more of his mates. They always came from the east, over the hill and beyond the red wooden cave, but not since the cloudless thunder and flameless smoke of a few days ago. He had stood at the edge of his range, almost bruising against the biting leafless hedges, looking for them. Yet they had not come.

It had been a moon since his last mate had been taken. He mourned her as he mourned them all, but even then his captors continued to bring hay and fill his water trough. It had been days since even that had occurred. Thankfully the bull was still strong, but he began to wonder for how long. His life with his captors had not been hard and he had certainly been provided for, but he knew that without food and water he would not last for long.

And so he made a decision. The bull spent the day looking for a section of hedge that looked brownish and drooping, weaker than the rest around the range, and snorting with finality, he lowered his head and rushed at the barrier as quickly as he could. He was unsurprised as he crashed through the hedge, and barely felt the few nicks from the metallic thorns as he continued to run into the night.

Thus began his journey. The bull walked for miles, veering only to avoid some edifice that he could not mount, at first boulders or crags, and later strange masses of stone and wood, metal and other things he could not identify. Pleasantly he found pools of water here and there, some brackish, some tainted, but enough clean enough that he was sated. In nooks and corners, cracks and gullies he found still living grasses and green, enough that he was fed.

Satisfied that he could maintain his strength and health through foraging, the bull began to focus more upon his surroundings. First he noticed that there were other creatures that were doing as he was, doing their best to survive. The flying creatures, always there, always loud and bright and moving. His captors had hunted them, and eaten them, and sometimes even caged them, but there were so many, many more than his herd had ever held, and their numbers made them hard to contain. Sometimes they would eat from his finds and drink from his pools, but for all their multitudes they were small, and no threat to him.

There were also his fellow captives, or their remnants. The small, stout squealers trundled too and fro, obviously having escaped from their cages much as he had. From his experience they were less picky about their food and so there would not be much competition for him, and a few had even led him, intentionally or not, to sources of water in strange, perfectly circular tunnels of poured stone.

His squat horned cousins, still head butting their way to dominance amongst one another, leapt and climbed over everything, from the great metal steeds of our captors, now abandoned and browning where they were left, to the stone and wood crags left by their makers fallen and falling without their stewardship.

Running here and there, always running, were the tall, lanky mount beasts, some yet saddled, with no captors to ride them. The bull recognized them as a competitor for resources, but it appeared that away from his range, out in the world, there was enough to go around. His statuesque cousins were free to run so long as they respected what was his.

Then there were the broken hunters, the small furry pack animals, once majestic, now as varied as their masters. They were building packs again, and gaining courage in their numbers and desperation. They might be a problem, and so when encountering them the bull would snort and stand and rush to run them off, to teach them fear. He hoped it was enough.

Finally, giving the bull hope, there was the scent of possible mates on the wind. He would find them and liberate them if need be so that they may grow their herd. So that they may continue in this new world without those that once held them, and took them.

Nowhere that he wandered though were there any signs of his captors. It was like they had just disappeared, or perhaps had been taken by something stronger, as that is the way of the world. As of now it appeared that the bull was the largest, the strongest, and the most worthy creature that remained. As he climbed and crested a crumbled pile of stone and metal and wood he looked down upon the remnants of what was once the world of his captors and he took ownership.

As the sun rose behind him, the glowing orb framed by his horns as he surveyed the land before him, the bull saw plenty, he saw greens for food and water aplenty. He saw others that caused him no concern, and while he would not require their worship he would enforce their respect, and as he noticed silver disks shooting across the sky and flying up beyond the clouds, Apis the bull looked down upon his kingdom and was content. The bull abided.

Receive stories by Brian Gracey in your feed
Brian Gracey
Read next: Flashthunder