by Heather Cumbo 9 months ago in Short Story
Report Story 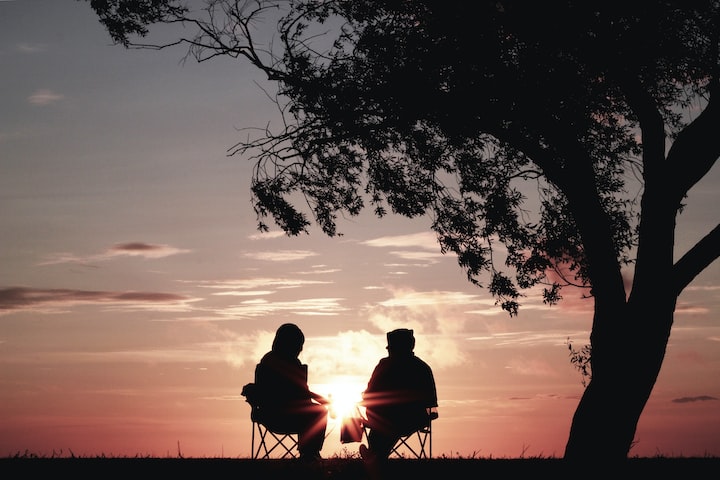 Photo by Harli Marten on Unsplash

The farmer pulled the pickup truck into the lane that led to the house and glanced at his wife in the passenger seat. She stared out the window, deep in thought. Her brows puckered suddenly as if something had caused her anguish. She gave a shuddering sigh and a tear curved the roundness of her cheekbones.

He was at a loss what to do. He had just picked her up from the hospital where she had spent a week and a half in the psychiatric unit. It wasn't the first time she was hospitalized for mental illness. He knew that she had been in the hospital before they were married. He knew that she had battled depression and other illnesses ever since childhood. When he proposed to her, he knew that he was binding himself to a person who would have her struggles. He wanted to be her partner and helpmate through those struggles. Heck, what he wanted was to make her so happy that she wouldn't deal with those struggles in the first place. Yet, here they were; she spent a week and a half in an institutionalized ward, away from his home and out of his bed because she had tried to commit suicide twice in the past month.

He would never, ever tell her, but he felt a little ashamed. His family, mercifully, was quiet as well. But he could tell behind their embarrassed hugs and their polite offers of help were the unspoken acknowledgements that he could have done better for a wife. It was bad enough that he married a city girl who knew nothing about farm life. It made it ten times worse that she was mentally ill, meaning she would sometimes let the house get cluttered and messy. There were even days when she would sleep on the couch all day, leaving the housework undone and forcing her husband to come in from a day's work to fix dinner.

He parked the truck. Without looking at him, she got out and walked toward the house with her hands in her jeans pockets. Her shoulders were hunched up almost to her ears. He hated that she walked like that. He wished she would just walk tall for once. She was getting a dowager's hump already because of her awful habit.

"Where are you going?" he hollered at her.

He reached into the truck bed and pulled out four five-gallon buckets. She still didn't say anything as she walked to him and took two of the buckets.

They trudged in silence to the tiny cluster of pear trees that they called their orchard. He wanted to hold her hand. He wanted her to enjoy the blue skies. He wanted her to be healthy and hearty enough to can the pears and make pear-bourbon pies and enjoy doing it.

They came to the first tree.

"Look how pretty these pears are," he said as he plucked one from a branch. He bit into it. "I think I like pears more than I like apples." He didn't know why he said that. Was he trying to hurt her? She loved apples, always insisting on having some in the house. "Here, you try one."

He plucked another pear and handed it to her. She wrinkled her nose. She finally spoke.

"I don't know how you can eat things raw right off the tree like that," she said. "It has bug poop on it." That was one of her annoying city traits. She didn't trust anything that didn't come from the store.

As if she could read his thoughts, she leaned into him. She slipped her hand into his back pocket and squeezed his butt.

"I want you to know," she said, "that it has nothing to do with you. I love you with all my heart and you make me happy. You're much better to me than I deserve. These thoughts I have just won't go away, though. I truly feel like I'm fighting the devil. I want to be better, Baby. I really do. I just don't know if I ever will be."

She reached up to pick a pear. He stopped her hand.

He wrapped her in his arms.

More stories from Heather Cumbo and writers in Fiction and other communities.