by Emma Rushlow 4 months ago in Adventure

How One Encounter Changed My Perspective 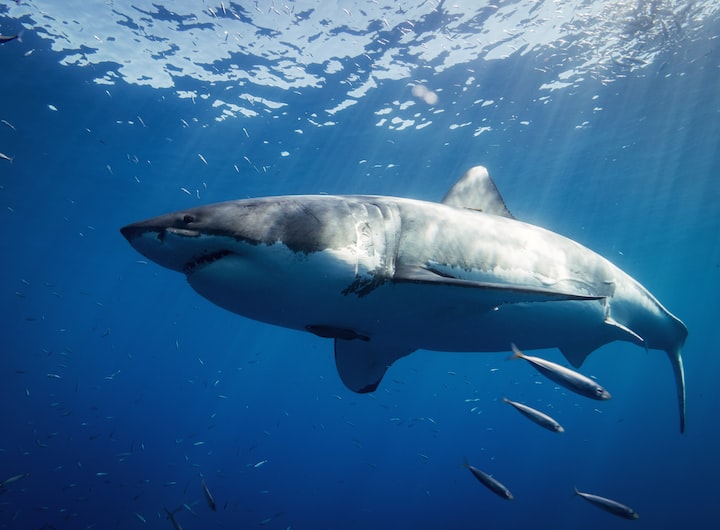 Photo by Gerald Schömbs on Unsplash

“I can’t believe you’re making me do this,” I held my nauseous stomach with one hand, while steadying myself with the other on the edge of the boat, hoping it would help me feel better. It didn’t.

“Hey, you signed up for this too. I didn't make you do anything.” My fiance Jack smirked at me from the other side of the boat, his thick Australian accent barely came over the sound of the wind as we rode against the blue waves of the Atlantic. He shook his curly blonde hair in the sun as sea spray pelted him in the eye. I laughed so hard I nearly lost my balance, but it was a good distraction from my seasickness for a second.

“Remind me why I signed up for this then?” He wiped his blue eyes with a towel before walking over and settling in beside me, his wet arm wrapped around my shoulder.

“Because I want to show you what I see, and maybe,” he smiled with a chuckle. “Just maybe, you’ll see the ocean like I do.” He beamed with excitement at what we were about to do, though I was yet to share in his enthusiasm.

My fiance Jack, had been obsessed with sea life since he was 5. Everything in his world revolved around the ocean. He had spent his years growing up in Australia, surfing and scuba diving, learning as much as he could. And now, he was a marine biologist and got to pretty much live his dream life every day. I, on the other hand, was a California girl who was crazy about horses. And not seahorses either, like real land horses. I grew up on my Grandpa’s horse farm and grew up riding and exploring the world through my equine colored glasses. And you’d think that if you put two huge animal lovers together in a room, they would have so much in common, right? Well, Jack loved all ocean life, and had a deeper connection with sharks. I didn’t like sharks. Like, at all. They scared the crap out of me by just watching them hunt on Animal Planet, though it was probably movies like Jaws and 47 Meters down that really motivated me to hate them. But I knew that despite my fear of being attacked or eaten alive by one of these prehistoric creatures of the deep, my soon to be husband wanted to share his experience of their so-called “majesticity” with me. And as the amazing and incredible wife I wanted to be, I said “sure.”

Well here we were, heading out from the safety of Guadalupe Island, a couple miles south where we would be shoved in a cage and forced downward into the Atlantic, and yeah you guessed it, surrounded by Great White sharks. My nerves heightened with each bounce of the waves, my hand clenching Jack’s so hard I heard him grunt uncomfortably. Our swimsuits were skin tight, which didn’t leave me a lot of room for any deep breathing exercises. The driver only spoke a little english, but Jack knew some french and was able to communicate with him.

“Nous y sommes presque.” The driver stood and leaned above the wheel. Jack nodded his head in understanding.

“Merci.” I I felt left out of their short conversations as I only knew spanish. My french class in high school I had, well, failed it. Jack leaned over and whispered in my ear, sending chills down my skin.

“He said we’re almost there.” I faked a smile.

“Yay,” I laughed with nervous energy as he held my hand tighter, lifting his head to the wind as he closed his eyes. Why did he always look so heroic and attractive on a boat? I looked green, pale and-

“Pfttt,” My salt covered hair slammed into my eyes as a gust of wind met the boat. I pulled it out of my face and tied it securely in a braid behind me. Before I knew it, the boat was slowing down and Jack was standing to help our guide, Albert, undo the giant cage that nestled quietly on the back of the boat. I took this time to panic. I was a land girl, I loved feeling the dirt beneath my toes and seeing tree’s surround me and mountains towering into the sky. But out here, all I could see in every direction I turned was a calm and quiet ocean. Barely a sound was heard, except a lonely seagull who had followed us from the island. A loud splash startled me and as I turned, I saw the metal cage gently floating at the surface of the water.

Jack motioned for me to come beneath the shade of the ship’s roof, and began explaining to me how to use the oxygen tank. I tried to remember every detail, my anxiety definitely didn’t help. Fifteen minutes later, Jack and Albert had walked me through the steps to get into the cage, to not get eaten and what to do if a shark head came through the bars and tried to take my head off. Okay, well, the last two I made up in my mind, but it was still hard to try and put aside the scenes from movies and shows I had seen. Those were made in Hollywood, I told myself. They aren't real. We walked to the edge of the boat and Jack stepped down onto the next level before looking at me.

“You’re gonna be okay, alright?” I knew that he loved me like crazy to want to share this experience with me. And I guess I was crazy enough to let him.

“I’m alright. I’m ready,” His lips creased upward into a smile as he took my hand and guided me down. The water lapped up onto my shins. I couldn’t feel the temperature because of the suit, but I felt the power of the waves. It was strong. As if it were warning me to stay away. I breathed in deeply as Jack stepped inside the cage and he disappeared under the surface of the water. A few seconds later, he came up and waved me to follow. I made sure my mask was in place. It was. Here we go. I plummeted down and splashed into the cold water, seeing only little white bubbles before everything settled and I saw Jack beside me. The ceiling above us closed with a loud thud, and for the first time in my life, I stared down at the ocean below me. It was dark. Sun reflected from the surface in streams of white light that slowly moved throughout the water. It was as if I were in another world as I stared around me. It was quiet, the only sound was our oxygen tanks as bubbles made their way to the surface. Jack gave me a thumbs up and I could tell he was excited. I was feeling better, but still nervous and then-

My body froze. My mind stalled. A grey figure maneuvered its way into our view. Her teeth were the first detail I noticed, shiny and white as they narrowed their way down her closed mouth. We both swam as still as possible as she swam by us, her giant presence causing us to surrender into an amazed silence. As she drifted past, another shark came, this time from the other direction. I felt its large, black eyes on us as if wondering what species of creature we were, but I wasn’t scared this time. This wasn’t the evil and violent shark I had known on screen or from detailed stories of dangerous encounters. He wasn’t trying to attack us. This was simply his home, and he was exploring his territory like he should. I felt my eyes blur with tears as his tail swayed gently behind him before he disappeared into the dark, as anonymously as he had appeared. I looked over at Jack and shook my head in wonder. He must’ve known what I was thinking because he nodded his head in agreement. I stared back into the deep water as another majestic Great White passed by. I wasn’t afraid. I wasn’t afraid.

Albert grabbed my hand as he pulled me up from the cage, my suit shoes squeaked as they squished and squashed their way to the long seating area. But I didn’t hear it, all I could think about was my brain redefining sharks to me. Redefining everything I had ever thought they were. We had spent 30 minutes in the cage, and within that time, my perspective on sharks had completely changed. I took off my mask and my tank as Jack stepped up, laughing with pure joy as he walked over to me quickly. Wrapping me in his arms, I heard his breathing settle before he pulled away and held my shoulders so he could look me in the eyes.

“What did you think?” I beamed with wonder.

“Jack, I’ve.. I…” I didn’t even know what to say. “I’ve never seen a shark that way. They were beautiful.” He pulled me in and kissed me. I felt the strong taste of salt water on his lips but I didn’t care. I loved him and now I knew why he loved the ocean as much as he did.

“They’re pretty incredible, aren't they?” I smiled back at him.

I love writing and traveling 🌿