by Jan Portugal 4 months ago in Young Adult
Report Story 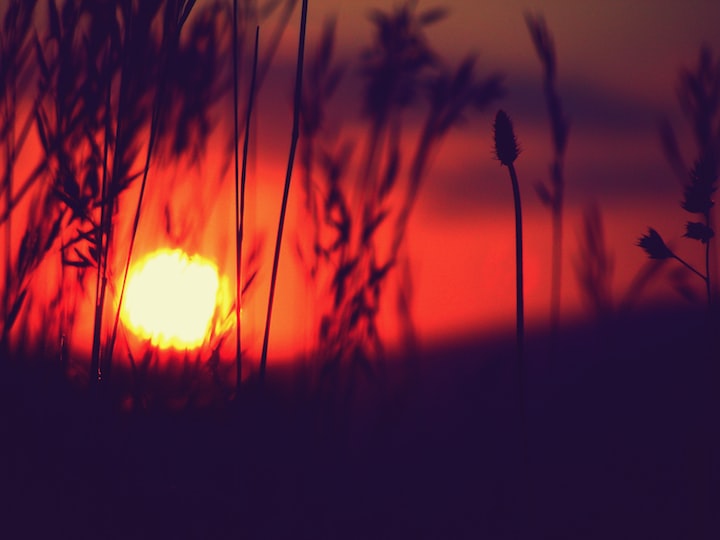 Photo by Delia Ra on Unsplash

Everyone knows the intense color is because the sun is low on the horizon. The infrared rays filtering the atmosphere through dust particles causes the sky to appear blood red. However, there is another substance, besides dust that engulfs the ambient air. Much like a veil there is an invisible sea of vibrating energy that goes unnoticed.

While insignificant to most, in the mind of 12 year old Jeremiah Flynn, where imagination was always on full speed, the phenomenon took on an erie magical quality to be explored. As if it could be shaped and worn like a conjuring cloak. He firmly believed anything is possible when the sky turns red because that's when the magic happens.

Wanting to test his theory, he hopped onto his Shwinn Phantom bicycle, cleverly named, The Black Hornet and shot out slicing through the veils of red haze, his invisible conjuring cloak flapping wildly in the evening brume. He was on a mission to create some real magic. Not deceptive tricks. But spells that would have perceptive earth-changing effects.

Racing against the setting sun he made straight for the windy cliff above his town. All he could think of was the mess the Earth was in because of man’s incessant need for everything bigger and better. Useless junk that ultimately ended up in a landfill or around the neck of innocent marine life.

Lately they had been studying the effects of human pollution in school and it was having a profound affect on him. He cleared a patch of dirt and lit the candle he brought, then with his bottle of water poured a perfect circle around it. “There, the four elements, earth, fire, water and wind were in place, now my pledge.“ He stood up, looked below at the lights of his his town, put his hand over his heart, and continued. Almost verbatim from the code in his science handbook.

“I hereby promise to adhere to the best principles of environmental science for the reduction of the harm being done and help find a solution to improve environmental quality.” The thought occurred to him, “While humans selfishly ignore the heavy burden it puts on everything. Every living thing is a victim of this consumerism, I am determined to address it to the best of my ability.”

And with that, as if in acknowledgement of his promise, overhead dozens of bats flew out from the trees stirring the red sky into an undulating pattern of confirmed acceptance. Jeremiah Flynn was satisfied the ethers were listening. And added. “I am an open vessel for any advice or wisdom sent my way, to help me find a direction.” He paused and ended it with “So help me God.” then spit off the cliff to seal the bargain.

His concerned mind had been watching since the pandemic started he was aware of how it changed peoples lives. What he concluded was this virus was pointing out to the world just who was in charge and how it is going to be from now on. As hard as humanity tried to ignore it, this seemingly insignificant mass murderer was out to take over. It was a battle of Star Wars proportion, just as movies foretold. Gamers had been sharpening their skills for year's and now there was a real enemy to battle. Jerimiah Flynn considered the two battles related and was determined to be an alleyship to find an alternative.

What exactly was this new life-form trying to tell us? Slow down? Stop consuming and killing our keep. Wake up for your own survival? The destruction of Earth has been going on since man discovered he could use a club to overpower whatever he wanted. Out of that experience grew his intellect, with that intellect he claimed power, and from there began the decline of humanity.

To this day the divine radiant Source of every living thing in the universe has been shoved into tiny compartments, rationalized and tucked away until only something as powerful, the size of a virus could alert the need to pay attention. The point being to once again make contact with their natural state of being and stop denying themselves and the world its true happiness.

This was Jerimiah Flynn’s chosen task to wake up and ignite the spark that would hopefully save the world and detour humanity from it's downward spiral. No easy task as he was quiet aware of. He couldn't possible do it without the help of his best friend Josie, they were equally matched in curiosity and concern for the fate of humanity and it's outcome.

After his pledge to find the Source for resolving this apocalyptic problem, the sky was quickly turning dark. On his ride home. He stopped at Josie’s house to tell her what he’d done. She had finished drying dishes and was out on the porch to catch the last bit of red sky. She too was convinced it held magic. She spotted Jerimiah Flynn riding up on the Black Hornet and waved for him to join her on the porch swing.

“Well I did it.” he said breathlessly. “You did what?” she replied, dusting the dirt from his jeans off her skirt. “I made my pledge to the magic in the red sky, asking to show me a way that will help humanity find it's compassion. And hopefully stop destroying everything in it's path.“

“That’s a tall order, but if anyone can do it you can.” she said taking his hand. He glanced at her, “Don’t you mean we can? I'm no good without your mojo.” He said squeezing hers back. “Its interesting you chose tonight to start the process. Just this afternoon I came across a YouTube channel called, Radiantly Happy and watched a video about a pathway to acquiring the true natural self, it supposedly claimed that when you stop denying your Source of being, humanities problems are resolved. You only have to become aware of it. I'll text you the link. It might just be the answer you're hoping for.”

Jeremiah’s jaw dropped. “Wow! That was fast.” was all he said. He felt the magic already beginning to work.

Josie stood up and asked, “Can I get you some Rocky Road ice cream? I'm having some.”

“Sure, thanks.” Together they sat in pensive silence eating ice cream, rocking on the porch swing, until the full moon appeared. Revealing yet another affirmation of his quest.

The next day after school, Jerimiah raced home on the Hornet and chucked his homework onto the bed for later. He made straight for the computer and opened the link Josie sent him. At first he thought it was some kind of spiritual gobbledygook, until he read the words. Their truth rang true, which was exactly what he needed to hear.

One phrase in particular caught his eye.

But where do I find truth?

This reality will challenge humanity to change their point of view that currently rests on the illusionary surface of themselves and their world.

For many this will be a new experience as they never had the opportunity to know who they really are, and they will be very confused. Who can help and support them and show them the way is you, who are willingly dedicating your life to the Truth of the Divinity of your True Humanness.

And as if he were being singled out with these timely words he continued to read.

It is important – and nothing is more in these coming days – that you stand in your heart, the domain of feeling and compassion. That you are rested steadily in yourself, in spite of the many changes and challenges you all will face. It is only love and compassion that counts in these days, and the wisdom and light that is the basis for finding creative solutions for a new life to emerge.

This was exactly the kind of advice he needed to hear. Josie’s contribution was instantly replied to in a text.

YOU ARE A GENIUS! MESSAGE HAS BEEN NOTED AND APPRECIATED…thanks pal. Then added two heart emoji’s.

Jerimiah felt a tear run down his cheek. He could feel a sense of relief and satisfaction filling his heart with this inspiring information. He devoured several more videos on the channel wanting to absorb this new found knowledge. “They don’t teach this in church or school. Where does it come from?” And instantly, as if he felt plugged into his higher Godself the answer appeared. “It’s coming from me. Everything I need to know is already inside me. It’s in my DNA, it's in the DNA of every living thing. It just needs to be realized and lived.”

Jeremiah Flynn had found his answer. He knew exactly what he needed to do.

If this concept appeals to you here is the link Josie sent, its a link to finding out exactly who you truly are, not the shadowed illusion of yourself.

I love the adventure writing takes me on. I enjoy the idea of sharing them with an audience. I hope you enjoy my visions too.

More stories from Jan Portugal and writers in Fiction and other communities.