by Alejandro Melgar 11 months ago in Sci Fi
Report Story

Is it nature or nurture? 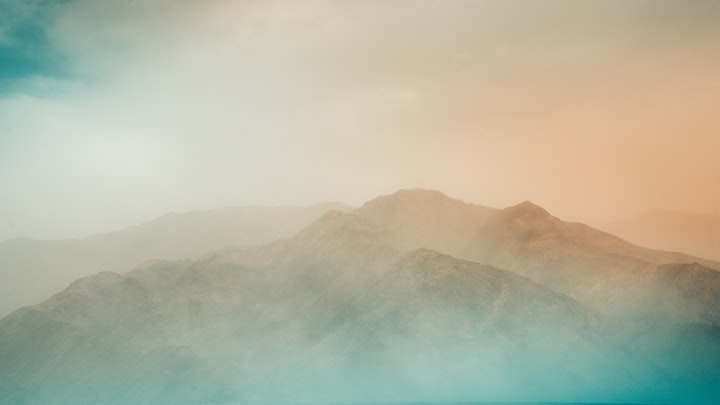 Photo by Meriç Dağlı on Unsplash

The figures moving through the sand-stricken village stop. A man covered in a multi-layered outfit of white and brown, with a helmet that covers his eyes and ears, turns to look at the other figure. He removes the scarf that covers his mouth.

“Not again! We’ve gone over this a thousand times!” shouted Jacob impatiently.

Jacob approaches the figure while the sandstorm whips around them.

The other figure is a hybrid robot, towering over Jacob. It has two limbs that look like arms in the front, and legs behind it, ones that would appear backward on a person, and wheels on the end. It has a series of lights where a face would be, and the body is cylindrical and encased with an iron shell that has been beaten by the elements.

“REM, are you pulling my leg? The mines are inactive. You of all things should know that?”

Jacob reaches up to give REM a pat on its ‘shoulder,’ while hitting a switch at the same time.

“Apology: I am sorry for that mishap sir. I forgot to turn off my mine detector. That must have made for a scare, did it not?”

REM, the robot, has the voice of a male dignitary in political office.

“So much for toning down your humour levels. You ever hear of the boy who cried wolf? Keep that up and it’s deactivation for a week,” said Jacob, turning from the robot and continuing on his path.

“Sarcastic response: My word. I would hate for that to happen. What ever would I do without the accompaniment of you, my fearless and capable leader?” said REM, with a yellow flicker of its lights.

“Very funny. We’re about half-an-hour from camp, so Rook can fix up that wiring of yours and maybe make a permanent adjustment for ya,” Jacob responds, hiding a grin under his scarf.

“Contemplation: Rook assessing my system is not ideal. Only the technician, Alix, can look at my interface. She is capable and always considerate when doing maintenance on my circuitry.”

REM’s lights blink faster. It’s back wheels spin and jolt it forward to catch up to Jacob.

“Proposal: There is no need for that. How about we enjoy the rest of the trip? We are perfectly fine, right?” asked REM, slowing it’s speed as it approaches Jacob.

Jacob and REM continue to move through the deserted, sand-stricken, village. The sandstorm continues to try and impede their progress, with no success.

As they move through the abandoned village, Jacob turns to look at the various houses littered throughout.

Most of the houses are collapsed with only the floor remaining and some pipes sticking up from the ground. Other houses have a couple walls up at most.

A playground set sits in front of one of the houses Jacob looks at. Sand covers a broken seesaw and a roundabout, and what was once a climbing dome is now bits of metal strewn on the ground.

“Because it reminds me of my kids. I’ve never been able to see them play in a playground, let alone put them on a swing and get them as high as their little bodies want,” Jacob drops his head.

“Compassion: I am sorry for your loss. It must be a difficult thing to work through. I am always here for you and will gladly listen.”

Jacob, indifferent, snaps back. “Aren’t you programmed to respond like that?”

“Probing answer: That is right, I am programmed to respond with compassion; however, aren’t humans programmed, thus, taught to show compassion, empathy, and patience? According to my data logs, humans are not born with these social skills in their biology.”

Jacob, frustrated, says, “What is with you today? For a companion robot, you sure can be annoying.”

Jacob kicks at the dirt and continues to walk down the road. REM follows.

“Answer: I only respond based on my programming. If need be, I suggest uploading a backup memory file. Rook performed maintenance on me two days ago. A horrible mistake if I do say so.”

“Of course.” Jacob removes his scarf and spits on the ground.

When Jacob reapplies his scarf, he sees a house that is largely intact.

Jacob turns to REM. “REM, do a scan of the area – NOW – and remember, the mines are NOT active!”

REM’s lights flicker between white, red, and orange. Its front limbs move to the side, lifted horizontally, and its torso starts to spin on a swivel that is above its legs.

Jacob reaches into his pack and pulls out a pair of binoculars and lowers himself to a crouched position. Lifting them to his goggled eyes, he looks at the house.

REM stops spinning after a minute. Its limbs return to its front, and its lights flicker white again.

“Update: SCAN COMPLETE. AREA IS SECURE.” It's one of the few times when REM loses its human-like voice.

Jacob puts the binoculars back into his pack and stands up.

“REM, I need you to turn on your defensive matrix. That house wasn’t there before, so it might be the Vaux and an illusion of theirs. We need to be careful.”

Jacob pulls out a 9mm pistol from his satchel and checks its rounds.

The house is at the edge of the village, against an escarpment that circles around the village. They move off the beaten path that leads to a gorge, which leads the way to their home base.

“We can’t be too careful, so stay on alert,” says Jacob, holding his pistol with both hands as he approaches the mysterious building. REM’s lights stop flickering while it moves; instead, turns on a yellow light underneath, shining onto the ground.

Jacob stands in front of the house. It is a large, two-story house that 20 people could live in. Its windows are nailed shut with planks of wood, and the porch is empty, leaving the door without a scratch on it.

Jacob silently moves up the stairs leading to the porch, looking from the left of the house to the other. The porch stretches all around the house.

REM stands behind Jacob, awaiting any type of order. Jacob moves to open the door, which opens as soon as he touches the handle.

“Keep quiet REM,” said Jacob as he moved through the door.

REM’s wheeled legs bend down, and then it springs forward on to the porch with a large thump.

“I guess it can’t be helped,” said Jacob under his breath.

The interior is dark, with blankets covering furniture in the living room.

A cardboard box rests in the middle, opened, and inviting.

Jacob moves closer, still on guard, while REM moves behind him.

He kneels to inspect the box, putting his pistol down to rummage through it.

There are dolls with missing arms, a toy dump truck missing a wheel, and scuffed up trophies and medals. While Jacob is digging, he sees a small box that has an exquisite design. When he grabs it, he notices and feels a velvet surface. He rubs the box, lifting the velvet to one end with a stroke, and smooths it out with another.

Jacob, mesmerized at the design, lifts the box lid open. He sees rings, necklaces, bracelets, and earrings; however, his eye catches a locket, one shaped like a heart.

He grabs it and drops the velvet box into the larger one, amused at the little thing.

With his other hand, he reaches for his helmet and snaps at a clip that releases the visor covering his eyes, opening and moving at the hinge on the other side.

He touches and feels the locket, sitting in wonder of the little thing. His white eyes are bewildered at the sight, all while moving the locket between his fingers, looking maniacal.

“Query: Sir, what are you doing?” asked REM quizzically.

“I – I found – this wonderous – THING!” cried out Jacob. His eyes are wide eyed, and his mouth is open and smiling at the discovery, all while crouched low to the floor. A toddler with its plaything.

“Request: Sir, that thing is an old piece of jewelry. Please put it down, it serves no purpose for you.”

Jacob continues to play with the locket, ignoring REM.

Its torso spins, whirring away, gaining speed while its head lights flicker at increasing speed.

REM stops spinning, opens its front compartment, and shoots out a thin hose with a sharp end into Jacob's back.

Jacob immediately stands up, and his body vibrates and shakes. His arms move to his side, and he continues to shake for a few seconds, his feet thumping loudly on the floor.

REM retracts the hose into its body, and Jacob falls to the floor on his hands and knees.

“Answer: You fell for a Vaux illusion and alerted them. That locket had you entranced. They will be here soon.”

“Continued: I had to administer shock treatment to bring your senses back. I need to carry you now. Hang on” REM said while reaching for Jacob.

Before Jacob settles into REM's limbs, he sees his pistol and grabs it, and adjusts his helmet for the elements.

As REM exits the house with Jacob in its arms, vehicles with large exhausts are heard in the distance.

REM shoots a holographic bubble from its body that encapsulates them both. REM then jumps from the porch to the dirt ground and speeds off toward the gorge leading to their camp.

Jacob, still in a minor daze, readies his pistol. REM, at its top speed, moves through the gorge, effortlessly jumping over rock and debris.

“Easy partner, we don’t want you to run out of juice before we get to camp,” said Jacob.

“Answer: It is in my programming to make sure you and the other humans survive against the Vaux. Any means necessary,” it said.

The two are almost to the other side of the gorge. REM pushes forward, keeping its pace consistent.

“Reassurance: Once we pass the gorge, I’ll slow down. The other support units can help as well.”

Jacob grabs REM's torso and looks behind it. The Vaux vehicles are at the entrance of the gorge. The two are far enough ahead that the cloaked creatures give up chase.

“Reassurance: Don't worry, it is in my programming to protect you.”

In a habitual manner, Jacob stretches into REM’s limbs, lying across them like he is in a hammock.

“Joking query: So much for being careful, right sir?”

Jacob, stirred from his infancy at realizing his mistake, laughs heartedly.

He removes his scarf. “You’re annoying as hell sometimes, but you’re still a friend in my books,” said Jacob, continuing to laugh.

“Response: I see you as a friend as well.”

Jacob asks, “Isn’t that in your programming?”

“That’s where you’re wrong.” He raps his knuckles on its chest.

Jacob looks ahead and into the horizon. They make their approach on the camp of survivors. The camp of friends and family.

Alejandro Melgar is a former fitness professional turned journalist. In his early thirties, Melgar has worked various vocations throughout his twenties, and is now cultivating his writing through fiction while continuing to write news.

More stories from Alejandro Melgar and writers in Fiction and other communities.