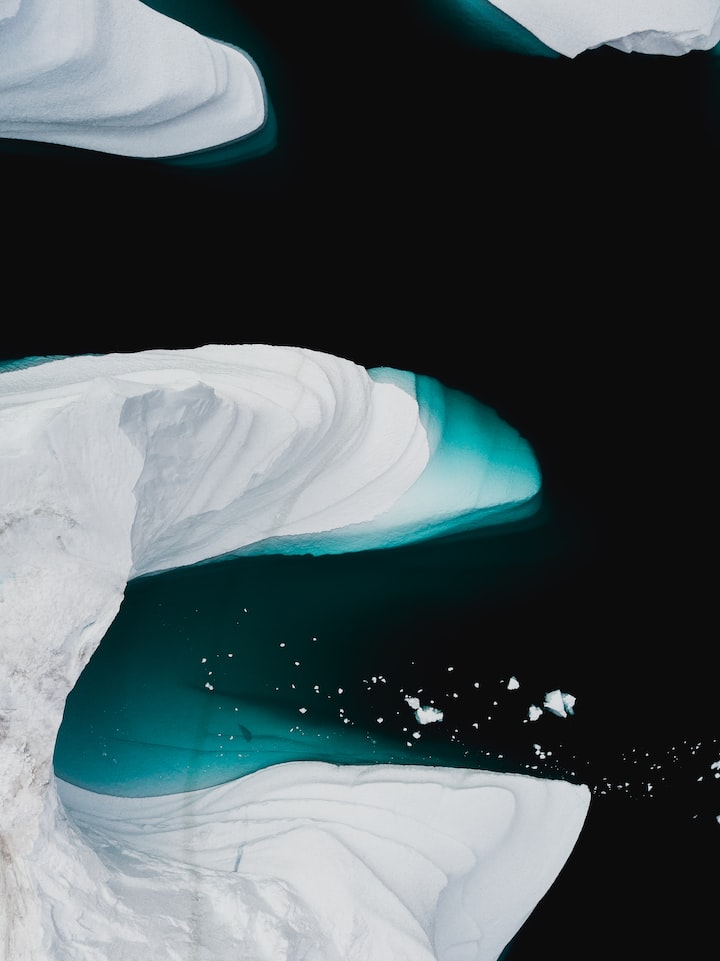 It was mid-February and the late fall heat wave was finally over. Outside, the temperature was cooling. I felt the cold hit my face for the first time in years since migrating north. I was eight when our family decided to take the journey to escape the southern heat. Both Papa and Daddy said that up north, we might still have a chance to live a comfortable life, even if it’s completely dark for parts of the year. I was nine now and my sister was six. For the next week and a half, I was going to get the chance to experience true winter. While I didn't know it at the time, Baker Lake was going to freeze over completely for the last time.

The alarm clock went off to tell us that a new day had started, despite there being no light outside my home. I felt my body shiver a bit. I almost didn’t want to leave my warm bed, but Papa said we had to go outside.

My sister and I were in the same small bedroom. It was difficult to get lumber all the way up here, Papa said. That’s why our house is smaller than the one we had before. But I was okay with the room and bed I had. It was better than the cramped sleeping bag I was sleeping in. I’m not going to grow as tall as Daddy or Papa because we don’t share the same blood apparently. But Papa said that blood doesn’t matter when it comes to family. We make our own family.

I stepped outside wearing an oversized coat. My hands couldn’t reach the ends of the sleeves, so I didn’t want to wear gloves, but Papa insisted. One day, he said, I was going to grow into the coat, so I needed to learn to wear gloves in case I was going to need them. Finding coats was hard to do nowadays. Even my boots were too big. It was still dark outside, but I could hear them step on something crunchy. I reached down and touched snow. It easily melted in my hands, but it was great for snow-ball making. I threw one at my sister and she cried. Papa was not happy.

Daddy was out working that day. I hoped he saw the snow. We ended up walking towards the big lake. There are several small lakes and ponds around Baker Lake, but the one we went to was huge! I wanted to go for a swim but Papa warned me that the water would be much colder than it was the day before, and that I would freeze. I doubted that, but didn’t try, just in case.

Daddy was an immigrant and came here to learn medicine. It was why he still had a job. Papa met Daddy when they both went to an art gallery. Papa was an artist and had many art exhibits. I’ve never been to one. The one near our last home burned down because it was too close to a forest. Our house didn’t have forests, but we still decided the heat was too dangerous. Daddy taught me the word “Epidemic”. E-P-I-D-E-M-I-C. He said forest fires were an epidemic. I had to leave a lot of my friends back home even though I really didn’t want to. Daddy said leaving his country was one of the hardest things he had to do, but he had to do it. His country became a “dessert”, but not the sweet kind. I asked him if he still talks to his parents, but he just told me no. He looked sad.

A few days later, I went with Papa to meet with some people he called the tribe leaders. I got to play with another child named Sam. He had toy cars and we raced them. I wanted to ask Papa if I could invite Sam to play with us, but he seemed too busy. Sam told me about how he hopes to skate this year. He told me that a few winters ago, the lake froze over and he could skate on it. I just kept wondering how he didn’t sink. He told me it was all ice and that you couldn’t sink. I’ve had ice cubes in my drink before, but every time I poked it, my fingers would dip in the cold water. Papa then told me we had to go back home. He had to write a “chronicle”. C-H-R-O-N-I-C-L-E.

Papa explained that Baker Lake was once home to eleven Inuit groups who lived here long before we arrived. He said that today, only seven remain, and others are migrating further north again. There used to be a mine but now it’s used for shelter. Papa said he expects more people to move up. I asked him if my friends will be moving up as well, but he said he didn’t know. I asked him if I could go skate with Sam, and he said he hoped the lake will be frozen enough soon. It might take a few more days and lower temperatures. Later that night, I saw Papa cry as he was trying to write his chronicle. I asked him if what he was writing was sad. He said no, but that he felt sad regardless. He let me read it when I asked to, but it didn’t make me sad, just bored.

Papa taught us about the planets in our solar system. We didn’t have formal school, which was something that used to be mandatory. We learned about how some people live on Mars. I said I want to live on Mars, but Papa said we wouldn’t live long because there’s no more food being sent. He also said that our planet is becoming a bit like Venus, which is why everything is becoming so hot. I suggested we should live there instead, if we’re already becoming like the planet, but he just smiled at me. Then we did math.

Daddy came home that night and told us that he treated a man who was attacked by a wolf. He had really bad bites on his body, but he was going to survive. I asked him if the man also saw a polar bear, but Daddy told me that they went extinct. E-X-T-I-N-C-T. What about the yeti? I said. He said those were myths. We still had to be careful though ad watch out for wolves.

My sister and I went for a walk outside a few days later. Papa didn’t want us to go too far, so we decided to try and build a snow fort. The snow wasn’t sticky enough. It was much colder than it was before, and my nose felt weird when I breathed. We made snow angels instead and decided to go one of the small lakes. My sister and I had never seen so much ice before. Only in our drinks and sno-cones. In the middle was a thin sheet of ice. We could still see water, but just as Papa said, maybe it’ll cover everything.

I would not have to wait too long. It was a week later when the lake froze completely. I found Sam near the lake with his mother. Papa had arranged for both my sister and I to get a pair of skates each. We borrowed them from other kids, but we didn’t mind. I was excited to be on a lake. Part of me was still scared I would fall through like my fingers do with ice cubes, but then I saw other children on the lake and I stopped being scared. Once on, my legs felts really wobbly and I fell over a lot. But holding Papa’s hand, I felt a lot more confident, and I was able to skate really fast after a while.

I was really tired after that, and really hungry too. Sam and his mom came with us and we ate our ration packs together. We got to play a board game, and I won a round, even if I didn’t completely understand the rules. I think maybe Papa let me win that time, but he swears he didn’t. Sam and I then went pout playing in the snow again. We made a promise to each other to be best friends and never leave each other. We wrote a contract together like Papa once showed me. It said: “This contract means that Sam and Henry must stay bestest friends no matter what. The penelty is not being invited to each others birthday parties or each others wedings. Signed on Feburary 25, 2087.”

Sam and I stayed best friends for as long as we both could. After that night, it got hotter as spring would arrive. On the first of March, he told me he was migrating further up north with family and he’d be moving away in a few months. By then, the ice had already melted and the heat wave from the south came up fast. I was mad at him for leaving and decided not to speak to him anymore. I even tore up the contract. Eventually Papa got me to at least say bye to him before he left. By then the sun was already coming back and slowly the days got even hotter. We became friends again and promised we'd go skating together again next winter. We tried to get his mom to agree with our promise, but she said she wasn't sure what the future held for us. She looked sad, but I didn't ask her why. I said she could always come and visit us anytime, but when I looked at Papa, he just shook his head. I waved goodbye as he drove off later that day. I haven't seen him since.

The next few winters, cold temperature would bring some ice, but it never fully cover any of the lakes. This winter, I wanted to try skating anyway, but Papa said I would just fall through. I doubted that, but decided against it, just in case. I'm holding out hope that if the lake freezes over again, Sam will know to come, and we'll skate together then.

Also a fan of non-fiction, history, science, biographies, and wellness.

More stories from Jay Olivier Morel and writers in Fiction and other communities.