by No Introduction 10 months ago in Short Story
Report Story

Two best friends spend time thinking about how quickly time passes and what's to come of their future. 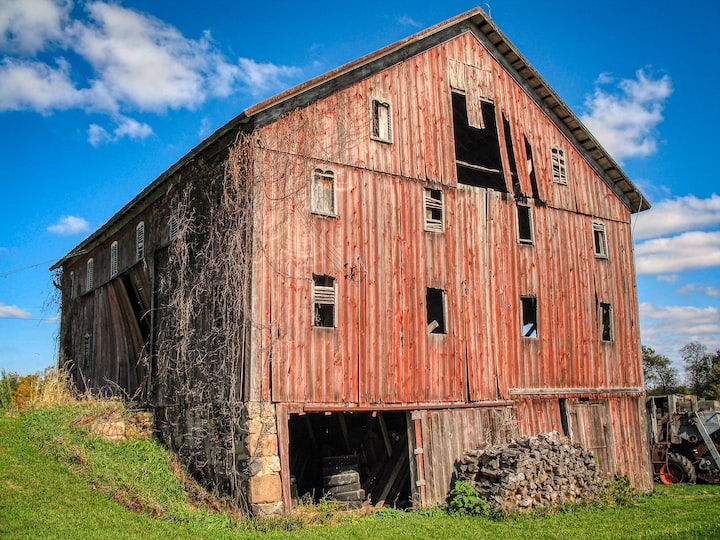 You can hear the sound of heavy traffic way off in the distance. The weather is foggy out, which is typical for Oregon weather, and it is cold, but a bearable cold for conditioned people. The sound of wildlife that is local to this area sounds off with their own howls and sounds to one another, like a symphony of animals and insects blaring softly throughout the fog. Puddles of water are scattered through the area and full of tadpoles waiting to grow, all of them wiggling and darting through the mounds of other tadpoles in their way.

In the center of it all is an old deteriorating barn and further away from it is a home. The red paint which has been weathered away on most parts of the wood are shows the natural color of it but is also weathered, and the only sign of anything lively near are the animals that hide themselves away in the alcoves of the damaged wood. Mice scurry around in the dark and avoid getting seen by the barn owls that sit perched at the top of the barn, close to an opening in the side that lets light.

Outside of that is Derek and Janie, high school-aged kids walking around the outside, both with their heads to the ground.

"It's crazy that it's the last week of school," Janie says. "It seems so surreal, you know?"

"Yeah, it's weird to think about. We are just sort of going off to do our own things now," Derek replies. There's a softness in his voice.

"You sure you really want to take a break from school?" Janie asks.

"Part of me wants to start school in the fall, and I still have time to decide later if I want, but for now I feel like I want a break from it all," Derek says.

Janie looks up at him, her stare trying to get his attention from the ground. "My parents told me taking a break would make me convince myself that I don't want to do school anymore, that if I take the time away I won't go back at all."

Derek eventually does look up at her and says, "I get that. I just... I want to travel a bit, you know? There's so much even here that I haven't seen in my life. I just don't want to go back to school immediately and be unhappy."

"I'm worried about that too. I'm not a huge fan of school, but I enjoy the routine," Janie says, eyes drifting around to the scenery around her.

"Yeah," she replies as her eyes return back to Derek, "I like having something to do most of the week. Knowing what I'm supposed to be doing and how much time I have to do. Everything is so easily scheduled for us. I don't know what I would do if I had no schooling or work to keep me busy,"

"I never thought of that. I guess I could travel a lot this summer and go back to school in the fall. It's weird knowing we aren't going to be close anymore. Really makes me think." Derek says.

The fog is starting to dissipate, allowing a small bit of sunshine to lay its sun rays along the slightly damp grass.

"We will still be in touch. You HAVE to call me like every day. Or I'm going to bug you until you do." Janie says with a giggle in her tone.

Derek is quiet for a few moments. The look of a thousand thoughts racing through his mind at once. He doesn't notice that Janie is trying to be playful.

Janie realizes this and shoves Derek playfully, saying, "Bro, stop thinking about things so much! You are already stressing yourself out way too much".

Derek laughs slightly and gets themself balanced back on their feet. "Yeah, yeah, you say that, and then leave me on read and never reply back", he says playfully back, which makes Janie burst out into laughter.

Derek takes a moment to look around and notices the sunlight shining through the side of the barn, and remembers how they used to climb to the top floor of the barn and lay on the ground, watching to see when a barn owl would fly in or out.

"Up where?" Janie replies.

"Up in the barn. Remember when we used to climb up and just lay in there?"

"Yeah, but it's probably dirty as hell in there now." Janie says.

"Won't know until we see," Derek says turning quickly and entering the barn.

The two walk in and immediately notice how everything is drudged over in dust and dirt, the farm equipment looking like it hasn't been used in years. Spider webbing sprawling across an old workbench with tools left sitting in the place they were placed last.

They walk over to a set of stairs and go up, carefully setting each footstep down lightly so they don't fall through. The second floor is emptier with only a few different farming supplies tucked away in the far corner, and just a few pieces of wooden furniture sitting in random spots of the floor.

The sunshine is piercing through the hole in the side of the barn, illuminating the room enough to notice some of the barn owls hiding in the top of the barn. Derek kicks away the small amount of hay and dust for both of them to lay their backs on the ground.

"I can't believe how long it's been since we been up here," Janie says looking around at the ceiling.

"After my grandpa had the shed built we kind of made that our hangout spot for family hangouts. We kind of just left this here," Derek said looking around again.

The two drop down to the floor and lay down. The sounds of everything from outside seems completely gone, and they just focus on the ceiling of the barn."

"It still seems so big in here," Janie says.

"Lots of space," Derek joked. He looks over at her. Janie keeps her eyes straight ahead.

"No you're the one in their head," Derek says.

"No, it's not that. We haven't been in here in so long and now we're about to be away from each other. Just so crazy to me how quickly things happen.

"Do you think we'll look different when we see each other next?" Derek asks.

"Probably. Our parents have good genes, so at least we know we will look semi-normal after a while," Janie replies.

"Yeah, I guess," Derek says with a sigh.

The two are quiet for a moment, slowly breathing in the realization of their circumstances.

"Stay here? I don't want to stay here," Derek replies. "And you are the one who's leaving really, so-" Janie interrupts.

"No, no, I don't mean you stay here now. Remember when we were kids and I came over after my parents separated, and we came up here to hang out. After a while, you were going to leave, and I asked you to stay. Do you remember that?" Janie asks with a softness in her voice.

"Yeah, I do. You were going through a lot." Derek says.

"It feels like forever ago. I love that we are still friends after all this time. We got to have a lot of the same classes and everything together. It's going to be weird not having you on the same campus as me. Weird that I'll be in college. Ugh, everything is so weird." Janie exclaims.

Derek looks over at Janie, whose eyes start to water a little bit, with a drop sliding down the side of her face.

"Bro," Derek says playfully, "I'm not going anywhere. Sure, we'll be farther apart, but I still got your back," he says while reaching over to wipe the tear away on one side as Janie wipes the other side away. Derek lifts up his arm and extends out his pink.

Janie looks over at Derek and extends her pinky out as well. and they lay their hand down together with only their pinky's interweaved.

"We got this," Janie says with a shaking voice.

"Yeah we do," Derek says with a similar voice.

The two lay there as the sunlight continues to drift through the opening of the barn. The light turns from florescent white to a golden ray burning itself slowly into the old wood, the peacefulness of the nothing going on allows all things to be at ease.

More stories from No Introduction and writers in Fiction and other communities.