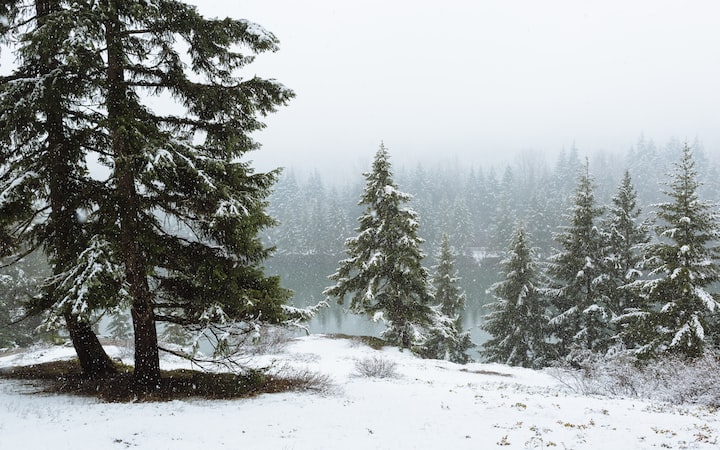 Photo by Dave Hoefler on Unsplash

Snow has been falling all day with the temperature dropping a degree every couple of hours making everything dangerously slippery while the plows and sanders have been out all day barely able to stay ahead of the falling snow. Danny had just gotten off a long shift at the factory and was looking forward to a warm meal and a warm bed when his phone rang and an unknown number appeared on the screen,

“Hello, hello, who is this?” he asked as he put the phone to his ear and a low voice started speaking,

“Is this Danny, Danny Anderson?” she asked,

“My name is Desiree and I’m a friend of your sister Amber, Desiree Thompson,” she answered. “She left here this morning and was on her way to see you and we haven’t heard from her, so I was wondering if you were talking to her today?” she asked,

“No I haven’t been talking to her and you said she left this morning. Why in heavens name would you let her leave in this weather?” Danny asked with a bit of anger in his voice,

“We tried to stop her, told her it was crazy but she wouldn’t listen and said that she had to see you now and wouldn’t tell us why. Then she jumped in her truck and left,” Desiree explained,

“Well thank you for calling and letting me know and I’m sorry that I raised my voice at you. I know how stubborn she can be, she gets it from me. I’ll let the local authorities know about it and when I find anything else out I will let you know,” Danny answered and then he ended the call, jumped in his truck, and went to the local police station.

When he arrived there were people everywhere wondering what was happening and why they couldn’t leave town, the roads haven’t been touched in a couple of hours and there is that much snow down that they are getting impossible to drive on. The officer looked around and put his arms up above his and started waving them,

“ Hello, hello, can I get your attention please,” he screamed at the crowd and everyone went quiet as he began to speak,

“I know that you all are under a lot of stress, so am I and I will tell you all that I know. Earlier today there was an accident up on Pickers Point involving multiple vehicles closing down the highway and now there is no way anyone can get through. The plows are stuck behind the accident and the secondary road is impassable during the wintertime,” he explained as the crowd talked among themselves when Danny spoke up,

“What about Pickers Pond? It runs right up along the highway and there must be at least a foot of ice on it. I’ll drive my truck up there and see if I can lend a hand,” he said and then looked over at Tommy,

“Tom, go grab your wrecker, you should be able to get up to the accident in that and try to help them out and I’ll come around the other end on the pond,” Danny said as he jumped into his truck and headed for the pond.

Meanwhile Amber was trying to keep warm as she looked at her wrecked truck sitting down on the pond along with a couple more cars. She was lucky she was alive when earlier a semi lost control coming around the turn and t-boned Amber’s truck sending her over the embankment and landing on the frozen pond. There were five vehicles and a semi involved and luckily no one was seriously injured but the truck completely blocked off the road stopping all traffic. Rescue vehicles were dispatched but they were coming from the other side of the mountain and with the snow had to deal with other incidents on the way, so no one knew what time they would get there. Amber then crawled back down the embankment and went back to her destroyed truck, thankful that the ice was still holding on the pond. It was called a pond but it was more like a lake winding its way down through the valley for miles and when she looked she couldn’t believe her eyes.

After Danny left the police station he headed out the highway ahead of Tommy and then turned off at the boat launch heading to Pickers Pond. He slowly edged his truck slowly towards the end of the boat launch and slowly drove his truck onto the ice praying that it would hold and started to pick up speed. Some of the other residents jumped on their sleds and were coming up the frozen pond behind Danny. When they came up to a turn in the pond Danny slightly turned his front wheel and he began drifting sideways and that’s when he saw the vehicles on the pond on someone standing among them. Danny then radioed Tommy and told him the situation as he slowed his truck and came to a stop in front of his sister. Jumping out he ran to her and gave her the biggest hug thankful that she was alive and safe, then helped her over to his warm truck where she told him what had happened.

As Tommy tried to free up the accident and get the hi-way opened up once again while Danny and Amber went to see the other motorist to see if they needed any help. After the authorities arrived Danny took Amber back to his home but not before they went for another drive on Pitchers Pond to thank it for saving his sister's life.

Receive stories by K.C. in your feed
K.C.
Read next: Thorn of the Rose