by A Baptiste 7 months ago in Fan Fiction
Report Story 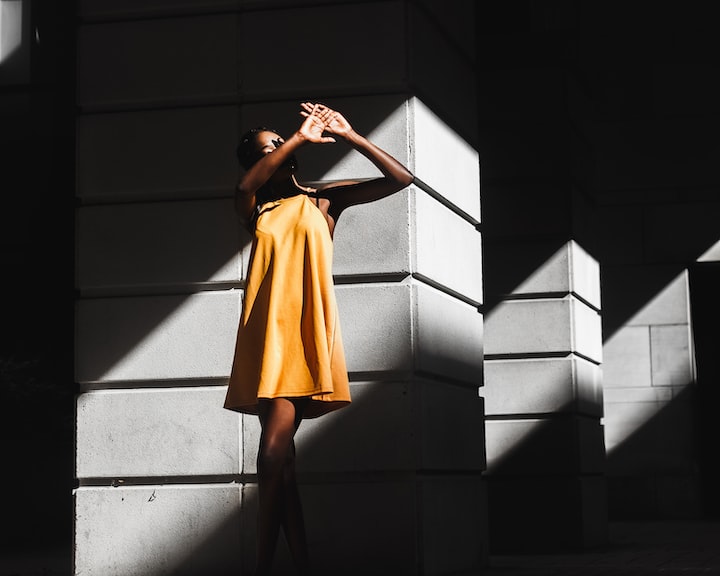 Photo by Oladimeji Odunsi on Unsplash

She’d always hated shopping, though. How bright the fluorescent lights were, how cold it always was. The sheer number of clothes to choose from, with all their "textures" and "patterns" and “color combinations” and whatever else.

That is why, most times, she let him do it for her.

He'd come over to where she was leaning against a wall or a shelf, poking her with the end of a hanger. He'd make her try on dozens of outfits, cupping his elbow with his hand on his chin and looking up and down before finally nodding.

And he’d always paid, even if she had way more money than he did.

Even if she never understood why it was so important to him, it became a sort of tradition for the two of them - something she came to expect. (She could do her job in sweats as long as it got done, she’d said, and to his horror, she had.) Besides, more often than not, his pretty pieces would get stained or torn on something.

He'd whine and pout about it for hours until she let him buy her something to replace it.

The thing that she'd kept the longest, or rather, the thing that hadn't torn, was a silk wrap dress with a little bow that shined like an emerald when the searing light caught bunches in the fabric.

He always started with the dress or suit or whatever first so that the other pieces would be sure to "complement it."

It reminded her of speeding through France, the countryside a blurry and vivid stroke of bright green. His hair sweeping over his forehead, curls free and wild. His body was loose, hand relaxed on the stick shift.

She tried to pretend that she couldn't feel him sneaking glances at her behind those obnoxiously large Versace shades.

The shoes were the second most important part of an outfit to him, since if they had buckles or details, the jewelry just had to match. He insisted that the right shoes would make or break an outfit. She never really had much of a choice of what kind of shoes to wear, regardless of his insistence. The places they'd go for work often required more formal clothing, anyway, and formal attire meant heels.

They even came in handy once, not that he was particularly pleased about it and moaned for days afterward.

She preferred being barefoot, really.

The hotel carpet was plush underfoot, and she'd idly run her feet over it, sleepily watching through half-lidded eyes as he poured himself another glass of something that smelled strong and expensive. She could hear the traffic below, and the breeze from the balcony inflated the sheer curtains.

He always complained that he never saw the point of separate rooms if he always ended up sneaking into hers like this, but she insisted.

She thought about getting her hair and makeup done, but thought better of it.

He'd taught her some simple tricks when they had a layover in Tokyo one time, in the middle of the airport with cosmetics from a shop between a gift shop and a ramen place. Much to his annoyance, she kept moving, and he ended up grabbing her chin to hold her still.

He likes her hair down, she thinks. It was a nuisance to her, always having to brush it out of her eyes and throw it over her shoulder, but she caught him staring more on those days. Once, when he was walking her to her room after dinner, he reached to brush a strand behind her ear.

The warmth was there, and then it was gone.

In the end, her jewelry didn't match the buckles on her shoes. They were a pair of earrings, silver metal looped and coiled around a beautiful stone that he had told her the name of, but she’d forgotten.

It was the only gift she had technically chosen.

They'd been window shopping in Czechoslovakia, and she’d paused in front of a window for a second too long.

She insisted that she was only looking, that he really didn't need to buy them. He ignored her. He complained about how they were cheaper than anything he'd offered before, and she fired back that he should shut up and cut his losses.

She looked at them as he paid the cashier, held one up, and watched the way they turned and caught the evening sun. The patterns played on her face, formless blue-green shapes jumping across the contoured lines of her face, nose, the smooth skin of her cheek.

She reaches the table at about half-past eight. He was already there, of course. A dark suit jacket resting over his shoulders, a thin gold chain dangling from his wrist and catching the low light.

"Ah, so you had been listening," His eyes raked over her figure, darting back to her trembling earrings. He waved the waiter away with a graceful motion, a smile curling onto his lips. "A little."

Her eyes were sharp.

She stares at him, stiff and perfect and statuesque.

"I know I'm handsome," His smile curls smugly. "But staring at me the whole time is weird! It gives me the chills. Besides, enjoying good food alone is a sin. Indulge me, hmm?"

She rolls her eyes and signs her order to the waiter.

"Again, that outfit is magnificent. Well," He rolls his head forward. "You did learn from the best.”

'You're making me regret this.'

"It's a compliment, amore."

They ate and sipped in silence. He never looked away.

She reached for her clutch.

"Wait," He said, pouring himself another glass. "At least let me make a toast."

She exhales deeply, looking at him for a long time.

She puts it on the table, hand still inside.

"To my lovely partner," He tilts his glass toward her. "That's you."

She huffs. Even now -

"The most beautiful grim reaper I've ever known. I always knew it would be you," He sighs dreamily, pressing his thumb to the end of the silencer and stroking it lovingly. "Do you remember what I said that night in Egypt? In that room where you could hear the Nile lulling us to sleep?