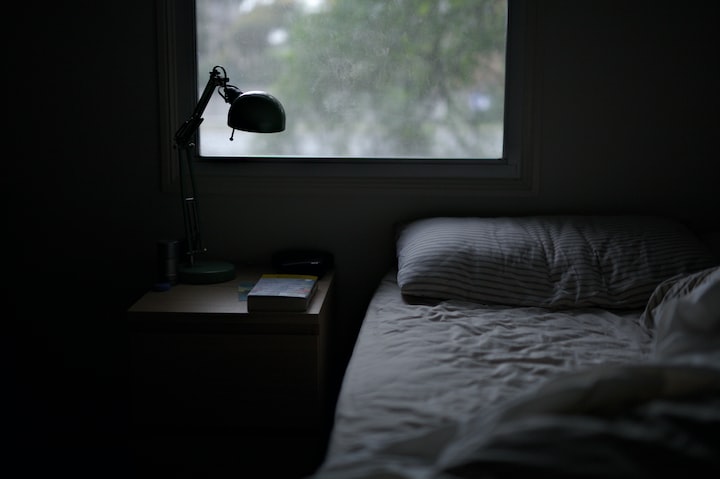 Photo by Alexander Possingham on Unsplash

Amy woke, her body frozen. This was not unusual. But it was annoying.

She’d thought she had her sleep paralysis under control, but apparently not. Her anxiety had reared its ugly head recently with her promotion at work. She’d had a low-level anxiety attack going for about a week, so it wasn’t surprising when her sleep started to be affected. First, she’d struggled to fall asleep. Now, this.

If she could get her toes moving, maybe her fingers, she could climb out of it. The problem was, she was still partly in sleep. Her mind easily conjured scenarios where she successfully moved, got out of bed, and went about her day, only for her to realize she was still lying in bed. When this had first started happening to her, she would touch objects around her once she was out of bed, noting the different textures, something her brain couldn’t replicate as a dream.

Or so she’d thought.

The more frequently it happened, the better her brain became at tricking her. She could touch her cell phone and think she was really touching it, rub her feet on the carpet and feel the plushness, only to be jolted awake a few minutes later, never having left her bed.

Deciphering what was real and what was a dream was becoming harder and harder.

Her toes refused to wriggle; her fingers stayed curled beneath her chin. But her eyelids fluttered open.

Amy knew better than to open her eyes while in the grip of sleep paralysis. In this strange state of half awake, half asleep, the brain could conjure dream images—hallucinations—when the eyes were open. Amy had never, ever opened her eyes when suffering sleep paralysis. Until now.

She nearly sighed with relief when she looked out through bleary eyes and only saw her darkened bedroom. Her nightstand, her dresser, the mirror on the back of the door…

There was something in the mirror.

It was just a shape, a shadow, but with red, glowing eyes, staring at her.

She threw herself out of bed, falling to the floor. She turned on the lamp, illuminating the room. She felt the soft carpet beneath her fingers, the ridges of the lamp switch.

The thing in the mirror was gone.

Despite telling herself repeatedly that it had been a hallucination, Amy felt jumpy all day, as if the thing in the mirror were hiding behind every corner. It was nonsense, and she knew it, but just as she struggled to tell if the phone she was touching was really hers or a dream, she couldn’t shake the sense that it had been real.

She tried meditating that night to calm her anxiety before going to sleep. Her doctor had told her it would help, but she didn’t have much patience for it. She didn’t feel any more relaxed after meditating than before. Giving up, she went to sleep.

She woke up frozen again.

She kept her eyes closed—she didn’t want to see those glowing eyes again—but a noise crept toward her ear. A hissing, a whispering. It felt close, too close.

She kept her eyes closed.

Amy knew she was hallucinating. She did not want to open her eyes.

The hissing continued. It fluctuated—it was moving. Getting closer.

Amy threw off her blanket and sat up.

The room was empty. The sound was gone. She turned on the light.

Red eyes glared at her from the depths of the closet

She screamed and jolted awake.

Heart pounding, Amy turned on the light for real, digging the switch into her fingers so she would know for sure this was not a dream.

There was nothing in her closet.

She felt a slight tremble all day, her heart beating just ever so harder, her hands shaking just a little as she poured coffee. She turned the corner to her office door.

Red eyes stared out from down the hall.

Amy screamed and woke up.

Lying in bed, she dug her nails into her hands. Enough to hurt, to bleed.

She was awake. This was real.

She made it through the day, feeling as jittery as if she’d downed the entire coffee pot at work. There were no red eyes staring at her from around the corner, nothing hiding in the shadows.

That night she meditated, trying hard to calm her mind. Amy went to sleep, fearing what she might wake up to.

When she drifted back to consciousness but couldn’t move, her heart started beating rapidly.

They were just hallucinations, she told herself. Nothing here could actually harm her.

She tried moving her toes, her fingers, anything other than her eyes.

Her body tilted, moved, as if the bed had dipped. Vestibular-motor hallucinations, she told herself, although this felt nothing like what had been described to her before. It felt like something was crawling onto the bed…

Her finger moved, and she burst out of her blanket, heart pounding.

There was something at the end of her bed. Something with glowing red eyes.

“Wake up!” Amy yelled at herself. She bashed her hand against the wall.

The thing with red eyes was still staring back at her.