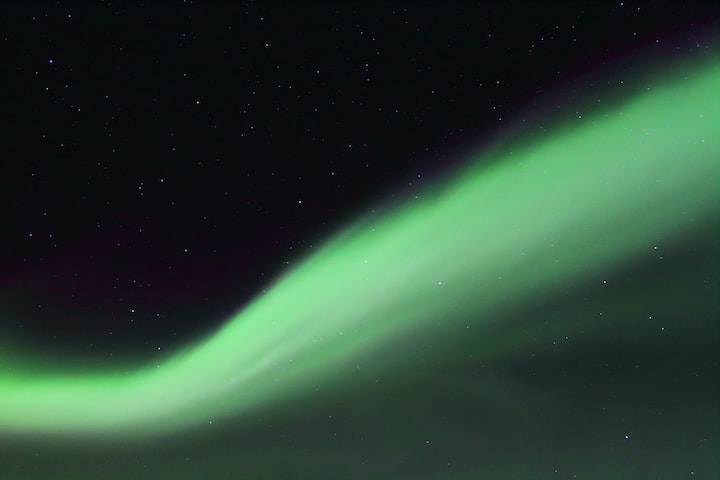 Photo by Dan Morris-Smith on Unsplash

We drove up the snowy, winding road towards the cozy A-frame cabin. Not much was said during the ride, I was never that good at speaking my feelings.

We were heading back after buying groceries at the city’s only store. It was our last night at the cabin, and I had yet to see the Northern lights. I had tried twice before in previous winters but failed. That freezing, starry night was my last chance this year.

I caught myself thinking: “How did I end up here? In a near polar night, about to have dinner with a Norwegian grandpa who barely speaks English?” I was determined to find those lights; I needed to.

We reached the cabin and Lars quickly lit up the fireplace, while I took the groceries out of the bags. He promised to make me dinner as a gesture of kindness, before my departure in the morning. Lars was the owner of the cabin I had been renting for my pseudo-weekend getaway. He knew I really wanted to have seen the lights, and he could tell I was bummed out. Though, I never told him why.

"Salmon and potatoes", he said.

We couldn’t really communicate due to the language barrier, but his kindness transcended words. I set the table for two while he prepared the food in the kitchen. I waited seated at the table, patting myself in the back over the well-decorated set up I had made. Candles and napkins and silverware. The ultimate winter cozies.

Lars brought the food out to the table and sat in front of me. We served ourselves and I was impressed by his cooking skills. The food was fantastic, and I didn't know how to show him my gratitude, as usual.

There was mostly silence until he suddenly spat out: "Why?" . He could say a few words in English, but not much more than that, and let's just say that my Norwegian was nowhere near my mother's.

"Hmm..." He pointed at his eyes and then up to the ceiling. I quickly got the message. I thought I would be able to avoid having this conversation with him, but no, right on the last night, after having failed at my mission once again.

"Why do I want to see the lights?" I asked politely. He shook his head in agreement. I hesitated to start. I was fighting not to tear up, but fighting it just made it worse. I had been alone for two weeks, waiting for those lights, waiting to complete my duty as a daughter.

I stood up and brought him a blue vase with mother’s ashes. I told him "mamma min" and pointed at the large jar. "She loved the lights and used to come here sometimes to enjoy the peaceful silence of winter."

I don't know if Lars could understand what I was telling him, but I got carried away and kept on talking. I needed to speak.

"She died a couple of years ago and her wish was to have her ashes thrown in the snow. In a forest up north under the Northern lights. I’ve tried to do it before, but they just won't come, they just won't show up, like I’m stuck with a pending task - forever."

I was bawling at this point, sobbing. I had been carrying that weight on my back for years. And now, I had once again failed. Another winter wasted. Until Lars stood up from his chair and walked around the table to hug me. He pointed at the window, and I saw the shades of green and purple flooding the dark sky.

call her a pseudonym or a catfish, but she'll persist in her pursuit of fabulousness

More stories from Ms. Rodwell and writers in Fiction and other communities.