But belonging in none 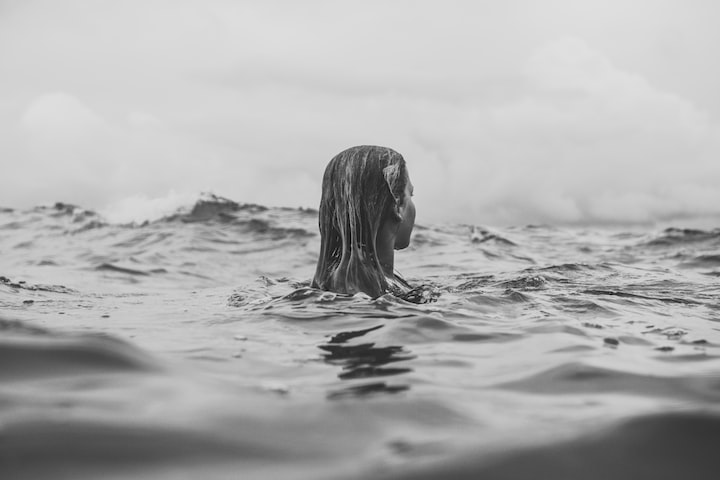 Photo by Jana Sabeth on Unsplash

Five fingers pressed against the glass, connected by webbing sure but still discernable as human.

I tried to remember what it was like before but all I could recall was this tank. This life of captivity and experimentation.

A life I chose.

It started slowly, or at least it seemed that way to us. One of our younger ones, equipped with delusions of Little Mermaid grandeur, decided to take a jaunt on land. We're all warned about the surface from a young age but the hubris of youth truly knows no bounds. Naturally, she was seen as she slipped back into the water, having already drawn attention during her time on legs. It's not as easy to walk as you might think and humans are far more observant than they're given credit for.

After that, even their phones and computers and various other forms of technology could not distract them from finding us. First, there was the over fishing. They wanted to starve us, wanted to draw us to the surface as food became more and more scarce. I don't know how many were captured in those first few months or how long it truly lasted but I do know that watching those I loved being dragged away in nets is an image I'll not soon forget. We went deeper, scavenging what we could though it was barely enough to get by. Several more of us didn't make it through. Families were torn apart by hunger or capture, every colony living in fear and despair. Fighting began between us as we embraced our more primal instincts thanks to the empty bellies and helplessness of our situation.

Then came the sonic cannons.

Previously used as a means to map the ocean floor for oil, the humans brought them in to drive those of us who continued to evade them out of hiding. More and more were being experimented on, the medical marvels that should (and could) have been a force of good becoming one of greed and power instead. Countries began to compete, wanting to make the most pertinent discoveries before anyone else. Wanting to use us to further their own selfish agendas. So they came at the ocean, already crippled from millenniums of abuse, with everything they had.

We had no choice but to surrender or risk becoming extinct.

Treaties were drawn up and signed, involving whatever countries most wanted the power to control us and what we could bring them. Deals were struck. Extortion, more like. Our colonies, our remaining people, were promised food and prosperity...for a price. Always a price. Despite being part human, we were nothing more than animals to them. Cattle. Property.

We were a new resource for them to drain.

So it went for years, the beautiful seas we'd always called home becoming more and more polluted. Dangerous. Fertility became nearly impossible thanks to increased chemicals and waste filling the waters from the increased experiments and manufacturing. To our credit, and our oceans', we managed to last longer than should have been possible. A sign of our strength, though it wasn't without a cost. Sacrifice. Loss.

Shaking myself out of my thoughts, memories of my own loss assaulted me. Amatus. Fitting that her name meant "beloved darling" since that is what she had been to me. While humans saw sharks as predators, they were more like companions to us. Partners. Not only did they protect the oceans, ensuring balance to life beneath the surface, they also protected us. Amatus had been all of that and so much more, not the least of which was one of the last of her kind if not the last. If I could cry, if the water surrounding me wouldn't swallow the tears as if they'd never been there at all, I knew I would. Thinking of her felt like a gaping hole was in my chest where my heart used to be. Humans had taken everything, even the best friend I had ever had. Beautiful creatures but a mere nuisance to humans. A novelty for their movies and propaganda.

Long before our discovery, those on land had polluted and disrespected the oceans that gave so much. It was this that led to the dwindling numbers of more than just sharks and it was this that had brought me here. I tried to summon the anger, the hatred, but all I felt was resignation. I could not let my people disappear as the sharks had.

This was our life now. This was the only way to carry on.

The people peering in at me through the thick glass might have shared certain characteristics with us but we were not the same. I blinked slowly as a child came close, lifting her hand to place her palm on the glass where mine had sat moments before. Despite everything, I couldn't find it in me to bare my teeth as I'd seen others do. Some part of me still hoped that humans were redeemable. There had to be some that did not agree with any of this. Those who did not see us as a sideshow attraction or something to exploit for pleasure or in the name of "science".

Flicking my tail so I can move closer, I place my palm over the child's. Mine is considerably larger and the nails make it seem more gruesome than I'm sure she was prepared for but the child doesn't pull away in fear. Instead, she smiles a small, shy, smile. Her whole face lights up, making her look every inch as pure and angelic as I like to think all children are. I can't help but smile back, forgetting for a moment where I am or how I got there. It's just me and her, a little girl seeing fantasy come to life. She doesn't yet know how cruel a place the world can be and I don't have it in me to show her.

In the next instant, a woman yanks the child back, shaking her head in disappointment. I can't hear her, of course, but the disgust on her face says enough. The derision. The fear. Defeated, I turn, flipping my tail in order to get as far away from the glass as possible. There's nowhere to hide, that would defeat the purpose of putting us on display, but I can at least move back from those who see me only as an animal.

Though many animals receive better treatment than they show us. At least that's one small comfort.

Plumes of red drifted down, resembling smoke as it wavered and danced in front of my face. I'd heard several humans discussing something called a genie once when I'd been allowed topside so they could clean the tank. They spoke as if it were something funny, not something real, but I always wondered. What would it be like if I could be granted a wish? What would I even wish for?

The answer came instantly, even as more of the red clouded the bright blue around me. Fear might have overwhelmed me if I'd had anything left to lose. Since I didn't, there was only a detached sense of curiosity as I looked up. A hand moved through the water, clearly coming from the surface, surrounded by a deeper red than what had filtered down to me. Its movements were frantic, making me wonder if one of the people in charge of feeding us had had an accident. The blood didn't seem to be coming from that hand, however.

Against my better judgment, I kicked my tail as hard as I could, propelling myself to the surface. Again, I had nothing to lose.

My head broke through the water, gills struggling to adjust as air filled my lungs instead of water. It was a surprisingly easy transition. All I remembered from my capture was a burning sensation as my body struggled with the difference between underwater and above. This seemed smoother, faster. Was this what it was like to change?

"Are you going to float there all day or do you want to get out of here?"

The voice startled me, not because it was unfamiliar (though it was) but because none of my captors had bothered to speak directly to me so far. My knowledge of their language was rudimentary at best but the look on his face communicated his intentions quite clearly. He was here to help.

"Free," I said, the word strange and my vocal chords struggling to produce it correctly. He smiled, the twinkle in his eye relaxing me despite the suddenness of this bizarre turn of events.

Trust was not something I had learned from the humans but I couldn't help but feel like I could trust him. Maybe it was foolish considering the dead man on the side of the pool, one of those in charge of feeding and caring for us, but I didn't have another choice. I took his hand, surprised when he didn't flinch. He didn't react at all, not even when the scales on my hands started to recede.

"Good. You learn fast." Pulling me from the water, I didn't have time to consider what would happen when I was on land. All that mattered was I was going to be free.

"Don't worry. I'll help you learn," he added, ignoring the way my form twisted and changed as he urged me forward on legs I was too stunned to process much less figure out how to use. He grinned conspiratorially as he glanced over his shoulder at me as we moved.