by Mark Gagnon 15 days ago in Short Story 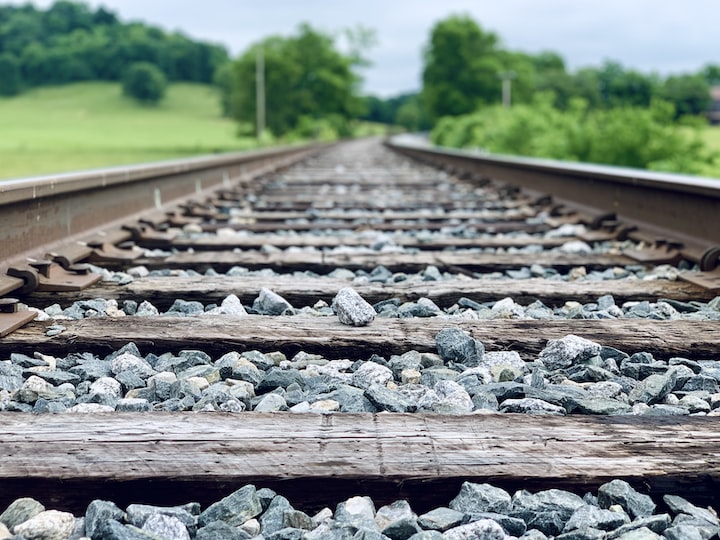 Photo by Tim Wildsmith on Unsplash

It is strange how the mind can play tricks. When I stare down the tracks I’m standing on, I could swear the left and right ribbons of steel join as one at the horizon. Of course, the logical part of my brain tells me such a thing is impossible, but could it be that just this once my eyes aren’t betraying me? Are the mathematical laws of the universe always unwavering? In my life, I have observed other constants abruptly evaporate, allowing random chaos to rule, so why shouldn’t parallel lines meet somewhere in the distance?

The house my parents rented when I was a pre-teen had a set of tracks running past the backyard. I would often finish my morning chores and walk the tracks for what felt like miles. In those days, children could explore their corner of the world as long as they were back before supper. The era of helicopter parents had not yet emerged. I walked on the right side when leaving my yard, striding from tie to tie or balancing on the rail itself, and repeated the process on the left side to return home. Occasionally, I would stop and place a hand or ear to the rail, trying to detect the slightest vibration, which told me a train would pass soon.

Once in a while, I would dig up some worms and take them and my fishing pole with me to a stream that meandered near the tracks and catch hornpout or an infrequent brook trout. There were no other children living in the area, so my imagination became my best friend. We had grand adventures as we traveled along the steel road, fending off swamp creatures and discovering structures from lost civilizations—which in reality were piles of used railroad ties and an abandoned water tower.

One day, while returning home on the left side of the track, I saw a man walking along the right side. He was unwashed and unshaven, clothes stained and riddled with holes and tears. My first reaction was to run and hide in the tall grass until he passed, but I steadied my nerves, summoned my courage, and marched forward, one hand in my right pocket clutching my jackknife, thumb positioned to push open the blade, the other hand carrying my fishing pole.

As we drew closer, our eyes met, and he nodded his head in greeting. I could tell this bedraggled old man meant me no harm. I released my knife, unlatched my stringer of freshly caught fish from my belt loop, and stepped across our parallel paths to his side. With an outstretched arm, I offered the stringer to him, explaining that I had all I needed at home and thought he might like some fresh fish for dinner. He told me he could not pay. I responded by telling him they were free for the catching in the creek by the tracks and no payment was required. He smiled, took the fish, and thanked me. We each continued on our way, him on the right, me on the left; our parallel paths once again re-established.

I had forgotten about this encounter until today. Standing on this section of track, watching a group of boys gathering in the field up ahead, I wondered if any of them would experience a time when parallel lines would merge.

Everyone spends their days traveling parallel paths with those around us. We acknowledge their presence but continue on with no actual connection to the ones passing by. It’s only when someone attempts to merge the lines, even for a moment, can we actually make a difference.

Read next: Finding Love and Happiness Under a Rainbow Night