by jason grace 2 months ago in Short Story
Report Story 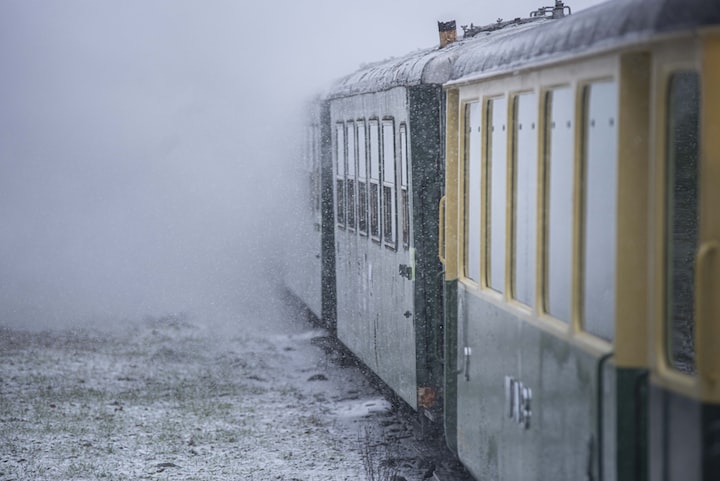 Photo by Larisa Birta on Unsplash

Jon’s mind slowly inched its way out of the fog, though it was hypnotized by the rhythm that pleasantly urged him back to unconsciousness.

A moment of realization and confusion caused his waking, springing up from the seat.

“What the hell?” He looked at his surroundings which consisted of a long seat upon which he had been sleeping, a small table that could be folded into the wall, a small sink and toilet, and a window. Outside a bleak landscape of leafless trees, brown grass, and the occasional derelict building under a gray sky, racing away.

His brain slowly started to process the scene. “A train? How the fuck did I get on a train?” The last thing he remembered was sitting in the Crow Bar drinking with Schaefer celebrating a “business” deal done right. Schaefer was so pleased he kept buying all the drinks, and they smelled very sweet…

“That son of a bitch”, Jon grumbled as he checked his belongings, of which he had none. Not even a ticket to get on board the train. Even his clothes were gone, replaced with what resembled a hospital smock. On increasingly steady legs, he stood and went to the door, which was unlocked. He peered out, looking both ways up and down the aisle. Nothing.

As he stepped out into the aisle he could see more doors to cabins just like the one in which he woke, but nothing to mark or distinguish them, no numbers, no letters, no markings of any kind, everything painted in an even dull white. There were overhead lights that flickered in an uneven way, and the aisle was carpeted, but nothing else of note could be found. Jon decided to head in the direction of the head of the train. “Should be a meal car or something where I can find out where the hell I’m going”, he thought.

He journeyed to the next car, but found the same thing. Not even an indicator of car number or anything of the sort. Just more undesignated cabins, flickering lights, and dull white. He decided to knock on one of the cabin doors, yet there was no response. He then knocked on all of the doors and shouted to anyone who might be therein, but still nothing. His mind was a mix of frustration, anger, and a little fear.

Finally, at the fifth car, he found another human being, dressed in the same smock.

“Excuse me, but do you know where this train is headed?” Jon asked in a cautious manner. The small scrawny man turned his head toward the noise, showing a haggard face and red eyes.

Jon looked at him quizzically, unsure whether he was drunk, stoned, or otherwise addled.

“What do you mean it’s going nowhere?”

“I mean nowhere, it never-“

“Good morning passengers. Breakfast will be served in the dining car in approximately five minutes. Please make your way in an orderly fashion.”

“Time to eat, man”, said the scrawny man as he went toward the front. Some cabin doors opened, and from inside other passengers emerged, all wearing the smocks, and slowly made their way to the dining car. None seemed in a mood to talk, so Jon just followed the throng.

After another two cars, Jon found the dining car, and the other passengers quietly sat down at the tables in an orderly fashion, which were already supplied with trays of food. Warily, Jon sat down to eat. It was standard breakfast fare; eggs, bacon, toast, and juice, not the best breakfast of all time but by no means the worst. The other passengers ate their breakfast in complete silence, many at the same pace. After about thirty minutes, the PA blared:

“Breakfast is now over. We hope you enjoyed your meal. Please vacate the dining car. Please enjoy the rest of your day.”

The passengers all got up and left the car. Jon decided to go in the direction of the engine, hoping for some answers. After entering the second car, he realized he was not alone. He turned to confront his follower.

“So, what are you in for?” asked a smiling, broad-shouldered man.

“Jon. I still don’t know what you mean.”

“Ah, still a little foggy, eh? It happens to everyone at first. Welcome to the prison train to nowhere.”

Jon stared at Franco in disbelief. “Prison train? What? I don’t get it.”

Franco giggled. “What’s there to get? We are all prisoners on this train. We all just woke up in our cabins, and here we are. We reckon we all pissed someone off. In my case, I fucked the wrong girl. Her daddy was a bigshot, so here I am. Who did you piss off?”

Stunned into silence, Jon held his head, trying to make sense of everything. “What about guards, why haven’t I seen anyone of authority?”

“There aren’t any, at least none that I’ve seen. The speakers call for mealtimes, and the dining car is closed and locked between meals, but that’s about it.”

“What happens if you stay in the meal car after the meal?”

“It gets a little uncomfortable, they play a low hum that makes you sick. You’ll do anything to leave then.”

“How does the food get on board if we never stop?”

“Hell if I know. All I really know is that we’ve all really pissed someone off, and we’re all trapped, and the train never stops.”

“But somebody has to be running this thing…what about the engineer?”

Franco grinned. “I guess you’ll have to find out for yourself. We all did. Have fun.” He waved, smiled, and ducked into a cabin.

Jon raised his hands in frustration, dropped them in disgust, and shook his head. “Fuck it, I’m heading to the engine.”

After travelling through another five cars, Jon decided to sit and gather his thoughts. He knocked on a cabin, and, not hearing an answer, opened it, and found it empty. He looked out the window and saw barren trees, brown grass, and derelict buildings. “Not exactly the scenic tour, huh.” He tried to open the window but couldn’t figure out how; no latches, no levers, no knobs. He next tried knocking on the window; plexiglass, it’s not going anywhere. He stood up, went to the sink to splash his face, and went out of the door to resume his journey.

Entering the next car Jon came upon quite the commotion: two passengers were engaged in hand-to-hand combat. They clinched and grappled violently, smashing each other against the walls, until one was able to break free with a series of knees, and dropped the other with a vicious hook, splattering the dull white walls with crimson. The now dominant fighter continued to rain down punches on his foe, and then pressed his thumbs against the downed man’s eyes. Briefly, he looked up at Jon.

“This don’t involve you.”

Jon put his hands forward, almost backing away. “Hey, you’re right, none of my business.”

The man snorted, grabbed his victim, and pulled him into a cabin, slamming the door. Gurgled screams followed. Jon rushed passed the room, pausing to think that at least the blood provided some much-needed color to the place.

After another two cars, the PA came on again:

“Attention, passengers. Lunch will be served in the dining car in approximately five minutes. Please make your way in an orderly fashion.”

Again, as with breakfast, some of the cabins opened, and their occupants made their way forward toward the head of the train. “How many dining cars does this thing have?” Jon thought as he once again follows the herd to a lunch served the same way as breakfast, only this time the offering was a turkey sandwich, chips, a fruit salad, and a soda. Once again, not the best, but not the worst. After thirty minutes of eating in silence, the PA blared:

“Lunch is now over. We hope you enjoyed your meal. Please vacate the dining car. Enjoy the rest of your day.”

Jon watched as the other passengers quietly got up and left the car, but he decided to test the words of Franco. Soon, Jon was the only one left. Very quickly, he could feel a vibration, a hum, which made him increasingly uncomfortable, increasing to the point of pain and illness, which forced him out of the car. He staggered out toward the head of the train.

Eventually he regained his composure and continued on his way. The same types of colorless cars. He opened the door to some of the cabins; some were occupied, and their inhabitants were either completely disinterested or outright hostile to Jon. Either way, he didn’t overstay his welcome. On he went to the head of the train. “I’ve got to be at the engine soon; how long is this bastard?”

He lost count of the number of cars he went through. They all looked the same. Until he entered one with a distinguishing feature. Bloodstains. “No way, it can’t be”, he thought. The same place as the fight. He noticed the cabin door where the blood trailed was ajar, and he slowly opened it to find a still twitching and gurgling mass of gore missing its eyes. He ran further toward the head of the train until he found a car he could not enter.

The door was locked. “This is new, at least.” He tried to force it open, but it wouldn’t budge. He knocked and yelled, but there was no reply. He couldn’t sense anything happening inside. As Jon was contemplating his next action, the PA came alive:

“Attention, passengers. Dinner will be served in approximately five minutes. Please make your way to the dining car in an orderly fashion.”

At that point, the door unlocked and opened to reveal the dining car. Jon entered with the other passengers and seated himself at a table which offered spaghetti, meatballs, bread, a salad, frozen yogurt, and a soda. Not the best, not the worst. After thirty minutes, again the PA sounded:

“Dinner is now over. We hope you enjoyed your meal. Please vacate the dining car. Have a pleasant evening.”

The passengers all got up and left, and Jon was smart enough to join them, again going toward the head of the train. He went another two cars and saw a familiar face.

“How goes the quest, oh Jon the adventurer?” grinned Franco.

“How the hell did you get up here?”

“Oh, come now, you can’t go mad yet. It usually takes a couple of days for that. I was hoping you were made of sterner stuff.”

“This can’t be happening…”

Jon staggered into an open cabin and collapsed on the seat, then curled into a fetal position.

Jon lay near catatonic on the seat for seemingly hours, time ceasing to have much meaning, when the PA came on again:

“Attention, passengers. Light’s out will be in approximately five minutes. We wish you a pleasant sleep.”

Jon almost ignored the message, except he began to smell something sweet. He popped his head up to identify the aroma. He could not place it-

Jon’s mind slowly inched its way out of the fog, though it was hypnotized by the rhythm that pleasantly urged him back to unconsciousness.

Jon woke up in a haze. The same way he has for an unknown number of days. It will be time for breakfast soon. Another day on the train.

More stories from jason grace and writers in Fiction and other communities.