by Amy Christie 11 days ago in Sci Fi
Report Story 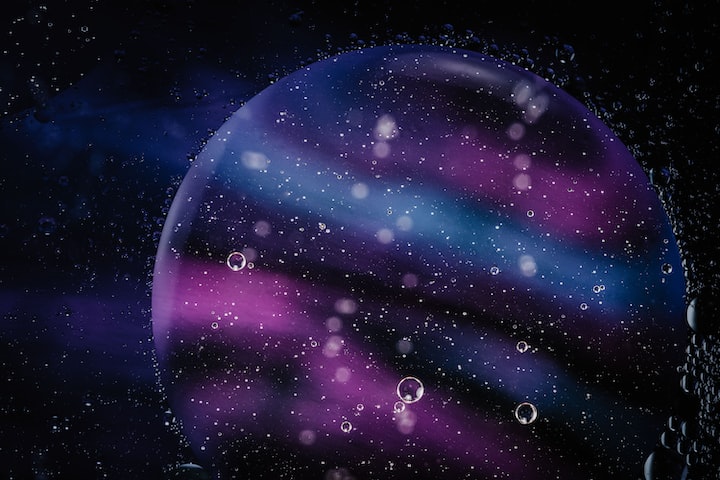 Nobody can hear a scream in the vacuum of space, or so they say. Trapped in this dungeon for 1105 years, sealed from another voice for millions of seconds... At the edge of these walls, echoes murmur in the vacuum, yet none can reach us.

Once in a hundred years, we get our voice for one minute. We scream or try to laugh. It comes out as wails or deranged cackles. None can know about us... and we can't tell. The vacuum is our prison... and deliverance.

Inside these transparent walls, lives have been spent in despairing hope. Songs about love and home were heard. None lived to go back and feel them. Or see them. Once you get here, your fate is sealed.

The ships bring new prisoners every three months. Their crimes are against the galaxy rulers. Trying to see beyond their given planet.

Singing into the ether, realizing there's more to dust than a way to travel. Inside those particles, there is a secret to how we came to be. Yet, none would have the other know.

Silenced as soon as they try to research, all who dive into dust mysteries end up here. Screaming, begging, wishing they could have their life back. To live it blindly but close to their loved ones.

Trying to breach these walls takes your voice permanently.

The dungeon is the only protection against the vacuum sucking all sounds and the beings uttering them. It moves; it breathes around us. It knows no mercy, no delay, or break.

Night and day, ever alert, the slightest sound is followed by a thundering din—the echo of death.

Life as we used to know it ended before I came here.

The last songs disappeared as soon as the Earth was shattered into the void. Music flickers in my memories. Distant dreams of what I lived thousands of years ago. We're nearly immortal now. We don't fear blades or any attack.

Knowledge is what sets us apart. And who keeps the secrets.

We came down in twilight, landed on Earth while trying to find the next galaxy. They rushed on seeing us, tiny weapons, and a rustle of voices in the air. It all lasted less than a day. And then, we set out to find the core.

Earth was not ours; we conquered it. Something resisted the pull, though. Its very essence emerged away from us; we couldn't grasp the secrets lying in the soil.

Dust samples whispered, but we couldn't find the words.

Until one day, we breached a cave in the center. Lava spewed out in the beginning. We couldn't get burned. Our skins were scorched since the first disaster took over. This time, we waited it out.

Toxic fumes, a rain of ash... and then it got quiet. We sent two humans in... none came out. We gathered samples and tasted that dust. Different... louder... almost awake.

Earth was holding something back. I felt it in my bones; I could almost fly after one dose only. Was it their Maker or something else at work?

And then the wave came

Our sensors did nothing to alert us. One ocean wave came crashing inside, then all particles of dust glimmered. Radiation gushed in a giant ray, covering all the planet.

As we took off on the last ship, Earth became a memory. For those who ever stepped on it.

And life went on just as usual for a while.

Or that's what I thought. The discoveries we made there were not spoken of. We sent our report, and no questions came. I took a dust sample to my laboratory and tried to find a way to make it speak.

Then, one night, the shield around my house was dissolved by ships orbiting, patrolling. Tentacles grabbed me, and this dungeon greeted me when I woke up.

The Earth dust is with me even now. I didn't let anyone in on that task. And every year, it grows louder. Its secrets are close to coming out.

Or have we known all along?

During the first days, I kept trying to prove my innocence... to find out what I had done. I never got an explanation or an end to this doom. All my companions for the Earth expedition were brought here.

They lingered for a few years and slowly expired. Their wails still sound in my ears even now.

The vacuum entered their cells, and they couldn't keep quiet. Their voices are now part of the Great Chaos. And it keeps growing each day. It adds souls from all galaxies until it can finally take shape.

Some say it will be a new beginning.

I feel it will be the end. Of all things as we know them. And Earth dust is the way it started. We should never have landed there or touched the planet. The radiation blast spread the dust through the galaxies. There's no being that hasn't breathed it in.

And this sample I have tells me I'm right. I've changed during my imprisonment. The vacuum hasn't touched me, but that's the only blessing I got.

My face is different; I walk lower. I crawl most of the time. I've shunned mirrors for 500 years.

Dust added arms, legs, and a snake tongue. Trying to talk brings slithering sounds. I can't speak the way I used to. Or sing.

Not that I would if I could. Singing is a deadly call here. The vacuum sucks out all music in an instant. It feeds incessantly, and only screams go neglected.

This dust made me live much longer than those who convicted me. My very existence is probably forgotten. But I'm closer every day. To find a way out and the road into the vacuum toward the sound.

I'm not beaten. No one will recognize me when I come... none, but I know what took place on Earth. Everyone who could tell had their tongue cut, or soul vacuumed long ago.

And yet, this secret will give me this galaxy. And the next. I will be the new Maker!

Tonight, I go on crawling to the edge of my cell. The lock isn't as steady, and a new song started. Not mine, not the void's.