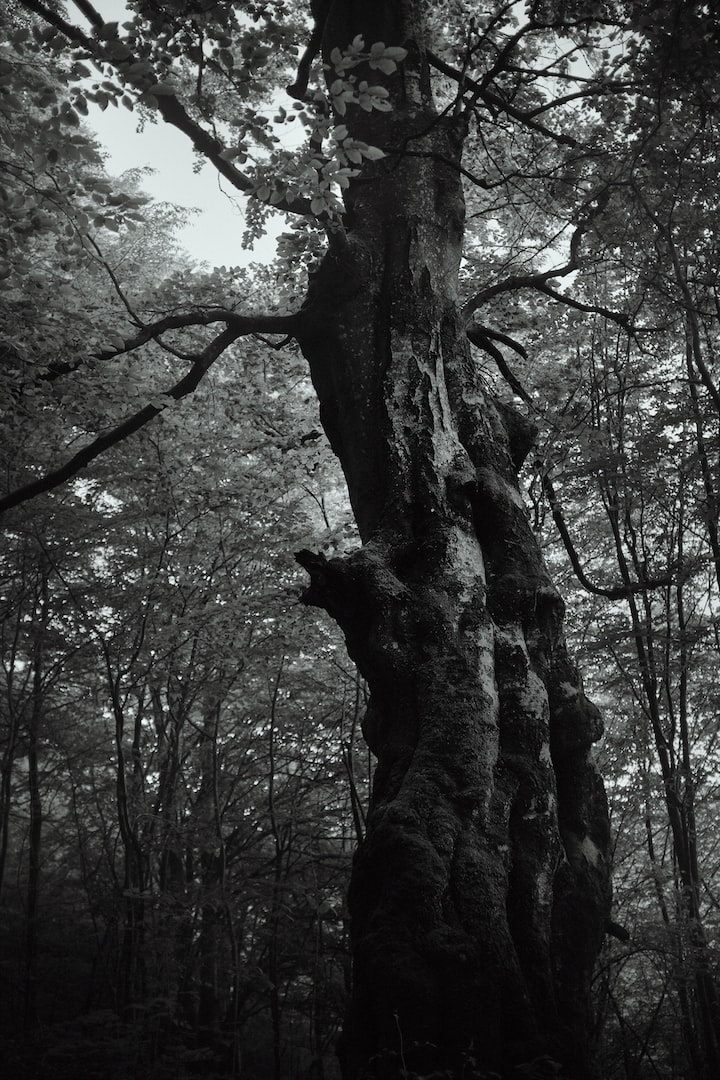 Photo by Peter Oslanec on Unsplash

I stand tall, reaching toward the sun. A cool autumn breeze stirs the remaining leaves on my branches. Most are now brown and fallen. The cycle of the year. I have seen it come and go so many times I have lost count.

I am ancient. My bark is thick, my branches twisting. I existed long before the ancestors of the hikers who visit my forest ever arrived here.

I am so very old. I fear more years stretch behind me than before me now.

My limbs creak in the wind as another group of hikers arrives. They rest under my shade, sip from their water bottles. They speak reverently of my size, my age. Old growth, one of them calls me. They are not wrong.

They take pictures then leave. They are respectful. They do no harm. I let them go.

The sun comes, the sun goes. The moon rises, the moon sets. I watch it all, a silent sentry. Days meld with each other, years too. Decades slip into centuries into millennia. Time feels endless. It can be, for those that know how to survive.

Another group of hikers arrives. They sit beneath my nearly bare branches. The weak autumn sun leaks through.

“How much lumber do you think a tree that big would make?” one of them asks as they refresh themselves with food and water.

“Don’t know,” says another. “But that thing’s gotta be a gold mine.”

They move on. No pictures, no reverence. But they leave nothing behind. Others have been less considerate. Others have done worse.

I know what he will do as soon as I see him approach.

A lone hiker out for a jaunt through my woods. His backpack bounces on his shoulders as he moves. He has an air about him, an aura I can sense. There are those I can tell will be trouble. They see the world as theirs, to do with as they please.

And so I shall do as I please.

He rests beneath my branches, back against my trunk. He sweats heavily, skin damp. I can see clouds in the distance, a storm slowly brewing. It will wash away his scent, his residue.

He drinks from his water bottle. He opens a wrapped snack. He discards the plastic among the leaves at my roots.

The wrapping will get lost. I will feel it as debris buries it in the ground. My roots will grow around it, but it will remain, not giving itself to the cycle of life like leaves do, not rotting, never disappearing. It shall remain, a thorn I shall always feel.

After his rest, the hiker stands. He looks up and up to the top of my branches, assessing me. He grins, a grin I do not trust.

He fishes something out of his pack.

He flicks it open with a jerk of his hand then approaches my trunk. I feel it as he carves something into my bark, my skin. Two letters. His initials, I assume. Others have done the same. They want to mark, to maim. To own what they think is their right to own.

He drops the knife on top of his bag to inspect his work. Blows bits of bark away from it. Runs a hand over his own name.

I can feel his confusion when his hand cannot pull away.

I can feel the panic, the rapid beat of his heart.

I hear the screams as I pull him inside, enveloping him. His voice becomes muffled, then silent. As silent as I am.

His initials fade as I heal. My branches inch higher toward the sky. The sun comes, the sun goes. The moon rises, the moon sets. Days, years, centuries slip by.