by Dean Gee 2 months ago in Adventure

The most dangerous sharks are on land 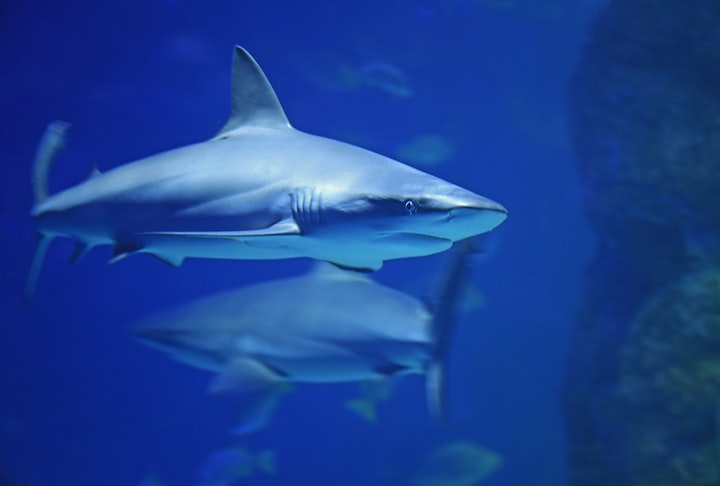 The spotless black sheen from the vehicle glistened in the sunlight as it stopped, with a tiny screeching of the tyres. The Jaguar driver jumped out and ran around to the back door to open for the guest.

“Morning Sir, I hope you had a good drive?” said the young man, standing nearby awaiting the guest.

The elderly man in his white long sleeved and starched collared got out of the car and hobbled to an upright position. He wore black suit pants and he stroked his thick salt and pepper moustache, as he looked at the large yacht that would take them to their destination.

He turned to the eager youngster who had welcomed him.

“Umm, sorry Professor, thanks for the clarification. I take it you have been out to sea before?”

The youngster grabbed his heavy bags and they walked toward the boarding ramp for the sea vessel.

“Young man I was out at sea when you were but a twinkle in your mother’s eye. So, this is the vessel, and where is my cabin? I am assuming I do have my own cabin as I clearly requested? And I smoke a pipe, so you’ll all have to deal with that!”

“That’s no problem sir, um I mean Professor. I am very excited about the papers you have published, showing that sharks are not the bad guys everyone makes them out to be. I particularly like that you mentioned that we better protect our sharks and our oceans if we want to continue to enjoy them.”

“Oh, so you read two of my published articles, did you? Which was most impactful? The plastic pollution one or the jellyfish horror one?”

“Both Professor, they were both scary scenarios, you see, I love to surf and sharks are not my favourite creatures, but if the ocean had no sharks, we would be inundated with jellyfish. Well, that’s the gist of the article on the horror of jelly fish.”

“Quite right young man, now, what did you say your name was?”

“Oh, I didn’t. My name is James, but my friends in the surf lifesaving club call me ‘Spud,’ I answer to any of those, and a few others too.”

“Okay then Spud, where is my cabin?”

“This way Professor, follow me, will you be ok with your leg? I mean on the ramp?”

“Oh yes young man, I lost that leg long ago and thanks to modern technology this tungsten and steel one has served me well. Sure, I might hobble a little, but I can access most anywhere I like. I used to do some deep-sea diving, and I was a marathon runner too I’ll have you know, but after the accident, well. That was a long time ago.” He had a vacant look on his face.

“Sorry Professor, I didn’t mean to bring up unhappy memories.”

“No Spud, it’s quite alright, I was Olympic standard for marathon running, I’ll have you know. You would never say so looking at me now, marathons were my first and only love. The accident took that away from me and changed my life. I will never forgive the perpetrator that did this to me. Never.”

“Sorry professor, about your life that could have been. On the upside, you are successful in your own right.”

“It’s an expression of agreement with the obvious.”

The professor cautiously made his way to his cabin, now and then stopping to stabilize himself, letting out a grunt of disapproval at the vessel’s movement as the waves licked the side of the yacht, causing it to move.

The yacht was large, and had 3 cabins, one communal cabin, and the other two were for the captain of the vessel and the honoured guest, in this case Professor Coventry.

The communal cabin housed three men, all members of the surf lifesaving club. They would drop anchor just behind the shark nets for the two evenings that they would be out in the ocean.

The following day they would travel along the shark nets and assess the sharks caught in the nets, removing the dead sharks from the nets and releasing any sharks that were still alive.

That night aboard the vessel, the men were in high spirits and Spud was sure that the copious amounts of rum and other alcoholic beverages that were being consumed, had a lot to do with it. There was rap music blaring in the background. Amongst the crew, Professor Coventry already had a nickname, he was called ‘knot’ because they had all felt the wrath of his elitist tongue in some form or other, so ‘knot’ was short for ‘knickers in a knot.’

Professor ‘knot’ never joined the men for dinner, preferring to remain in his cabin. He had specially prepared food delivered to the vessel by a catering boat that evening, and he did not eat what the rest of the crew were eating.

The professor and the captain had their own private dinner party enjoying the food that the professor had received. The professor told the captain of the yacht, about his love for the ocean creatures particularly sharks, which he said were close to his heart.

“Lesley, the scum that I am at sea with drink rum and listen to rap music. They are young and stupid, and little do they know what I have planned. It is hilarious to see them sucking up to me, one even said he read my papers, as if I need his approval….. What? No, they won’t suspect a thing. We will be back the day after tomorrow and it will be done, they will be none the wiser, what’s that? …..Oh, not to worry, I’ll just blame it on climate change, you know, the usual…..”

Spud started feeling rather ill at that stage and so had to get up onto the deck and launch his liquified supper over the side of the vessel, which he did magnificently. After that he felt a lot better and seemed to sober up somewhat too.

The next morning, Spud awoke with a start, remembering his friend Bradley who was at school with him, was studying marine biology at Oxford. After breakfast, which for most of the crew was just a bottle of still water as they nursed their hangovers, Spud phoned Bradley, his friend at Oxford.

The captain spoke to everyone.

“Gentlemen it is not often that we are graced with such an amazing intellect as we have here today. It is an honour for me to observe the amazing work that Professor Coventry will do today and I believe we should all feel privileged to witness this. Securing the future of our oceans and the shark population.”

“Thank you, Captain Mc Cormack, all of your names will be in the history books as part of the pilot expedition that will change the lives of so many sea creatures and just as importantly, the people of the world because of what I am about to do here today. You can all be proud.”

Spud moved closer to watch the professor. He most certainly seemed star struck by the Oxford Academic.

“Young men. I am here to protect the sharks and ensure that they increase in number. Be careful with those that are alive. I would like to inject them please. This will ensure that they breed a lot faster.” He said waving a syringe and a needle around.

The first of the living sharks that was trapped and now released from the nets, was ready. As the professor leant forward to inject the first shark, to be released back into the ocean, Spud shouted ‘no’ and bumped him. The professor dropped the syringe and needle. Spud’s reflexes were fast and he caught the syringe before it fell over the side of the yacht.

“I can’t have that poison entering the ocean.” said Spud. Everyone stood in a stunned silence until the professor regained his posture.

“What are you doing you idiot!” an irate professor shouted as everyone watched on.

“What! You won’t let me save our sharks and our oceans? Is it because you are a surfer and hate sharks? That’s it isn’t it? I knew I couldn’t trust you!”

“Now, now professor, you and I both know that is not true.”

“Then why didn’t you let me inject the shark?”

Spud spoke to all of the crew, who were still surprised standing there stunned.

“Gentlemen, Prof Knot over here is a shark hater. You see a shark took his leg when he was a young man with a promising marathon and athletics career. From that day forward, after that diving accident, he vowed to destroy the shark population.”

“What are you crazy? You foolish young imbecile, I have written so many papers on the need for healthy shark populations. I am trying to increase their breeding capabilities, you moron!”

“The perfect cover for your little eradication injection. Guys, the prof here, has formulated a deadly contagious disease, and that is what he was going to inject into the sharks we release, the disease will rip through the shark population like a contagious cancer.”

“Professor I couldn’t sleep after all our drinking, so I stole one of your vials in the early hours of the morning, and contacted my friend at Oxford. He is one of your students and he confirmed that the serum you are using is lethal to sharks. I read the chemical makeup to him over the phone.”

A siren broke the stunned silence as the coast guard speed boat came closer to the yacht.

“Here they come professor, you can explain to the coast guard. You see some of us ‘scum’ are a lot wiser than you think.”

Professor Coventry now spends his time in prison, moaning to Lesley about his living conditions and the lack of respect that the prison population has for men of intellect like him.

Spud was a local and national hero and still works as a life guard. Protecting all lives in danger, because that’s what lifeguards do.