Now We Are Free 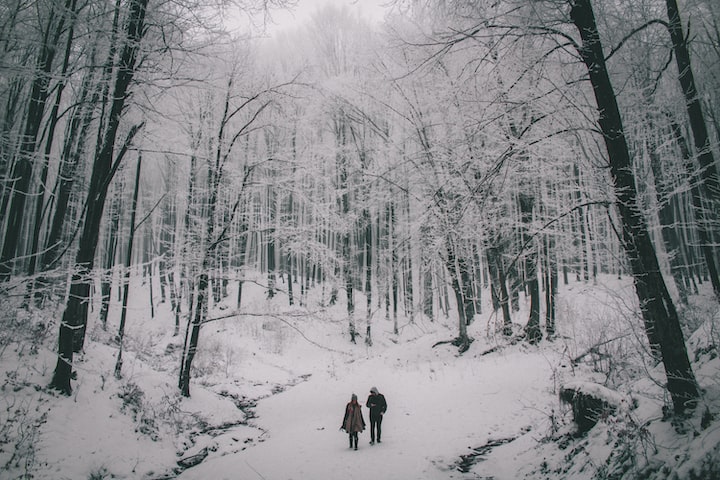 Photo by Fineas Anton on Unsplash

We drove up the snowy, winding road towards the cozy A-frame cabin. As new immigrants in the United States of America from a small island where the season is always spring, we were eager to experience snow for the first time. Our introduction to snow was about an hour before we made it to the cabin as we started to climb the mountain with our rental car. The terrain was not new as we searched for images of such terrains on the internet and also obsessively looked at the photos of the Airbnb link the host uploaded. We pulled to the side of the road, excitedly ran out of the car. I wanted to touch the snow but he wanted to taste it. So he let his tongue out with his head held high up towards the sky waiting for a snowflake to drop as I went straight into the ground and in a rush grabbed some snow. Of course it was cold, and he said the snow was tasteless, but we still wanted to live our movie magic moment. It was magical at first, but then it was cold and all bubbly and giggly we ran back to our car. We were surprised that none of us slipped as we ran in the mush and the snow.

As we made our way to the cabin, we were filled with excitement, anticipation and relief. The sun was almost gone but the blue hour was perfect. The road was slippery and it was our first time driving ever in snow. It was scary going up the narrow mountain road. When we arrived, we were greeted by a stunning view of surrounding snow-covered mountains. We quickly settled in and started a fire in the fireplace. He wanted to explore the outside and I wanted to be inside looking outside. We had saved up enough money to rent this cabin in the mountains through several day and night jobs, interchangeably among us. I waited tables, worked as a barista and as a nanny. He worked as a pool cleaner and a food delivery driver. We didn’t have any savings, but we wanted to celebrate being accepted into a new country and planned to spend this weekend exploring the snowy landscape and making memories together. We would eat delicious food and wine as we would take a lot of photos on the polaroid camera we found at the thrift store on our block. We would hug tight at night and make love if we felt like it. Maybe we would dance during the day to our favorite hip hop songs so we even packed a wireless speaker. I also packed a ton of easy-made hot chocolate packets. Things we read in books and watched on the TV, all things cabin related, we wanted to do and tried to prepare for it. We were trying to make up for almost a lifetime after all.

But just as we were getting comfortable, disaster struck. The electricity went out, and the cabin was plunged into a grayness which soon we knew would be darkness as the night was near. Though, thankfully the fireplace was still on, barely, but there. This, we didn’t anticipate for. We had never been in a situation like this before, and we didn't know what to do.

We quickly realized that we would have to rely on each other to survive the night as everything in the cabin worked with electricity and we didn’t know how to function without it. It was a modern cabin afterall. We huddled together under blankets and lit a candle, using its dim light to see by. To keep ourselves warm and entertained, we told each other stories that we were told as children on the island. We both agreed that since our stories took place in the sun, they were less frightening than the stories that children grew up listening to in snowy mountains. Or maybe the sun scared them because they were used to the cold. We then talked about our families and friends, and about our dreams for the future. Oh how we missed them and home, but we oh nice it was to have an opportunity here, to grow and to grow older together.

As the hours passed, the candle grew smaller and smaller, but our spirits remained high. On our third box of cheap store bought wine, we realized we forgot to feed the fireplace and it was already out. We laughed and joked with each other, and even sang songs to pass the time. My singing had never been pleasant, but he was patient and drunk enough to sing along. Our harmony was soothing and wholesome. And finally, as the first light of dawn began to peek through the windows, we fell asleep in each other's arms.

The next morning, we woke up to find that the electricity had been restored. We quickly turned on the heat and made ourselves breakfast, grateful to be alive and well. I was still craving hot chocolate so I made some for me and a black drip coffee for him. And as our second day progressed, we spent our time outside in the snow, building snowmen and having snowball fights like how we always dreamed of. We found a sled in our cabin and we even took it down the mountain, laughing and screaming with joy as we fell pretty badly and almost broke some bones.

In the end, our trip to the mountains was an adventure we would never forget. It wasn’t unique but it was special. We had survived a night without heat, and had learned that, together, we could overcome any obstacle big or small. Electricity went out often on the island and sometimes we would get a breeze. But, this trip was a celebration. And as we made our way back down the mountain, we realized we both had a smile on our faces, it was subtle. Finally, we knew we were free and so we breathed in some more of that cool mountain air.

More stories from Arsal Asal and writers in Fiction and other communities.