Not Our First Rodeo

by Isa Smith 6 months ago in Short Story
Report Story

Paul gives me a look of exhilaration. I feel thumblike. 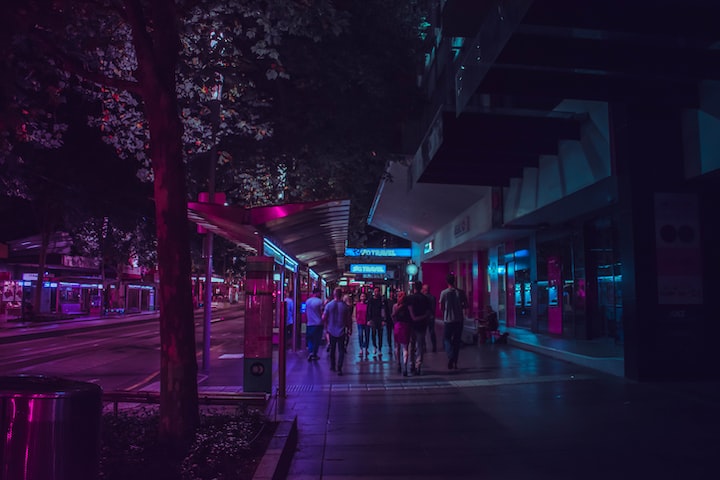 ‘How was that yoga the other day?’ Paul says. He’s standing as if he’s carrying a rolled up carpet under each arm. Invisible Bulk Syndrome, I call it. Paul hasn't broken a sweat in a decade, since he retired from our rugby club citing a finger injury.

We are queuing to be admitted into a bar that Paul assures me is very cheap and loose. The three girls ahead of us wear trainers and stretchy little dresses that make their arses look bouncy. The one in the purple dress keeps losing her footing every few minutes and bashing into me, for which her friends apologise.

Sorry Adrian, they say. Sorry Nigel! Sorry Benedict! - a new name each bash. And then they giggle into each other’s necks, cigarettes extended nobly like lances far over one another’s shoulders. I don’t get the joke, but they’ve been looking at my arms, so I let it slide.

‘The yoga was moronic.’ I say to Paul. ‘Utterly woo-woo.’

‘I just go for the leggings.’ Paul says.

‘Average age was about sixty.’

‘Oh.’ Paul says. ‘Awful.’ He’s looking at the rear of the girl in the orange dress, shifting foot to foot, gently palming his spiked up, slate coloured hair.

‘Saying that,’ he says, grinning. ‘We’re pushing the average age of this queue up a good few years ourselves.’

The queue shuffles forward and now we abut a wall of shiny black faux-marble. I inspect myself in sideways glances. The jeans are fine and the outline of my trunk is acceptable; the paunch dresses well, especially in this shirt Jolie bought me. My porkflesh scalp and stout neck look vulgar though, almost genital behind the girls with their barbie doll faces and perfumed moundy bodies. Paul looks like an old scrubbing brush in a pressed shirt and boat shoes.

We reach the front of the queue where the doormen ignore us officiously for some time before smirking and asking for ID. Some kind of sick joke, presumably. We flap around with our wallets. They nod at our driving licenses, and I decide to shoulder barge past the smaller doorman. I regret it shortly thereafter.

I feel I could take him.

‘Think you’re clever, do ya?’ the smaller doorman says.

I know I’m clever, I say. Inside my head.

‘Don’t worry about him,’ Paul says, in the voice he uses to talk to builders. He becomes temporarily Cockney around men he thinks are poor. ‘I’ll keep ‘im on a short leash.’

He winks and gives me a swift push on the shoulders. The doormen grimace and resume ignoring us.

I want to leave. We go inside.

The interior is like a high-tech cave, all widescreen tellies and chaotic music, blue sidelighting and the smell of congealed energy drink. At the bar we get two sets of double whiskey-cokes because we are doing this in a streamlined fashion, you know. Not our first rodeo.

Jolie says that all the time: not my first rodeo. She winks when she says it. I stopped finding it funny on a holiday in Cancun in 2009. One gummy night, there was a mechanical bull in the bar and Jolie hopped on and broke the week’s record, and even looked sexy doing it, like some kind of magical cowboy princess with her swishy black hair. She fell off stylishly and curtsied to the bull operator man and winked at me and said not my first rodeo. Then I went on and was thrown off within four seconds and dislocated my shoulder on the bouncy landing zone, and cried in front of all the fat Yanks.

Still at the bar, Paul tries to buy drinks for the Sorry Benedict! girls but they don’t seem to hear him so we gulp our first whiskies and carry the second ones out to the middle of the room.

Paul gives me a look of exhilaration. I feel thumblike.

For a while we dance, but Paul looks like a cockatoo having an aneurysm and wherever we move, the crowd parts gingerly around us as if we require a margin of error.

We’ve finished our drinks, so we acquire two new sets, finish those, buy more, swallow them, go to the toilets, piss partially on the floor, more drinks, talk to some friendly overweight hens, then we really dance.

The hens circle us and make high pitched noises and delighted faces. They’re really egging Paul on and he’s shimmying and doing the limbo under their giant inflatable dick and now he has most certainly broken a sweat.

One of the blonder hens has taken a real shine to him and I return from a piss to find them feverish, him grasping her bare thighs from behind. Her eyes are closed and her neck is at a funny angle, but they are swirling their hips in a nearly-synchronised loop. I want to leave.

I go to the bar, order a pint, slump in the womb of a sticky leatherette booth. I check my phone. I put my feet up on the seats opposite, fuck it. For a while I snooze, semi upright, wishing I was home.

When I open my eyes, the purple dress girl who kept bashing in to me is sitting inside my booth. She leans towards me, low over the table, balancing chin on knuckles.

‘Do you mind?’ I say, waving at my pint pointlessly. ‘And my name is John.’

‘But why you looking so sad though, Benniedict?’ she says.

Her eyelids are at half-mast. Inside my ribs, there is the sensation of a small rodent, trapped.

I remove my phone from my pocket again, poke the screen. Still nothing.

‘Ha!’ the girl parrots. She puts her knuckles to her temples, rests her head like that, looks at me frankly. The skin around her eyes stretches upwards. ‘Look, ifya don’t wan’talk about it we can talk about—.’

‘—We weren’t actually married, if you must know.’

I’d told Jolie I didn’t really see myself settling down.

‘Aaah.’ The girl nods sagely. ‘How long together?’

My throat feels like something is trying to scurry through it.

‘Waddafuck,’ purple dress girl says, slipping her hands from her face and smacking them on the table. ‘Silly boy.’

‘Well. Nmn, yes.’ I say. I look over at the DJ, who is checking his watch, a strained expression sharpening his doughy features. ‘I think now, I’ll be alone forever.’

At that, purple dress girl slides until she is horizontal, cheek on the syrupy table.

‘Aaah Bennie, don’say that.’ Her eyes slacken, then close. ‘I felt that one before. We might—. That might never appen.’

She falls asleep. I want to leave.