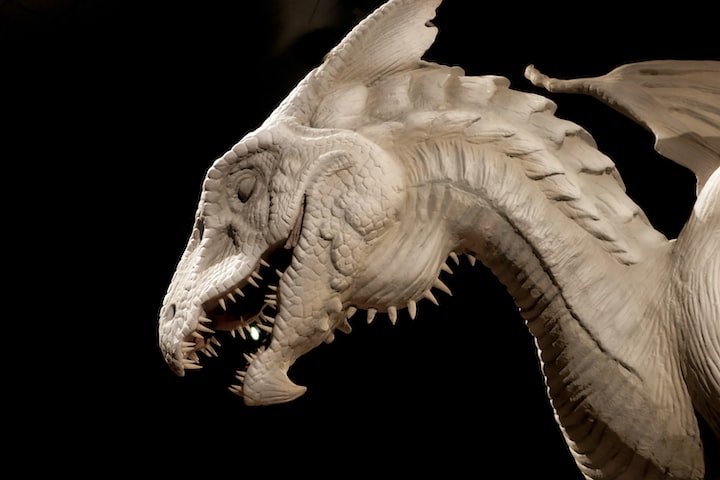 Photo by Alyzah K on Unsplash

There weren’t always dragons in the valley. Now people are used to their existence. It was a weekly occurrence that there would be a village scorched or a guard swept away in large claws. But only five years ago there was not a single dragon. I should know, as I helped in their coming back.

I am a wizard. Yes, a wizard. Even though there are canons and guns I still find work, though mostly as a healer or alchemist. Before the work I do now, I was with a friend. A revered wizard himself, who was known throughout the valley as the “Prophet of Magic”. His real name was Thearin. He was never fully accepted by the others at the college. His ideas sounded outlandish. His temper was that of a raging bull. it was in subtle ways he always seemed to be proved right.

Five years ago I was working with him often on adventures to study and test his ideas, when one day he came up to me with a disgruntled look he often had after meeting the dean of the college. I asked him what happened, only to have him reply “They never will understand.”

“Understand what?” I asked.

“I have a theory about all the bones we began to find in the north. But when I told them it involved dragons, they laughed at me. ME! Like I am some lunatic.” I didn’t dare tell him he did look like he had gone a little mad. “Well, I am going to go up there to prove them wrong. Will you join me?” His hand found a place on my shoulder.

“Um… sure.” I answered, though in my stomach I felt this bad sensation.

When we got up there, it was night. The archaeologists had all left to rest as the base. We were halfway up the mountain at a dig site. The moonlight shone bright. There is a clearing with the dig site in it, and there are bones highlighted by the moon. It was picturesque and serene.

I rested by a tree near the clearing. My feet ache from the hike. The couple days it took to travel up here were not easy. My eyes, heavy as lead and iron, began to close. But then I heard “Harold, come here!” I knew it was Thearin.

I slowly get up, and see a large vial in his hand, glowing a deep red. “What is that?” I yelled to him as I approach.

“This is what will prove me right these are dragon bones. Watch.”

I stopped moving and stared at him. He took the top off of the vial. He began to chant. I never heard that chant before, and it sounded eerie. The tones were ones us wizards never had used in other spells I knew.

When he finished, he poured the vial onto the bones. The red liquid moved like blood. It was thicker than water, and the glowing in the night made the whole area glow this deep shade of red. When it landed on the bones It coated the bones, only to then seep into them and disappear. I took another step back out of instinct.

Suddenly, the bones began to glow, then grow. Flesh soon was forming and more. Thearin off to the side screams “It’s working! Yes!” I knew we were in trouble. Necromancy was a forbidden magic.

I step forward to tell him to run, but nothing comes out. I see a dragon forming right in front of me, and the face is looking at me. Before the eyes form it is starting to move. The beast’s nostrils flared and its mouth snapped.

It was not long before the dragon had become fully formed. Silence at last filled the air as the magic ended its final sputters of work. The creature looked at Thearin, Thearin at it. Then Thearin broke the silence with a whisper, “You are real. I have brought you back. They think I am crazy, but here you are." I watch this, mouth dropped to the floor. Then louder he says, "Do you have a name? Do you speak?”

I saw this and I knew now we should run. How was Thearin so calm during this? The dragon never answered Thearin. Instead, the mighty dragon peered down with its red eyes and stared at the Thearin. Then it looked up at the clear sky, and all of the stars above.

“I will call you Fyrstrtid, The first one.” He said to the dragon. “And you will be proof of your existence to all who mocked me.”

I was getting more uncomfortable every second. The dragon, scaly and unwavering, started to rise. That is when I noticed that the dragon’s wings and body had a deep red just like the liquid it was born from. The beast leaped up and rose into the air. Its wings had brilliant red lines on the black scales.

Thearin again yelling to the creature before him said “Yes! Raise and become what you…”. He never got to finish that sentence. As he said you the dragon grabbed him in his large earth covered claws and flew further into the mountains. I saw this and ran as fast as I could all the way to the city, back behind the walls.

Once there I finally stop. I am drenched in sweat. My legs feel like blades of grass under the weight of my body. I look around to see no one has any idea what just happened. It took me the night to make sure I wasn’t dreaming the whole thing. It was so strange. Yet it was real, and I had to now go on with that reality. Within days the dragon showed up at the city. It was repelled, but not without damaging some of the lower quarters and outer farms.

When the king came to our college, I told him what I knew, and immediately became an advisor to the new threat. I start to make plans to get the city ready for the future.

We all have grown accustomed to a dragon sighting and attack since those days. The defense of the city has been made to better handle dragon attacks. I am in charge of the guards trained and specialized in dragon attacks, repelling, and killing. Overall life has moved forward.

But something still worries me about the dragons. Every night I look to the north. That is still where the dragons come from and where Thearin was taken. There are many more lights in the mountains now, almost the size of a city. The dragons return to it if we fail to kill them.

I suspect that those bright lights hold a dark truth. Thousands of dragons have been seen. There have been many attacks. We must have killed at least a hundred, yet more and more we hear of an attack.

I have kept a journal detailing my theory. There is evidence of more attacks occurring in the past few months, and that the dragons all fly back to that area. I plan to tell the king about it tomorrow with us in this defensible position. If my suspicions are right, this whole valley may not survive another five years.

More stories from Nicholas La Pierre and writers in Fiction and other communities.