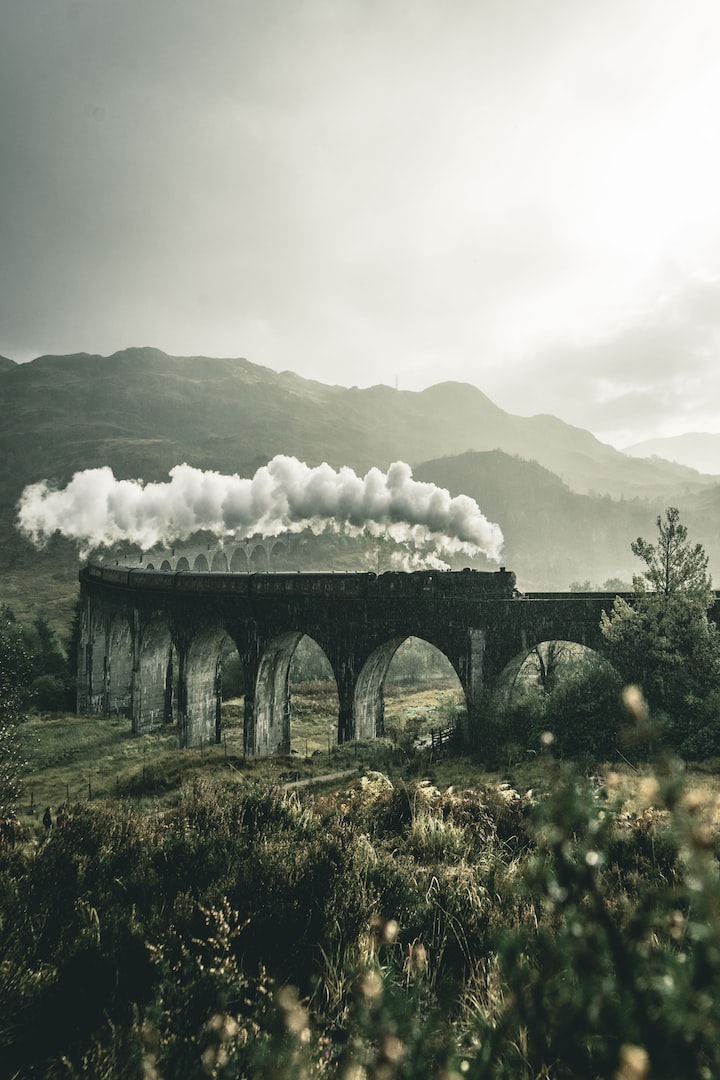 Photo by Roland Lösslein on Unsplash

The rhythmic sound of the rolling wheels and the gentle yet purposed sensation of movement lulled her to a dream state. She was dreaming she was on a train anticipating arriving at an un-named destination. She sat engulphed by the landscape and it's everchanging shades of greens, golds, and browns, a nostalgic farm house here and there dotted the landscape. How beautiful, how peaceful it all is she thought. She sat content taking it all in. This was the first peace she had experienced in quite a while.

Ever since she turned 64 her mind relentlessly wandered daily to a place she thought she would never be, well lets just say, a place that she had not thought would arrive so abruptly! She doesn't remember getting "old". She can hear herself telling her friends "It's as if I woke one morning and suddenly I was old. I went to sleep the night before feeling as if I had my whole life ahead of me. When I woke, wham, I am old." To which they, for the most part, would give a hearty laugh.

Personally she doesn't find any of it funny. Hmm.. she wonders, am I rare or do other women feel this as well? She concludes that those who do certainly don't want to discuss it much!

Her mind had invited a friend, a heavy sadness, of which she has used as a platform to reach a stage of true grief. It has taken up residency and lay deep in her being, quietly nudging, just enough to let her know it's there. Yet, so powerful as to affect her very spirit in life. Loved ones ask if she is "OK" more often than not these days. She, who was the very center of all get togethers, who people gravitated to, who emulated love, acceptance, the joy of life, with a wit and sense of humor that never diminished, who had been of service to others, who had a spiritual relationship with her God allowing her a gracious wisdom, and who he had blessed with beauty, a beauty made more so by the fact that she had no idea how beautiful she truly was. She was also blessed with a strong back bone, after all, it had to hold her up!

And all of this was the perfect environment to grow a good sized ego! Fertilized with pride and a constitution that firmly stated she could do anything, and on her own, for the most part. To admit that she had health issues, could hardly see or hear, was incapable of keeping up the level of energy she had always had, to which was now replaced with a tiredness that occupied her whole being and rested in her bones, her bones that now ached at different extremes throughout her days. And the loneliness, the loneliness engulfed her at times, here she was surrounded by her children and grandchildren, her family, and the few friends that had not passed on before her, while this loneliness hovered above her, just beyond her reach, if she could only get a hold on it she would remove it from her life. This loneliness, that she did not understand nor could she express to anyone.

Oh she had tried at times, however; the words accompanied by a familiar lump, as if she had eaten a lemon slice, that tickled her jaw! Stuck in her throat. Any sound from her would release an onslaught of hot grieving tears down her cheeks! Then all would know she was weak and had lost her confidence, she would appear needy and above all they would know that she was lonely! The few times she had allowed herself to go there, in her opinion, she was made to feel as if she was over reacting, too emotional! And all of this embarrassed her!

She was very much aware that she no longer planned for events to far in the future. That she felt guilty for how she had treated her body and the health issues that had resulted from "all the fun she had had!" Not to mention the fact that there were times she should have made better choices as a mother, a friend and partner. Her beauty was fading and she grieved her youth, why she even grieved the outings with her children, the holidays and milestones in theirs and her grandchildren's life's which would occur after she was gone. Along with the missed opportunities, poor planning, and un-accomplished goals, made for a long list. And she worried, worried that she would be a burden to her loved ones, as she aged even more. She missed her children and grandchildren already! And as crazy as it seems, she even worried about after she was gone. After all, the government and and the world was a mess and she would not be here to guide or support her loved ones. Good Lord, no wonder she had had no peace!

She must have fallen asleep, the loud and abrupt whistle of the train startled her, her head bounced from the window it had been resting on, suddenly awake, eyes wide open, her mind confused, she shook her head and wiped her eyes as she attempted to make sense of it all. She was on a moving train and she was wide awake, she had no memory of boarding and no knowledge of her destination. How could this be? As she viewed the landscape flashing by, she now felt only fear and bewilderment. How could she not remember boarding a train? She must still be dreaming! Oh, she wished she was, the urge of her bladder needing to be released confirmed this was no dream.

As she made her way to the women's room she forced herself to keep her composure, providing the best smile she could for those she passed on her way. Now What? She thought while she sat releasing herself, searching through every inch of her handbag for anything that would help her understand, what she was now finding to be her reality. Finding absolutely nothing in her handbag, not even the remnants of a boarding pass, or to her horror her cell phone. She broke into tears, it was all she could do, cry! A knock on the door brought her around. She realized she had no idea how long she had let the tears flow. Everything felt so surreal.

Finding her way to her seat she resolved to ask the attendant about their destination. She knew it would sound crazy but she needed to know. "Excuse me Sir", she stated as he came by. "Yes", he responded, her words stuck in her throat causing her to hesitate, "can you tell me our destination?" she said in a low voice. " Well mam, our next stop is in an hour and 8 minutes at Queensborough". Somehow she managed to hold back the hysteria long enough to thank him. Her mind raced, Queensborough! She was not even in the USA, how could this be!

Tears flowed down her face, she grabbed the thin grey blanket she had left on her seat and covered herself tightly, all the way up to her ears, in an effort to minimize the trembling in her body and gazed out the window. Did the landscape tend to be moving faster now or was it her imagination? Whatever, the faster she arrive at a stop the better she thought. She sat watching the scenery change with the movement of the train, slowly she became aware she could no longer hear the chuga, chuga, click, clack, swoosh, of the trains wheels on the track. Tic, Toc, Tic, Toc, TIC, TOC, the sound was growing louder. It sounded just like the old upright Grandfather clock that had soothed her as a child.

Soon, she was mesmerized, the landscape had changed, this was her life she recognized as it flashed along the route, tic, TOC, tic, TOC! Oh, she remembered it all, every milestone, every accomplishment, every relationship, every love, at every age, every heartache, every shortcoming, every mistake, and every lesson she learned from her mistakes. Tic Toc, TIC TOC, the clock sounded louder and the TIC, TOC, seemed to increase in speed.

As the train careened along the track, tears fell, there she sat holding her fathers hand as he passed, the expression of love her mother had on her face the last she physically saw her, every tear her parents wiped from her cheeks, ever proud moment, every blessing she had ever received flashed with increased speed. Oh my! I was a beauty, wasn't I? She thought, even now she still held a beauty that fell short of revealing her age. Her wedding, the births of her children, the many tears she had wiped and fears she had soothed, the unbreakable bond of her family. Her life long friendships that many failed to attain, tic, toc, Tic, Toc, TIC, TOC, reverberated through her head. She took a deep breath, ashamed, she lowered her head.

Not one scene had flashed of her expressing thankfulness, or being grateful for all that was her life. She truly had been blessed, she thought, as her head remained hung, she gave thanks for all that she had been given and for all the blessings still to come. Tic, Toc, TIC, TOC, as she raised her head she could feel the force of the train moving so fast she could barely make out the changing view from her seat.

Somehow she found peace, she knew she was on a runaway train, the train was named "TIME", and that she had no control over it and that it was increasing in speed as it sped along, yet she no longer felt grief, or worry or regret, she resolved that if this be the end of her ride then so be it! It had been a good one!

She fell to one side with the force of a train making a quick turn as it raced along the track, as she did so she let out a loud and excited "Thank you, for all that was my life!" This seemed to echo above the increasingly loud tic, toc, Tic, Toc, TIC, TOC.. She was in for the ride of her life, she knew this, she also innately knew she would be greeted when she arrived at her destination and she was excited! Oh how she missed everyone! TIC, TOC, TIC, TOC, TIC, TOC..

Born and raised in Washington state, 63-yo. Mother of 4, grandmother of 14, great grand of 2. I Graduated College with a BA. My Career was in Social Services.

Family is my life.

More stories from Pamela Walsh-Holte and writers in Fiction and other communities.