by John U 12 months ago in Short Story
Report Story 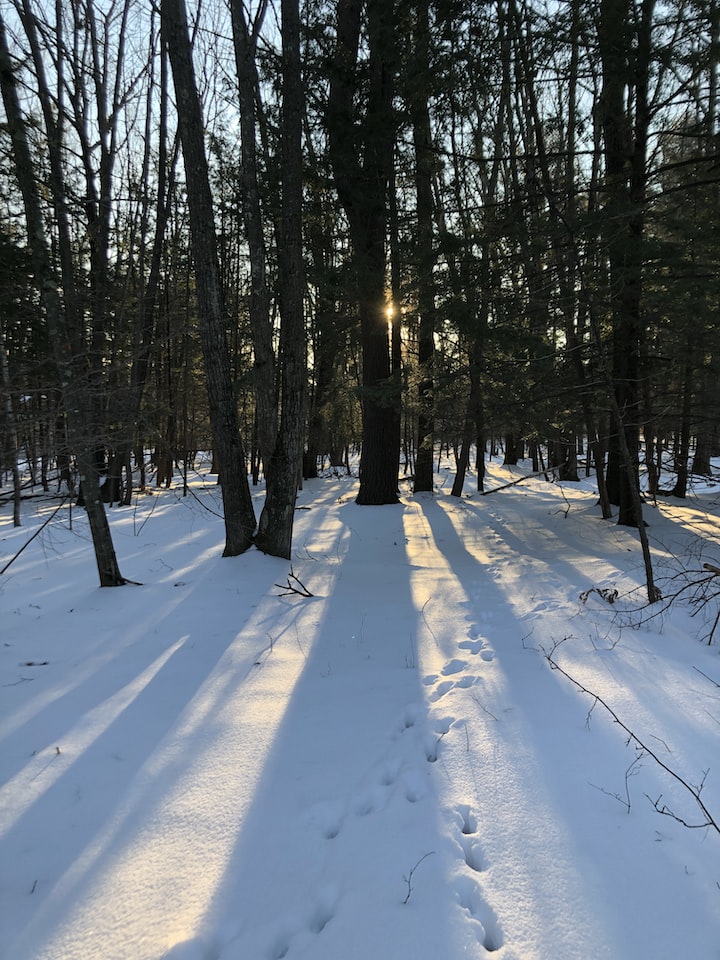 Photo by Cindy Skidgel on Unsplash

The sound of branches breaking follow the tall man as he steps out of the forest. He looks up at the sky, snow lightly falling from grey clouds, the sun doing its best to peak through but is unable. The ground in front of him has 8 inches of fresh snow, he feels the snow easily collapse after each footstep. In his right hand he’s dragging a large bag, which he had just dug up from a spot in the woods only he knows. A spot he’s gone to thousands of times over the years, to clear his mind. He reaches down and grabs a small handful of the snow, it quickly turns dark brown from the caked on dirt from his gloves. He makes a little snowball and tosses it forward. With both gloves cleaned, he gently wipes the small amount of ice and dirt that have gathered on the eyeglass portion of his respirator. Throwing the bag awkwardly over his shoulder, he continues walking. 200 yards in front of him is a glass building, which was once used as a greenhouse but the purpose of the building is now a mausoleum. Behind the mausoleum is a farmhouse, plumes of smoke emanating from the windows along with bright flashes of light. The burning house was at one point in time the house where he grew up, happy. Happiness was all too quickly wiped away thanks to the virus, leaving nothing in its wake but death and sadness. The sound of tree branches breaking echoes in the distance behind. He doesn’t lose a beat, but he knows time isn’t on his side.

The black coat drags on the ground as he walks forward, the large bag on his back awkwardly causing him to lean forward. Each breath he exhales a small cloud of condensation, the smell of burning wood faint. The purpose of the respirator is to keep the virus out, but unfortunately it doesn’t much help keep smells from entering his sinuses. He remembers his dad telling him one day as, him, his dad, and his mom walked through the city that’s just beyond the forest, “If you don’t wear this everywhere you go, you’ll end up smelling like those that have died.” He remembers the way his dad made his family’s respirators look, back then it was simply trying to cover the nose and mouth, but his father always went above and beyond. He had bought ones that covered the entire face and had big cartridges off to the side, which to everyone’s surprise turned out to be a good idea. The man fashioned it to make his look like a plague doctor mask. It seemed at some point the virus mutated, causing the dead to create a vicious scent that burned the eyes, and giving that person the virus in the process.

Green grass slowly started to enter his vision, as the sounds behind him grow ever louder and closer. He’s been stuck in this new world for 10 years, recently one of the Travelers that come through had told him that the old world is still alive far south, toward Colombia. He had brushed it off as hopeful ramblings of a tired human being, but the last couple days he’s come to the swift realization that even if they were just hopeful ramblings he doesn’t want to end up the only person north of Panama. The house in the closing distance had been a popular resting place for anyone left who wanted a place to rest and fill up their gas tanks, since his dad had turned the garage on the other side of the house into a convenience store and gas station almost 20 years ago, though the fuel levels have only dwindled leaving just enough to fill 10, 5 gallon tanks. For the longest time only few people had known about this safe haven and they never had anyone come along who did any harm to the family, until recently that is. A few days after the traveler told him about Colombia, a group of nefarious Travelers appeared in the middle of the night.

He reaches the green house, takes a moment before entering. He feels a warm tear fall down his cheek, the memories start to flood in, but he fights back further tears and opens the door. Quickly closing it behind him. He stares at the other door in front of him, his dad constructed this greenhouse to have filtered air run through the entire thing and all he has to do before opening that next door is spray an anti-viral aerosol on his entire wardrobe. The shelf next to the door has only one bottle remaining, and since he used it a few days ago he knows there’s only enough for one final rinse, but that’s all he needs now. He sprays the entire bottle out onto himself, waits a minute, opens the door and as he’s closing he hears a pound on the glass behind him, but he doesn’t flinch.

The air in the mausoleum is warm, he takes off his hood first, revealing a head of long blonde hair, tied neatly in the back to keep some of it out of his mask. Then he loosens the two straps of the respirator and pulls it over his head and he takes a long deep breath of the warm filtered air. He closes his eyes, the only thing he hears is the small hum of the vent, but outside of the building he knows what awaits him. The bag on his back slides down his broad shoulders and slumps on the green grass, he leans down and pulls the top open, inside is 4 sheathed katanas, they all have black hilts with gold lettering, his mom actually bought these for the family when her and his father went to Japan for a summer vacation almost 15 years ago, at the time he didn’t have any clue why she would get them, and she always told him it was because she thought they looked cool. She was always right, they were the only things of theirs worth holding on to, but now they’re being left where his family was buried, as makeshift gravestones. He pats the soft dirt, it took him 2 days to prepare the sites, digging deep enough and trying not to break down and walk outside and smell the contaminated air. The sound the blade made as he drew it from its sheath made him shudder, he hasn’t heard that sound in over a year. He took a look at his reflection in the shining silver, the image of his dad, but with his mom’s eyes was all he saw before he plunged the blade into the earth where his father laid. The next one didn’t quite catch him off guard, this time he saw the image of his mom’s soft face, but with his dad’s hair flowing behind him, and he lunged it into the earth where his mom laid.

He openly weeps, knowing he’s not done yet. He blames himself for what happened that night. He didn’t have to go to the city that day, he could’ve stayed. He reaches over and grabs the third katana, his knuckles white as he grips the hilt, the image of a broken man crosses the blade as he stabs into the ground where he had to bury his little sister. The day before the men showed up she begged him to go to the city to get her a special doll, of course he wanted to take her with him, but his parents said she wouldn’t be safe there. She wasn’t safe at the farmhouse either. He came home the next day to his dad’s car missing, all the food that was stored in the basement gone, and the scene of a massacre. He didn’t want to bury them, he wanted to burn everything down right then, but he knew that’s not what his dad would have wanted, or his mom, especially not his sister. Instead he planned a way to go as far south as possible then try to find a boat. He still knows that’s a long shot, but it’s all he’s got left, a car with plenty of gas, supplies for a weeks worth of travel, and hopeful ramblings.

He stands to his feet, wipes his face and grabs the last katana and pulls it from its sheath, he examines the blade and makes sure it’s sharp, by sliding the blade across the outside of the sheath leaving a large scratch. From around his neck he pulls up a gold necklace, one that his sister always wore. He opens the heart shaped locket, the pictures inside are of the family, smiling and happy. He kisses the pictures and wraps the necklace around the hilt of his sister’s katana, the heart hanging reflecting light off of its gold casing. He grabs his respirator, puts it on over his head, along with his hood and walks out toward the snow.

Waiting for him as he gets to the outside door is the embodiment of the new world, a man, crazy and hungry. Travelers have different names for them, but most just call them Zombies. The tall man, with katana in hand, kicks open the door and sends a sickening slash across the entire body of what was once a living human being, then with a flick sends the blade flying toward the sky as another Zombie stumbles toward him. He looks over at the house, the ground all around it is covered, not with snow, there’s no white to be seen as thousands of zombies hurdle toward a burning beacon of the New world.

More stories from John U and writers in Fiction and other communities.