by Rebecca/R.K. Fisher 11 months ago in Horror
Report Story 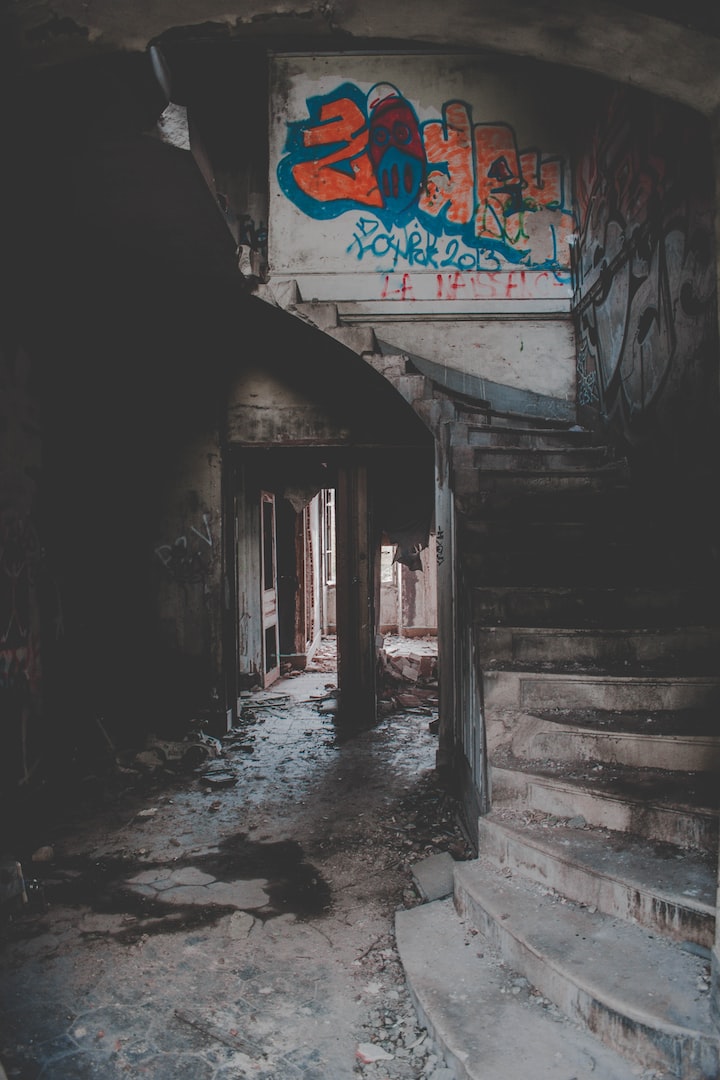 “Liz,” Michael hisses from behind me. I ignore him, hoping he’ll get the hint.

“Shhh!” I say, whipping around to glare at Michael. He’s pale, face blending with his white-blonde hair. We’ve all grown cold and clammy-looking from living inside the mountain, our skin losing the shine it must have had when we were out in the sun, enjoying the breeze and playing in the green grass.

A low, deep growl, followed by the scrabbling of claws over rock comes from somewhere to our left, chasing me from my daydreams. We flatten to our stomachs, not daring to breathe. A Jester is close by, just over the next mound from the sound of it. I signal to Michael and together we slowly crawl forward, bits of concrete, glass, and scrap metal cut through the military-grade canvas of my trousers and vest.

I have a gun and a few good knives I stole from the General’s quarters this morning, but I’d rather not use them. Guns are loud and knives are too valuable to waste.

We reach the top of a pile of rubble, peering out at the valley stretching beyond. I imagine this was once a street with houses, trees and emerald lawns.

Now it’s barren. Nothing but charred rock, bits of brick and siding, and massive craters in the ground that could have once been structures - or people.

It’s hard to tell who’s winning with everything gone. Our leaders assure us we are, yet we’re cowering in our mountain caves, nursing our wounded and hoping we have enough food to last another winter. I’d bet anything the other side is doing the same.

There hasn’t been active combat in over a year, but the air is still thick with the scent of smoke and dust and blood.

We see the Jester – huge, rat-like creatures with matted orange fur, a long whip-like tail and glowing amethyst eyes – amble towards one of the piles of rubble and start digging. Michael turns away when it exposes the half-rotted corpse buried beneath, but I crane my neck. Under the layers of grime, I can see the uniform is red, not blue.

Good. Not one of ours.

Getting Michael’s attention, I point to the right, and, while the creature snacks, we crawl away.

After what feels like hours of scraping our bodies raw along the ground, I deem it safe enough to stand and walk. I get my crude map out from my pack and study it while Michael reaches for his water skin.

“Well, that was… eventful,” he says, taking a swig before offering it to me. I almost don’t take it, too focused on trying to figure out where we are in relation to where we need to be.

“Liz,” he says, voice dropping with concern. “You need to drink.”

“We’re too far west,” I croak, wiping the back of my hand across my mouth as I hand the water skin back to him. “But that Jester won’t be busy for long, and there might be a nest nearby. We’re going to have to go around.”

I put the map back in my pack, stretch, and am already a few steps in that direction before I realize Michael hasn’t moved.

He’s watching me in that way that he does when he has something to say, but doesn’t know how to say it.

I let out an exasperated sound. “What?”

“Tell me again why you’re doing this,” he says. “I need to hear it, because right now I think you’ve just lost your mind and I’ve accompanied you on a suicide mission.”

I groan. We don’t have time for this. “I need to find my mother’s locket.”

“…Right,” Michael says. “The locket you’ve never seen, didn’t even know about until she got sick.”

Michael is my best friend, my partner. He was at my side when Mom first got the diagnosis, as I held her skeletal hand during her last hours, and when the cremation fires engulfed her body. I couldn’t think of anyone else that I’d rather take with me to find this last piece of her, a piece of the world she came from that I didn’t get to see.

Michael, like me, was born in the compound deep inside the mountain. We’ve only ventured out in the open a handful of times, mostly with General to see what waited for us up here and why we should avoid it at all costs.

A part of me understands why Michael is questioning. It’s the same part that’s wondering the same thing. Locket. What locket? I’d never seen my mother with any jewelry, not even a wedding band. It could have been a delirious dream, a side effect of the Virus as it ate away at her brain. This could all be for nothing.

“She said it’s the key to ending this,” I remember how her lips cracked and bled when they’d formed desperate words, days before the Virus took the last breath from her body. “Ending… all of this.”

My mother had been one of the Council who ruled and made decisions for our people. She’d kept us alive for decades, made sure the children born within the mountain were given food, clean water, and an education.

Virus or no Virus, if she said there was a way to end the war on the surface, then it must be true.

We stand in tense silence, but then his shoulders slump, and he gives. He re-adjusts his pack with a heavy sigh, and I can breathe again.

I wonder what it must have been like to live in a world with a clear difference between day and night. The mountain caves are darkness lit by torches, extinguished for eight hours at a time so civilians can sleep. But there isn’t much light out here, either; just a grayish glow from the sky that eventually fades to black.

We camp when it’s too dark to continue, no fire. I’ve just collapsed onto my sleeping mat and closed my eyes when I’m suddenly shaken awake. Somehow it’s light again. Michael’s face is inches from my own, and my first instinct is to swing a good punch to the side of his pretty head.

Then I hear it.

The high-pitched screeching, eerily like mad laughter, that splits the dead silence of the surface.

It’s a Jester - maybe even the same one we’d seen the day before.

And it’s right on top of us.

Michael’s staring at me. A decision needs to be made. Tears well in my eyes.

I know he’s thinking the same thing as me:

See you in the flames.

Like an electric current, we leap apart. He’s got his gun in one hand and a knife in the other. I’m on my feet, pack over my shoulder, sleeping mat forgotten. I know better than to hesitate – but I can’t help it. I watch as the Jester crawls over broken concrete, nose and whiskers twitching as it picks up our scent. It cackles again when it sees Michael, tail whipping gleefully back and forth at the prospect of fresh food.

“Come at me, you bastard,” Michael mutters, and charges.

I thought my heart had shattered when we set my mother’s body on fire, but leaving Michael to face the Jester alone breaks me.

I run as fast as I can, leaping over massive holes and clambering up piles of junk. There’s no road, no trails, and my throat, hands, and eyes burn from the effort of having to do whatever I can to get away.

I don’t know how long I’m on the move, but I know what the first red flag means when I see it, tattered and filthy though it may be.

It’s the only one left standing on that street, she’d said. Look for the red door.

I slide down another mound of rubble, my heart pounding. My foot lands on something solid, metal. Looking down, I see a thin dust-covered rectangle. I brush it off, bold white letters starting back at me:

I swallow hard. This is it. I don’t believe in ghosts, but I find myself thanking my mother for guiding me here anyway.

Slowly, I wind around an overturned car, cross craters in what was once a concrete road, and stop to stare momentarily at a building that had all its windows blown out of it, its sign hanging precariously from some wire.

The silence pressed down on my ears until they pop, and I find myself holding my breath, my steps like bombs hitting their targets.

Finally, I see it. Its roof is completely gone, as is its entire left side. There are empty squares that once held glass windows, the red paint on the front door cracked and peeling. Wearily, I climb the steps my parents probably used hundreds of times before fleeing down them for good. My hands shake as I enter the house, half-expecting to see my father’s skeleton lying across the floor, but there’s nothing.

The house is empty of furniture, likely ransacked by our enemy for fuel or comfort.

I hid it in our bedroom, on the second floor. Oh, how I used to love it when the sun would shine through the curtains in the morning...

The stairs that remain are so thick with dust that my feet don’t make a sound. There’s a floorboard I’m supposed to be looking for, one that’s loose. I should know when it squeaks. I edge around what’s left of the second floor, dismay filling my stomach.

My parents' sun-lit bedroom must have gotten blown away, the locket along with it.

I sink to my knees, facing the open half of the house. Michael is probably nothing more than bone by now and General will hang me for disobedience if I were to go back.

A scream rises in my throat, and I swallow hard. I make to stand - no use being here longer than I have to - when the dim light catches something shining below.

Heart pounding, I leap down. I land cat-like on the uneven ground before falling to my hands and knees, not caring as bits of broken glass and wood slice into my skin as I dig through the debris.

Finally, my fingers brush something small, cold, and smooth. I snatch it up with a sob of relief.

It’s a silver heart-shaped locket; a gift from my father to my mother after they were married.

How can such a small, insignificant thing end this eternal war?

In the dim grey light I see little hinges on one side, with a clasp on the other. My fingers shake so badly I almost can’t get it to open, but then the two sides fall apart in my hand, spreading like the wings of a butterfly.

I stare at the tiny grooves inside, empty, as a siren above my head begins to wail.

Rebecca wrote her first story when she was 10 years old. It was basically fanfiction, but her 4th grade teacher loved it anyway. Almost twenty years later, she's earned two degrees, is published, and works as a freelance editor.

More stories from Rebecca/R.K. Fisher and writers in Fiction and other communities.