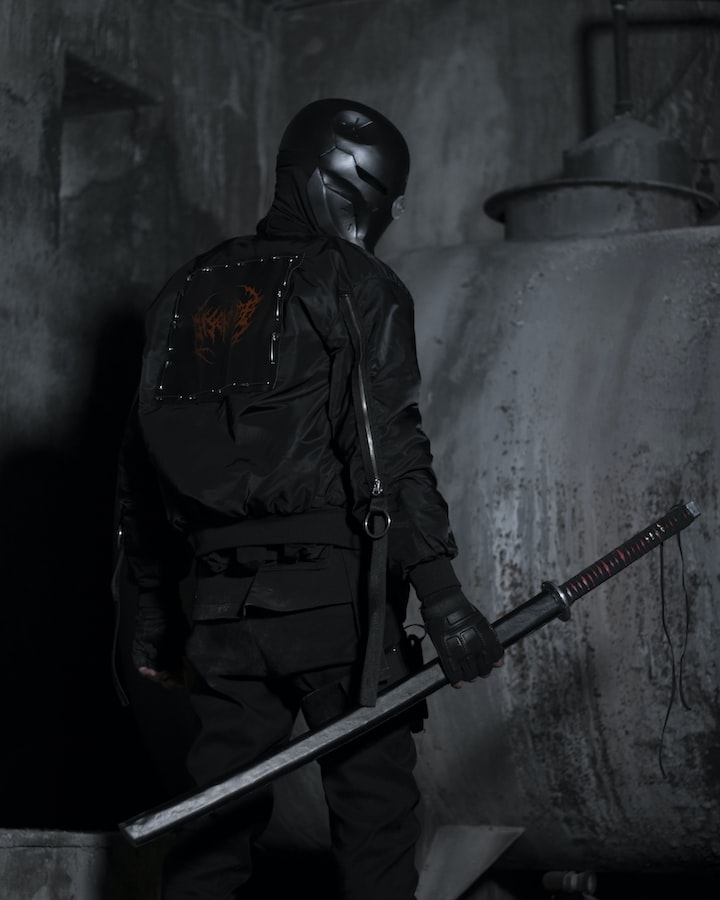 Photo by Mojtaba Hosseinzade on Unsplash

The non-fiction part of this story is that I have never had the need for an alarm clock. I kid you not. I just let my brain know what time I need to wake up, and I am up. Usually. If I oversleep, someone, a voice, my guardian angel or my genie from the lamp, will yell at me to wake up. It has happened my entire life. It is said that we all are given a guardian when we are born, angel if you wish, or a sprite, spirit, ninja, call it what you will. They say that if you listen close enough, open your mind's third eye enough, you will hear or maybe even see it. I think mine is my grandmother, dressed like a ninja. She died before I was born, but she was stubborn and willful enough to be still here, I understand.

Anyway, this voice yelled, "awake, open your third eye". Actually, there was more, but try as I might, I cannot remember anymore. I became fully awake in an instant.

There it was again. Bang, bang, bang. My front door, not gunshots, I sighed thankfully. I ran to the peephole, two dark eyes stared back at me. A man stood there.

"How can I help you". I yelled annoyingly through the closed door.

"I'm waiting for you". He replied in a sing-song voice.

"No, but I've got a present for you". A dark green drone came beeping to his shoulder holding a small box.

"Just a moment". I called out. Hurrying back inside I slipped on jeans, a tee shirt and a sweater. Who cares if my hair was mussy, but I did swig a bit of mouthwash, for morning breath. Returning to the door, and hoping that he had left, I opened it a crack. He was running slowly down the street, the drone behind him. How odd! I thought. I picked up the box, it read 'follow the stranger'. I ripped it open and found a treasure map and binoculars inside.

Without thinking, I dragged on my sneakers and ran, started chasing the total stranger down the street.

Oh! How rude of me. My name is Rezna, amateur private detective at your service. I had announced being open for business over a month now. The office is also my home, on account of my measly salary as a an office worker, just until my business gets off the ground. There have been no cases to date. But, I am resilient, I will not allow my spirit to be daunted. Just maybe, this is to be my first case. Ergo, me chasing a man dressed in black with a hood covering his head.

The drone veered off and went the opposite direction, the note said follow the stranger, so I ignored the drone. He was walking swiftly now, no longer running. He knew that I was following behind, and he kept glancing back. Suddenly he turned a corner, on reaching the spot however, there was no longer any sign of him. I happened to be standing by a newspaper dispenser, sitting on top was another box, similar to the one I had just opened. 'Read me'. I yanked it open on the spot. The note inside read "your reflexes are strong and fast. Now figure out who sent this note, and a surprise awaits. Consider this your first case". Inside was a small cheque as a retainer. At least there was something for my troubles, I hope it clears.

The announcement of the death of Sir Gordon of Tewsbury, was boldly outlined on the front page. I'm sure that he had a long and wonderful life. I thought to myself. They will just shove me six feet under and be done with it. Sir G of Tews, rest in peace. How wrong I had been then. The box had been deliberately left by the death notice for me to see it.

Back at home another box awaited by the door. Inside was another note telling me 'the answer is to be found in your lineage'. My lineage? You mean in Africa? This was the worst treasure hunt in history. I called up my mother. She had something to tell me, she said. Was this to be the easiest detective case on record. First though, I had to post the cheque, then clear my car from the impound lot.

My parents lived in a very upscale neighborhood. My home where I grew up. They disowned me when I refused to go to regular college, I went instead to an online detective school and went off on my own. They can keep their rotten money, I can take care of myself. I bet you are thinking, 'rich spoiled brat'. You would probably be right. Being on one's own is easier said than done, but I was not homeless yet. My parents sat me down and related to me that I am a descendant of the Tewsbury.

"You mean the guy that is in the paper TEWSBURY"? I asked, astounded. "But we are not even the same nationality, my skin is decidedly different from his". Not trying to be racist, but fact is fact. I am a detective after all.

"Don't be obtuse Rezna. We live in modern times. People are just people".

"If you say so". I grumbled under my breath. "What has that got to do with me"?

"Our presence is requested at the funeral on Friday, and at the will reading at the estate on Saturday. They expressly asked that you be there along with everybody else". My father said firmly.

I never even met any of these people, whoever they are. But I did not want to embarrass my family any more than they already thought that I had. My sister Anessa owned her own accounting firm. Her they were extremely proud of, my younger brother Kalvin, was still in school, his lot is still to be decided.

I spent the next two days at the library poring over the Tewsbury family tree. It dated back over two hundred years. Theirs was not a history to be proud of. Maybe in later years they worked hard to atone for the sins of their ancestors, but not unlike many families from long ago, there would never be enough penance to wash away the hurt and pain suffered by those that they had wronged. Apparently my great grandmother was briefly married into the family Tewsbury a while back. It is still a bit fuzzy, I am sure that I will figure it all out very soon.

We dressed our best and attended the funeral amidst sidelong glances and whispered questions by the large family who must be wondering who we were. I do not know whether or not they knew of our existence. The lawyer had called me personally the previous evening to invite me to the very large estate for the reading of the will. Make sure that I am there he stated, it was of major importance. Maybe they left me a Porsche or something. I could sell it and buy myself a reliable car, with loads left over. I was not fussy.

Saturday dawned bright and sunny. We all met at the enormous house. Hands were shaken, mostly lawyer's hands, and we all sat down. He began by naming faithful employees over the years, special gifts and trusts bequeathed to numerous organizations among other subjects. He then asked that only the family members be present for the remaining portion of the will. Then he dropped a huge metaphoric bomb on us all.

"The entire estate of Tewsbury is left to Rezna Augusta Tilden, great granddaughter of Sir Gordon. It is further stipulated that he searched far and wide to find a single relative that was not fawning upon him for something or the other. Someone with an independent spirit and the temerity to stand on their own. He found Rezna to be the only one. My vast repertoire of relatives may not contest this stipulation. If you try, you will be tied up in legal fees until the day you join me in purgatory or worse".

It turns out it was the lawyer who was responsible for the boxes at the direction of the lord of the house. It was a small test of my mettle. A holy war was waged by the huge trove of relatives. I left very quickly with my family to ponder the implications of what had just transpired.

I already knew what to do. I had dreamed of this for a long time. We sat with the lawyer, Anessa and I, made plans to upgrade the property and make it children friendly. This vast space and land would be opened to children from everywhere who needed a place to call home. The homeless, the abandoned, the lonely, hurt and needy. I would reside in one of the small houses on the estate. My sister would see to the financial aspect of the whole undertaking. Kalvin would help out whenever he could. My parents would see to the overall running of the place. My mother was made for this aspect of things, she was tough, stubborn and immoveable. My father would be our protector, he had worked in government and had a trove of contacts.

Moral of the story. Be true to yourself. I furthered my studies as a private detective, it is after all what I loved. With my knowledge I was able to track, assist, protect and aid in the rescue of many of our children. I am extremely happy. The monetary aspect of things I offered to all of the other relatives to aid in whatever justified capacity that was deserved or needed. I left that to the lawyers to handle. I wanted to honor the memory of the man who put his trust in me, and I would not squander his legacy on the undeserved. There is much do.

Uk based. The journey of a thousand miles begins with one step. They diverge into diverse places and meet wonderous beings, in words I have met many. I value each writer equally, as I traverse through this wondrous writing/reading family.

More stories from Novel Allen and writers in Fiction and other communities.