by Adam Carden 10 months ago in Short Story
Report Story 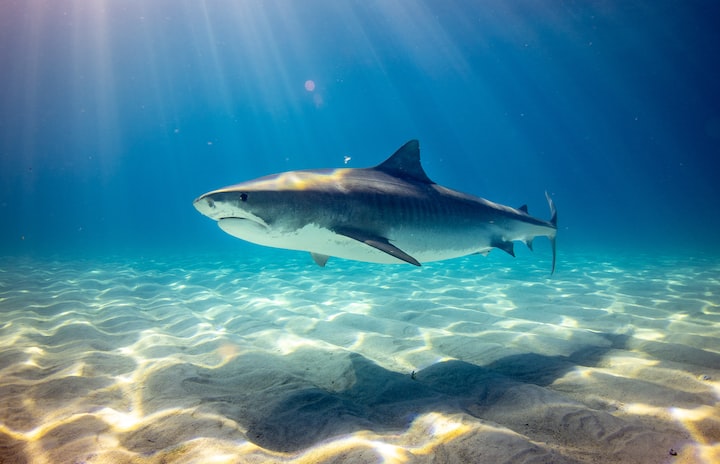 Photo by Gerald Schömbs on Unsplash

Mortimer wasn't necessarily the smartest of his kind, but he was certainly one of the biggest. Compared to some creatures his life was almost never dangerous, and very simple over all. He supposed he liked it that way, but he never knew any other way, and his interactions with other creatures was generally very short-lived and didn't involve much conversation. When he was hungry, he ate, and he ate everything from squid to tuna, and sometimes even dolphins or other sharks. Mortimer had no fear of anything, for what had he to fear?

That wasn't to say he hadn't seen some things in his over twenty years swimming the vast oceans. Earlier in his fifteenth year, he saw his cousin Bertram get skewered by a swordfish he had been trying to make his lunch. His many-toothed maw barely knew the difference when he took advantage of the opportunity to devour them both. After all, it would have been such a shame to let such an easy meal go to waste, and had he been the one who was so mortally wounded by the swordfish he was sure Bertram would have done just the same. It was nothing personal.

A few years before the unfortunate loss of dear cousin Bertram, Mortimer recalled a different sort of tragic end for one of his kind. Another shortfin mako like himself bit off more than he could chew when he approached an older, larger female with the intention to mate. Woefully, the female was extremely hungry, and the sharpest thing he would feel that day would not be the sting of rejection when she ripped him apart to sate her hunger. Witnessing this, Mortimer made a mental note not to attempt mating outside of his weight class.

The closest he had personally come to fear, however, was when he chomped down on a juicy tentacle only to find himself getting wrapped in the other tentacles with suckers that belonged to a much larger cephalopod. As sticky as the situation seemed, Mortimer just kept swimming forward and managed to chew his way out of it. The unwitting giant squid had assured its own demise when he latched onto him and attempted to draw Mortimer in to his gnashing beak - much like a bear trying to eat a chainsaw. Once Mortimer had his fill of calamari, he left the remains for the smaller fish who might have otherwise ended up dinner for the colossal, tentacled creature themselves.

Then came the boats. Large, floating objects that blocked out the light from above the surface. Their skin was much too hard for Mortimer to get through, and they stole many easy meals from him with their large nets snatching up immense numbers of fish in a terrible efficiency the likes of which he had never seen before. Again and again they came, their numbers seeming to increase where he saw more of his own food supply. Mortimer even tried attacking one of these nets as they dropped down, for how dare they come into his ocean and steal his food? He managed to latch on with his jaws, but as they pulled the contraption up and out of the ocean, he decided it might be in his best interest to let go and flip back down into the sea.

As he let go and started to fall, he heard unintelligible shouts from the top of the ship. Almost immediately after, a large, pointed object that glistened came shooting down into the water with something else tied to the end of it, and shortly after missing its mark, it was being pulled back up onto the ship. Having some knowledge of sharp things and how they work, Mortimer started swimming faster to put some distance between himself, the boats, and the sharp shiny things. Another harpoon came zipping into the water, nicking his side back near his tail fin. The scent of his own crimson life essence leaking out into the surrounding waters triggered his bloodlust, and he managed to snag a small mackerel like a drive-through snack as he continued his flight from what had wounded him.

Just as soon as he was almost clear of the ships with the shouting creatures, his acute hearing warned him that another of his brethren had caught his scent and was bearing down on him. Mortimer tried to turn and get away, but his wound slowed his mobility. This was the end for him, Mortimer the devourer, Mortimer the slayer of the kraken - for he who lives by the sharp teeth...

Another of the long, sharp implements that had cut him came hurtling through the ocean, spearing the other approaching shark with a murderous precision that Mortimer could only marvel at as he took the opportunity to leave the area that still reeked of his blood, but only after he decided to take a large bite from the one who would make him his prey. That was the closest Mortimer had ever been to feeling fear, but fate, as it seems, would have him live to eat another day.

More stories from Adam Carden and writers in Fiction and other communities.