by Liv 5 months ago in Young Adult
Report Story 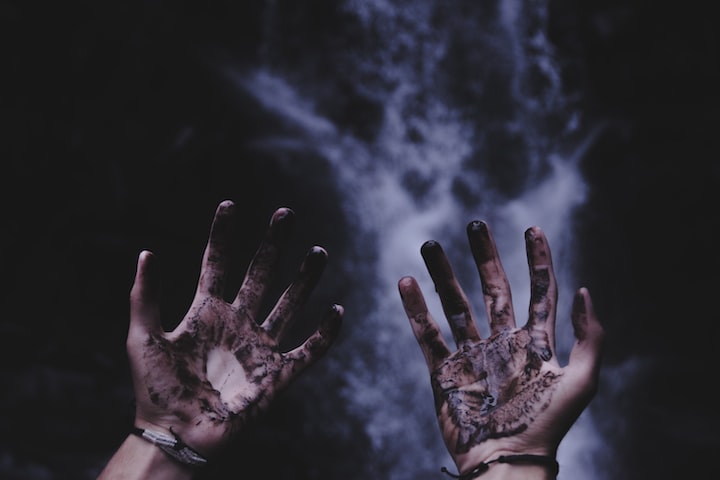 This is the thirty-eighth chapter of the novel, Mortal. Click here for the beginning of the story. Or, click here to view all chapters.

“Drop the gun, Arthur,” Abel orders as the metal barrel twists into the tight flesh near my scalp. My hands grapple with his arm tucked into my throat, but his grip is steely, and all I can think as the oxygen is slowly squeezed out of me—why is this happening? What could I have possibly missed?

The Secretary eyes are narrowed and his teeth are clenched in a silent hiss. He meets my frightened gaze as I choke on dead air, and I see his resolve falter. With hunched shoulders, he sets the gun on the desk.

Just as he does, four Corpses, brush past Abel and me and into the office. They are all middle-aged or older, grey lines of hair matching with the wrinkled lines in their faces. They all carry guns and dress professionally, similar to Abel. Some of their clothes are smeared and speckled with blood, and with a dread-filled punch to the gut, I know its not theirs. The only woman takes the Secretary’s gun off the desk and pockets it before closing the curtains on the window while one of the men help lower Therese back into her chair. The other two watch Paracot like hungry predators, from separate corners of the room.

Only then does Abel release me with a slight push. I take a staggered step, regaining my balance, before whirling around to face him. I stare at him, my breath coming out in hard pants, trying to figure out what has changed in him.

“Abel,” I begin unsurely, glancing warily around the room at the Corpses before returning to look into his warm eyes. I decide to start small, “What happened to you? Paracot said he put you in a experiment…”

I look over my shoulder at the Secretary, to see him seething, and I know it’s true. A flush of anger heats my cheeks knowing he slammed me with guilt over a well-placed lie. I feel a surge of relief at the realization Abel endured no more pain after I left because of me. But it quickly resolves when I refocus on why he’s here. When I face him again, he says, “After you left me in the alley, VitCorp took me in and got me back on my feet. We’ve been waiting ever since.”

“Waiting for this,” he responds coolly.

Abel’s eyes crease as a pang of grave sadness flashes across his face, “Because I am them, Garrett.”

I should have expected this from the moment he grabbed me in a head lock, but the shock of knowing my friend is a Corpse, who must have wanted me dead since he met me nearly two years ago, knocks the wind out of me. But he helped me escape to avoid getting killed, he saved me from Joe! I don’t understand.

Abel must recognize the confusion on my face because his eyes flick up to the Secretary, “Tell him, Arthur,” he pulls up his sleeve to reveal the number on his wrist, “Tell him that you only had to tattoo three more numbers in because I already had the rest. Tell him Eden came up with this coding system because I was one of its first.”

My fingers tremble as I glance back at the Secretary only to realize I don’t care what he has to say. “Why are you doing this?!” I shout at Abel, launching all the anger, hurt and betrayal his way. “You’re hurting people we care about! You shot Therese!” I point a finger at her in emphasis, and her dark eyes glare at him in turn.

Abel lifts his hands, placating, “She resisted our request. We didn’t want to shoot her.”

“Right,” I snap, “You just want to kill me.” Tears pool in my eyes, blurring my vision, making my mouth raw and jittery. I still feel his gun against my head, and the betrayal reminds me of my parents, of Bern and Edward. I can barely contain the sob in my throat begging to be released.

“Garrett,” Abel sighs sympathetically, but instead of soothing, it makes me flinch. “Do you remember Asterfield Park?”

I nod my head, in subtle affirmation. Lucy and I had gone there to see the reenactment of the Battle of Turkey Kettle. There, I was attacked by a Corpse.

“You met one of my colleagues. He told you, ‘If you want to hide, run towards.’ We’re trying to help you, Garrett. You’re not meant to be here,” Abel explains.

“None of us were meant to be here,” Therese jumps in. I can tell by the creases of anger in her face that she’s just as horrified by Abel’s betrayal as I am.

“That’s not necessarily true,” Abel smiles knowingly, with a twinkle in his eye.

“They’re not here for anyone else,” The Secretary interjects, “Just Garrett.”

“I know why they’re here,” Therese bites back. I know she’s upset from the fact that Abel apparently had all these resources, to save us, but for some reason chose to wait until this moment, and to not save, but to inflict pain.

“I don’t understand,” I turn back to Abel, “What does that even mean?” When that man’s hand was around my throat in the pelting rain, that phrase had spooked me. I couldn’t figure out what it meant, but I also didn’t want to try very hard either. I was unwilling. Because it didn’t make sense. I wanted to escape Project Eden, but when I was brought back, things only got worse. But I guess maybe not for the Corpses.

Abel smiles at me, “What are you afraid of?”

I stare at him, my mind reeling as thoughts start to click together. I’m afraid of Project Eden, but what am I—

“Enough of this—bull shit!” Therese yells out, “I don't want to hear it anymore.”

Abel glowers at her, “You were a good friend to me, Therese. But unfortunately for you, your opinion means nothing to me.”

Therese’s face darkens, “You’re such a—“

“Therese! It’s okay,” I try to calm her, but she only seems to get angrier. I smile apologetically at her, a will for her to understand. “Abel, what do you want?” If he’s going to try to kill me, he may as well get it over with. What is he waiting for?

“Come with us. I’ll take you to Lucy,” Abel states.

My mouth dries out after hearing her name, “You haven’t hurt her, have you?”

“She’s fine,” Abel replies before his hard gaze focuses on the Secretary behind me, “As fine as she can be.”

My heart skips a beat, “Okay,” I say, nodding at Abel. At the moment, I know we are in no place to call the shots, and if I can see Lucy while learning more about VitCorp before they decide what to do with me, that’s more than fine.

Paracot struggles behind me as the two Corpses eyeing him, grab and pull his arms behind his back, “Get off me!” His teeth are gritted, and sweat bursts from his forehead as his eyes bulge. The third Corpse, the woman, helps pin his wrists together.

“If necessary,” the woman’s squeaky voice growls, “We don’t mind knocking you out, Arthur.”

Paracot’s face pales, and I can tell he’s terrified. Terrified that the Corpses are going to do what he’s done so many times to us.

The other Corpse holds the door open, and Abel nods at me with a strange twinkle in his eye before he turns for the exit.

That’s when I notice Therese, with shaking hands, is holding a gun. My gun. And she’s pointing it at Abel’s head and tears are welling in her eyes and if she shoots him he’ll end up like—

“Therese!” I lunge at her, wrapping my arms around her waist and pulling her down.

We land with a thud, and I try to pry her fingers from the gun, and she’s looking up at me, staring at me with shock and resentment, glassy liquid finally pooling over eyelids to trace down her cheeks.

“Don’t do this,” I pant out, desperately trying to get through to her as my strength fades and hers only seems to build.

“He’s a monster!” Therese screams, her breath hot in my face. The animosity in her voice makes my ears ring, creating an eerie symphony with the pulsing of my own blood.

She jerks to the side, and I go with her. I try to yank the gun away, but her palms squeeze into my fingers and—Pain. I’m overwhelmed with pain. And there’s shouting, so much shouting…and crying and…

I peel my eyes open, ramming hard against the pain, I look down at her, to let her know that I’m okay, that it hurts, and it’s okay, but it hurts, and—

The girl below me isn’t Therese, but the girl with black tears smiling up at me.

And now I know her name.