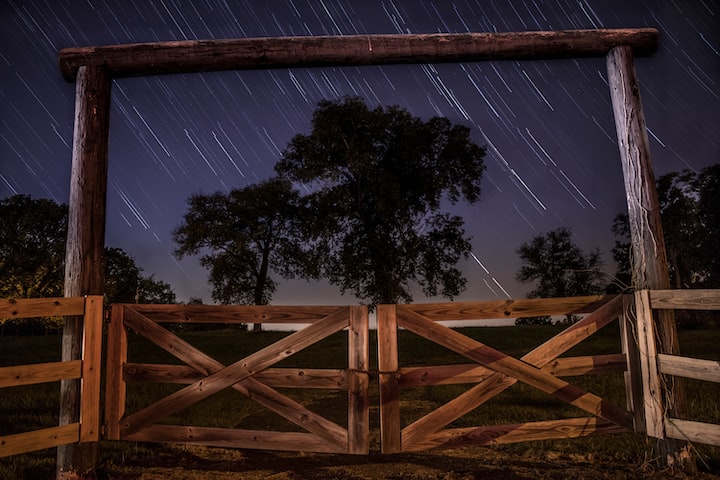 Photo by John Moore on Unsplash

Slipshod crunch - there goes another. From the back, take that one or it’ll rot. Ya can’t make the older ones comply and there’s too much blood in the honey. And they’ll tell you it’s nonsense, that it doesn’t fit convention. But why would you want it to? Accordingly, those were only some of the lessons I learned from Delvina before she decided to turn in her mortal coil and hit the heavenly highway. There hadn’t been much talk about it prior, and we all know the ranch will be fine without her, but the garden and the apiary might fall to ruin. That will screw us all.

What then, when too many of the bees die? To me, that seems like a less immediate issue than the bulls we need to stud. Hell, I’m just a hired hand, what do I know, right? Except when things talk, I listen and, 'round matters of insanity anyway, I’m as open-minded as I am well-versed. Things tend to take circuitous paths, and I often find myself in the thick of the mix. Like with that damned blood in the honey incident I’ll never live down.

But to be honest, I can’t say I care much. Losing a finger isn’t as bad as losing faith in someone because they’ve gone and done their job half-assedly again. If ya can’t figure out how to use your full ass, don’t bother me later when it all falls to shit. If it were up to me, we’d outsource the apiary and focus on the ranch. Too many bulls to stud and do ya think anyone enjoys doing that?

Could be that crazy uncle Larry enjoys it, but he wasn’t quite right to begin with. 17 dozen mule kicks to the head later and he’s wearing a tinfoil helmet to keep the microwaves out. Because, you see, that’s how they read your mind. Paranoia 101; there is truly no rest for the wicked. He routinely stays awake until his body systematically shuts down. I’ve seen him slump over on more than one occasion, mid-sentence, while catching tadpoles for breakfast. Who eats stuff like that? Would he do that kinda shit even if he was right in the head? I always wonder.

What doesn’t break us makes us they say in NA. Or maybe that’s church. Or that one car commercial with that one dude who had a talk show in the 90’s. Someone, somewhere once said something, and I’ll be damned if I know it now, but the gist of it is what doesn’t kill us makes us stronger.

And that’s what I’d thought, at first. Living lonely off the land for too long maybe I get to thinking about things that don’t much interest other folks. Butterflies and dragonflies swarm about my head, sets me to thinking of how the rainfall doesn’t wash away the bad things, just changes their scent a little to throw the animals off. Point is, the things that don’t break us don’t necessarily make us stronger. Sometimes they make us stronger, but sometimes they just make us…well, different than we were before. And I suppose that’s alright too. Necessary even.

So, I’m just wandering around with nine fingers and head full of uncomfortable ideas about the lives of things, about how animals don’t fuss as much as humans, even the ones born to slaughter. Don’t think they don’t know better. It is genetically programmed, the knowledge they are bred to kill. Don’t ask me how I know that. Other than, like I said, when things talk, I listen.

Too many fruitcakes, fruit flies swarming over them as the fruit jelly oozes from within. Fetid flies and fetid lies. Because we all know there was bad blood in the family and how deep that can run. Wounds heal slowly when they aren’t tended to. Blood oranges and blood baths, hollow tears and hollow laughs. And me? Hell, I just walk away slowly. Getting in my thinking spell about how all funerals and wakes are pretty much the same. Delvina would reject all this pomp outright. Gimme my corncob pipe, she’d holler. And the shadows would grow long as the day considered yielding to dusk. All those things happening in consequence of one another, as if they had some kind of choice in the matter. They never did, and it hurt to pretend.

Didn’t use to hurt, but then I didn’t use to have to pretend as much. There is something in the middle of this particular uncomfortable thought that tells me the cost of living is sometimes too high. It would be different if we had more purpose. Like the animals on the ranch, for example. Bulls stud, that’s what they do. It is their only purpose. Sure, we eat them in the end, use their hide and every part we can, all resourceful like, but without the ability to stud, they are useless. If I had one clear purpose like that, well, then I’d have ten fingers, wouldn’t I? It’s an inexorable certainty that haunts me.

But life isn’t about would-bes, so I walk down to the gully and try to imagine Delvina in a different time. Somewhere warm and soft where her body is fuller of life than it had been toward the end. Then, I realize this is only another daydream of would-bes and I think it’s funny how hypocritical I’ve become. Hell, we all have. Because Delvina was sick as hell, there was no denying that. But none of us believe that she died of natural causes. Not that anyone is talking about it.

Brambling salmon berries overripened with regret as much as anything. Somehow more putrid because of it and the sun-filled sky too wide with possibilities to contemplate. Pink and blue, the dense lush green, full of unknown dangers and pleasures in alternate hues. Too much time wasted while the bulls are in rut and something just east of catastrophic looms on the horizon of that too-wide sky. I feel it in my bones. Nonetheless, the bulls will be culled right back into the herd, bastard things they are, denied their purpose, an affront to God, really. Nothing I can do about it though. Nothing anyone can do right now. Not with poor Delvina barely cold in the ground.

It was her property, so she found a loophole in the law that allowed her to be buried there, straight into the ground, no embalming fluid or coffin. Good old fashioned worm food, that’s what I oughtta be, she’d cackle. I knew she wasn’t joking because I listen, but it’s a fight with the mortician all the same. Big coffin trying to make a buck, I reckon. The business of dying and all.

It’s as normal as it is disgusting, profiting from someone’s grief like that. Or maybe disgusting that it’s normal. But again, what do I know? I only think about how different things would be if it weren’t for the temperament of bulls. Bull-headed was an expression for a reason. Hell, maybe that’s why Delvina thought to raise them to begin with. The inherent obstinacy of things always did challenge rather than deter her. Damned admirable trait, if anyone bothers to notice. Mostly they don’t, people walking around shrouded in self-importance as they typically are. If it weren’t for my daydreams, I don’t suspect I’d like anyone much. In my fancies, people are always nicer, more genuine. If daydreaming is an artform, then I am mastering it.

The roar of bombers in the static night. Ripping the sky open like a vein under scalpel. Apiaries are deafening in a way most can’t imagine; the buzz creates a roar creates a vibration creates a sensation that you feel as much as hear. It pulsates through your nervous system. Deep, longing pulsations that get some people aroused. Not me, but some. It tickles me to imagine Delvina in there, getting aroused and not knowing what to do with that sensation on account of her being what they call asexual. Course, I never exactly understood what she meant by that. Strange to think that someone in the business of breeding had no interest whatsoever in sex.

But who knows? Maybe that’s why she was into it. Could be that was the only sex she ever had, pollinating and inseminating. I suppose it makes a strange kinda sense. At least, as much as anything else. As I sit and contemplate, it occurs to me as rather beautiful, poetic even. Something about the way she could create life without ever compromising herself. Hell, for all I know she had a messiah complex and a bunch of strange kinks. But it made the milk and honey. And that was her gift.

Anyway, I’m not here to judge. I’m just the hired help, walking around with nine fingers, a few jars of bloodied honey, and a bunch of uncomfortable ideas about the lives of things.