Message in a Bottle

In a ruined world, a brother and sister approach an old farmhouse is search of shelter and supplies. What will they find inside? 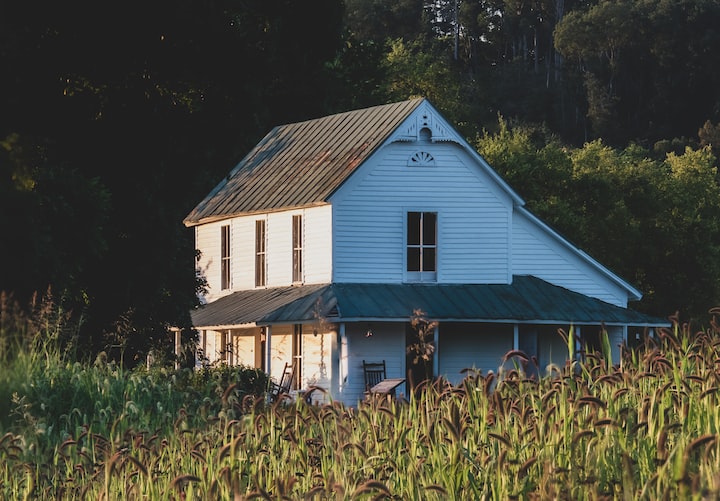 Photo by Stephen Ellis on Unsplash

Only the sound of wind and the cry of birds answered.

He shrugged and turned to Alice. “I think it’s safe.”

She pushed past her brother and entered the farmhouse. Her ears strained for any hint that they were no longer alone. The house had a worn, lived-in feel. A bowl and a mug still sat on the kitchen table. A clock on the wall had stopped at half-past five.

The gangs must have missed this place, or perhaps they were deterred by the long gravel drive. Strange. They usually hit the farms first. The house showed none of the usual ravages since the fall—the looting, the destruction, and wanton violence that Alice had come to expect. The last place they’d tried to stop had fresh blood splattered on the walls.

In here, it was almost as if nothing had happened. It didn’t even look like the farmhouse had been abandoned. Alice half-expected their grandmother to come bustling down the stairs and offer them hot chocolate and cookies. But Grandma had died years ago, and her farm had been sold. Alice was relieved that she hadn’t lived to see this.

David opened the refrigerator. The stench of rotted food filled the room.

He gagged and slammed the door. “Answers the question of whether they had a generator. Hopefully, the pantry’ll have some food. We might even be able to shower. God, how long has it been?”

Alice closed her eyes. She wanted to scream.

That’s how long it had been since the world ended. No one knew why the power grids had failed. World governments were scrambling to restore power and control the riots when people started disappearing. Some said it was aliens, while others claimed it was the Rapture, or that the missing people been sucked into an alternate dimension. There were so many rumors. It didn’t really matter if any of them were true.

“But if they were preppers, where did they go?”

He shrugged. “Who cares? I’ll bet they’ve got camping gear and stuff, too. We should check the barn and the shed.”

David shoveled armloads of food into his backpack.

“I’ll look upstairs. See if they have any coats or anything,” Alice said.

She walked down the hallway and headed up the stairs. The wooden banister was smooth beneath her hand, and the stairs creaked just like Grandma’s.

Upstairs, there were three bedrooms, a linen closet, and a bathroom. Cheerful wildlife prints decorated the walls. The first room she checked must have been their spare bedroom—it contained a bed with a rust-colored quilt and two empty bedside tables. The next room was clearly a little girl’s room. It had cheerful plush toys, unicorn and kitten posters, and bunk beds with matching pink sheets. Plastic letters spelled the name “Hannah” on the wall.

Alice froze in the doorway. She couldn’t breathe. Her eyes blurred. Those beds—they were exactly like the ones she used to share with her baby sister Monica. Her hand clutched the silver locket around her neck. Monica’s locket. It should still be her sister’s. Alice’s grip tightened, and then she traced the swirling patterns on the front with her finger. She still couldn’t bear to open it.

Inside the closet of the master bedroom, she found treasure. Items that might keep them alive. Winter coats made with HI-LEX, a lightweight waterproof fabric rated for sixty degrees below zero. She also found boots. Sturdy ones, the type that would last for years. They would probably be too big, but socks could take care of that. She found thick, heavy socks in the top drawer of the dresser. Anything she thought they could use, she piled on the bed.

Then Alice slept. She didn’t know how long she rested until David shook her awake. It was nice to feel safe again.

The sun was setting. Lengthening shadows stretched across the floor.

Alice raced to put them out. “What were you thinking? Do you know how easy these will make it for people to find us?”

“I covered the window. It should be safe.”

Alice raised the blinds. “Are you crazy? The outside must look the same. Otherwise, anyone familiar with this place will know that there are people here. Don’t you remember our rules?”

“It’s so remote here. I didn’t think there would be any harm.”

“The rules keep up safe. They keep us alive.”

He knew that. Any time they felt safe—that was the most dangerous time.

He sounded so downcast that she felt bad. He’d been so excited when he woke her, and now all that was ruined. Alice sighed.

“This place is a goldmine. There was so much. Way more than we could ever carry. Hence the feast.” He made a show of pulling out her chair.

Alice sat, and he pushed in her chair. She looked at the items on the table. There was cereal, uncooked green beans, uncooked corn, something that looked like beef jerky, and chocolate pudding cups for dessert. Her stomach clenched. She couldn’t remember the last time they’d had so much food for one meal. Even if David said they had enough, it wasn’t wise to be so reckless. But she didn’t care.

She dug into the food. Nothing had ever tasted so wonderful.

David tried to talk to her a few times, but Alice waved him away. She couldn’t focus on anything but the food.

Finally, they were finished.

She sat back and rubbed her stomach.

They each told each other what they’d found. David was most excited about the rifle and pistol he’d found in one of the cupboards.

“There was loads of ammunition, too. That’ll help keep us safe until we join one of the colonies.”

She stared at him skeptically.

“Come on, you’ve heard the broadcasts. People are finally coming together. We can build something better. No more of the old corrupt systems. With no billionaires or military-industrial complex or student loans or financial intuitions that exist just to screw the little guy. Look, I’m not happy about what’s happened either, but we need to make the best of it. We have a real chance here.”

He’d always been a dreamer.

Alice snorted. “How do you know that those people won’t just disappear, too?”

“I don’t, okay? But we need something to fight for. To believe in. Otherwise—” his voice broke.

Alice pushed back her chair. “I’m tired. I’m going upstairs. Thanks for dinner.”

At the top of the stairs, her legs gave way. She crumpled to the floor. Alice didn’t know what was wrong with her. She knew David was right. She was tired of this life, of always running and hiding and being scared all the time.

Downstairs, David’s radio crackled. The static continued until he found the right channel.

“. . . nightly broadcast from Utopia. We’re holding our first elections in two weeks. Campaigning has been fierce. Continuing with our ‘meet the candidates’ series, I’m here with Richard Fines. He was an engineer before the fall, and has been instrumental in getting Utopia up and running. Now, over to you, Richard. What makes you think that you would be the right choice to lead our community?”

Alice pushed herself to her feet and headed down the hall. She didn’t want to hear the broadcast. Some of the colonies sounded wonderful. She knew it was partially propaganda, but anything had to be better than this. She didn’t know why she was so reluctant to join the others. She couldn’t explain to David. She couldn’t even explain it to herself.

Outside the door to Hannah’s room, she paused. She hesitated and then pushed open the door. It wasn’t as painful now that she knew what to expect. Alice went to the window and stared out into the yard. She thought she saw something moving in the shadows beneath the trees. When she looked closer, she didn’t see anything. Not even the monsters that Monica had once described—tall, thin creatures that walked on two legs and ran on all fours. Monica had sworn that it was faster than any animal she’d ever seen. Alice had soothed her until she fell back asleep.

She unclasped the locket. Without giving herself a chance to think, she opened it. A tiny piece of paper fluttered to the floor.

There was only one photo inside. It was a picture of the three of them—David, Alice, and Monica. They were laughing. It was the day that Mom had taken them to the zoo. David had complained that they were too old, that they weren’t kids anymore, but Mom had insisted. It had been a wonderful day, one of their final outings before the fall.

Alice knelt and searched for the paper. It didn’t take her long to find it. The paper had been folded many times to make it small enough to fit inside the locket. She opened it.

Finally, the note lay unfolded in her hand.

It read, Thank you for being my sister.

I love you, blitzy, she thought, picturing Monica’s unruly mop of hair and wide grin.

The message wasn’t what she had hoped for, but it was enough.

Carefully, Alice refolded the note and tucked it back into the locket. Then she fastened the necklace around her neck and headed downstairs to join her brother.