Menard and May MaCaw

by Michele J. 8 months ago in family
Report Story 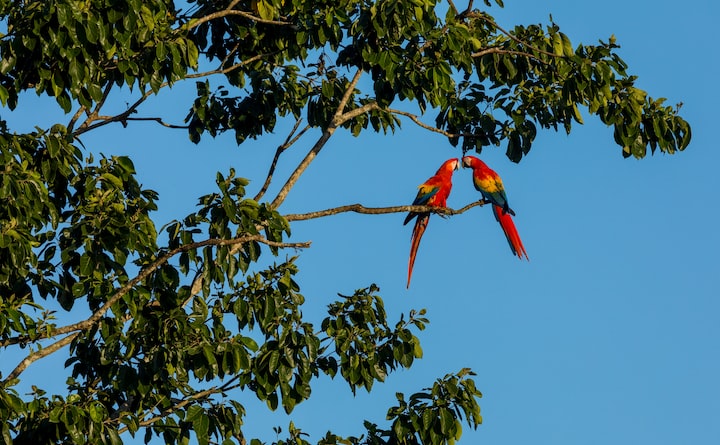 On an island far away lived two birds. They were husband and wife, Menard and May MaCaw. They were very happy on their island in their jungle. They had lived there many years and knew every one that lived there. Every morning Menard would get up early to forage for breakfast before May woke up.

He stopped at many different places, looking for the perfect meal. His first stop was Nut tree. It stood tall and proud. Menard said "Good morning Nut tree, it's going to be a beautiful day!" The nut tree smiled, "Happy morning Menard!" Nut tree's voice was deep and if you stood still you could feel the ground vibrate while he spoke. He knew Menard was picky about his breakfast for May, he wanted only the very best. "Take a look around, my best ones are at the top." Nut tree said.

Menard thanked Nut tree and flew up to the top branches. Hopping from branch to branch looking for the one that was just right. Nut Tree was sleeping again already. The older he got the more rest he seemed to need. Hopping to another branch he finds Franky frog. "Good morning Franky!" Menard says. Frog looks over to Menard and replied "Morning Menard, I am looking for breakfast too. "Franky Frog was a Red eyed tree frog. Menard thought is was funny that an Amphibian and a bird sometimes eat the same bugs.

Just then Menard saw just what he needed for breakfast, 3 perfect ones. He put them in his gathering bag and said "Good day to you too Franky, I must finish finding May's Breakfast.

Menard flew off, his next stop was for some fresh fruit. At the fruit tree Menard saw Terry Toucan. "Happy Day Terry!" Menard said. Terry was hooting and calling for his son. "It will not be a happy day if I loose Jr. again." Terry said. Menard remembered when Terry lost JR. All the forest birds were looking for him. They were scared that he got caught by the poachers. All the jungle is on watch when they come. Menard said he would help look for Jr. too. Menard flew in increasingly bigger circles around the tree looking for Jr. while Terry was checking all over the tree for his son. He heard Mrs. Toucan call very loudly for Terry. Jr. had made it home alone. Terry winces at the sound. Menard flies to Terry patting him on the back. "See you tomorrow, Good luck!" he said grinning. Terry looked at Menard and smiled sheepishly, "Good day my friend, Thank you for helping me look for Jr. I best be going now. " Toucan flies off toward home. Menard yelled "You forgot your breakfast!" Terry flies back embarrassed, quickly grabbing some fruit. Everyone in the jungle knew how forgetful Terry was. Everyone tried to help him as much as they could. When you live in the jungle, it is best to stand together, to help each other.

Menard found two very nice looking fruit and added it to his bag. Next he would go looking for some nice, fat juicy snails. He checked under the fruit tree, throwing leaves around with his beak and his feet. Nothing here.

He flew to back to Nut tree and began searching under it, all the sudden he heard loud footsteps coming towards him. He tried to fly away, but it was too late, he was under a net. He was caught by a poacher. He called for help as the man picked up the net and him, he saw his breakfast spill out on the ground. Menard hooted and called tried to bite the man, scratch him. Yelling as loud as he could. The man shoved Menard in a box, there were other birds in there too, all crammed together, his big body took up most of the room, the parakeets where scared and shaking. The box was shut tight Menard could not open it by pushing on it with his back. He keep calling out for help. Suddenly he heard a gun shot and a human scream. Then the box was been turned over and pushed around, was someone jumping on it? He was surprised to hear a low growl, jaguar! Oh no, where is the human? If jaguar can open this box we will all be snacks. Menard thought. He thought about his wife May and all his friends. Then he heard May talking, OH NO! he caught May too?!? he started using his beak to chew at the little holes in box. He heard many voices and could not understand what they were all saying. Did everyone get caught by the poacher? Menard felt frantic, his heart was pounding fast. The box started to be flipped around again, the birds inside calling out for help and bouncing around the box every which way. Suddenly, the box opened spilling everyone out. Menard landed upside down he was looking up at May, Franky, Terry, Jason Jaguar, and all of the other animals of the rain forest. Menard stood up looking around, the poacher was no where to be seen.

May gave Menard the biggest hug and kiss, she was so happy to have him safe again. She told him that Franky frog and Nut tree called for help.

Jason Jaguar heard the calls, He called his friends. Before the poacher knew what was happening. All the jungle animals teamed up and attacked the poacher. Nut tree dropped a branch on the poacher knocking the gun away from him. Elenor Elephant charged at him. The poacher tired to run away. Jason Jaguar jumped in the poachers way. This made the poacher scream in terror, he tried to run a different direction, but the snakes had gathered too. Some had very dangerous venom. Alice Anaconda was there too, she is very big and strong. She slithered toward the poacher, looking around the poacher sees the entire rainforest was there. He was very scared. "Please spare my life!" he says "If you let me live I will never poach again." The animals all moved closer to him, some growling, some squawking, some hooting. The poacher fell to his knees, "I will help protect you, if you let me live."

After the animals spoke on what to do they parted and let him leave to his boat. He was thankful and promised to keep his word. The animals of the rainforest would be keeping an eye on him to make sure.

Hello! Thanks for stopping in. My writing has appeared in notebooks, forgotten scraps of papers and a box in the attic for years. I enjoy reading, writing, crafting, gardening and being a Patriot. Feedback welcome & appreciated.

More stories from Michele J. and writers in Fiction and other communities.