by Jennifer 10 months ago in family
Report Story 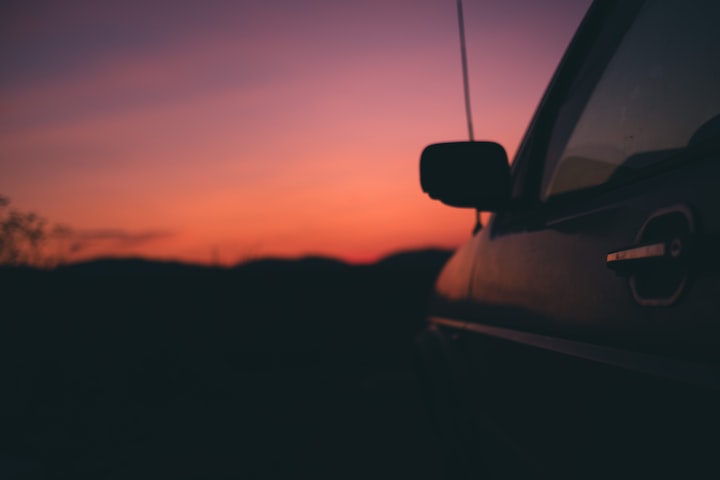 Photo by processingly on Unsplash

How many of us have dreamed about going on a road trip, just grabbing the keys, hopping into the car, and seeing where the road takes you, going from state to state, seeing all the sights, and experiencing all the moments? However, the reality is cruel and not many of us can do that. That’s why we watch movies and read books. We are living vicariously through them, wishing that was us behind the wheel…

After a long day of driving, two friends sat on the trunk of the car watching the sunset over the mountains. The sky was painted with oranges and yellows with a few clouds floating by. This spontaneous road trip was so far worth it. There was no directional purpose for them so it made it easier for them to slow down and explore more. Casey was glad her mother encouraged her to go on a road trip. She spent most of her time reading books and diving into the fictional world that she took for granted special moments like these in the real world. She was also glad she invited her best friend, Jamie. He admitted to her earlier that he was happy that she invited him to join her. He, on the opposite side of her, needed a break from reality. While he didn’t go into detail when he told her, he generalized it to stress and obligations. It was the first time he was ever vague to her since he was an open book, but she didn’t push him further about it.

Despite being on the road for three days, they didn’t cover a whole lot of ground. The detour to finding the farm of Jamie’s late grandfather took up most of the day. It was a few years ago that he had passed and Jamie wanted to find out what happened to the farm. As satisfying as it was getting some answers, it was equally disappointing. Finding out that Jamie’s father sold the property to the state to pave a new highway was a new low for Jamie. For the rest of the day he was silent. She did everything she could to cheer him up but had little success. Over time she gave up and let him brood to himself.

Their silence continued until the last rays of the sun dipped behind the trees. Casey didn’t mind the silence. . She was used to being alone for most of her childhood. It was calming and relaxing for her. Being around people for a long period of time was exhausting, and she was always looking for ways to avoid large gatherings. However, Jamie was an exception. Despite being a social butterfly and his constant need to socialize, she found his presence very peaceful. He understood her in ways not many people did. Whenever she told him she needed time to herself, he didn’t question it. Besides her parents, no one else understood that.

Casey looked over at Jamie. Despite it getting dark, she could tell he was in a better mood. His arms were still crossed, but his brow was no longer furrowed, eyes no longer red, and shoulders relaxed. She tried one last attempt to make him smile just so they didn’t end the day on a sour note.

“I want you to try something,” Casey started, “It’s a little test.”

Jamie scoffed. “How about no. Thanks to college, I’ve taken enough tests this year.”

“Trust me. It’s short, easy, and impossible to fail. Close your eyes.”

He looked at her with one eyebrow raised but closed his eyes anyway.

“Raise your hand in front of you like you’re going to receive a gift.”

“Now I want you to imagine there is a slice of cake in your hand. It can be whatever type of cake that you want. All you have to do is place it in your hand.”

A smile crept onto his face. “Okay.”

“Now answer me this simple question… Can you see it? Can you see the cake in your hands?”

“Yes, and it looks very delicious!”

“Yeah! Can you?” Jamie opened his eyes.

“No! My mom did this test on me and I couldn’t see the cake, just the back of my eyelids. That means you’re a visual thinker.”

“Cool!” He exclaimed. “So what does that mean for you? How do you think then? In… words?”

Casey laughed at his question. “No. I just think I guess. What kind of cake did you imagine?”

Jamie closed his eyes again. “I imagined the cake my mom baked for me for my 18th birthday. Chocolate cake with chocolate frosting and chocolate chips. It was the best cake I ever had.”

“It does… I miss my mom’s cooking. College life is so different. All I’m eating is ramen and frozen burritos. I miss the smell of food cooking in the kitchen. It didn’t matter what was cooking, it all smelled so good.”

It was good to see him smile. Jamie had one of those smiles that could light up a room. Perfect teeth, full lips, high cheekbones, and glowing green eyes, he was attractive, to say the least. Casey was surprised she never developed feelings for him all the years she knew him. Up until that moment. Feelings started to emerge from her chest that she never had before. Her heart quickened and a funny feeling fluttered in her stomach. This confused her. Was it because they had been spending so much time together, the fact that he understood her when no one else could or because they hadn’t seen each other in a few years because they were going to different colleges? Maybe it was a little of all three? She didn’t want this. It was such a typical romance. She wanted to break societal norms by showing the world that opposite genders could be friends! She decided to ignore it and not let fleeting feelings ruin her friendship.

“Can I ask you a question?” Jamie said. “and you don’t have to answer if you don’t want to.”

Casey was grateful it was dark, so he couldn’t see her blush. “Go for it.”

He hesitated before speaking. “Back at the barn while I was climbing and being stupid, I noticed you were crying. Now, there’s nothing with that. You can cry all you want. No judgment here. It was just - very out of character of you. I’ve never seen you cry for as long as I’ve known you, but you were in tears. Is everything okay?”

Casey bit her lip and looked towards the sunset with a lump in her throat. “No. Everything is not okay.”

“Do you want to talk about it?”

She closed her eyes and shook her head no.

Everything went back to being quiet. Her attempts to make him smile ended up with her almost crying again. She didn’t want to stay silent. Jamie was her friend and he cared for her deeply. If anything, she should talk to him about it. He would understand.

Jamie started to stand up and get back in the car.

“My dad’s health is declining.” Casey started. Jamie sat back down next to her without saying a word. “He’s not taking care of himself and keeps getting sick. The doctors think he might have an autoimmune disease. College is hard and I’m hundreds of miles away from home. I miss my bedroom, my books, and my family. I’m forced to share a dorm room with someone who is the exact opposite of me, and I can’t stand her. I find it difficult to relax in my own room so I’m feeling stressed out all the time. My mom was the one that suggested I take a road trip. While it has been really fun most of the time, watching you climb up so high brought back memories of my dad’s accident.”

“I don’t think you’ve ever told me what happened.”

“Most people don’t know. Junior year of high school, our cat got stuck up a tree, and my dad tried to get him down.” Casey shrugged. “The rest seems pretty obvious. He fell and fractured part of his spine. He’s paralyzed from the waist down. He and I were the only ones home. Mom was at work and my younger brother was at soccer practice. I watched him fall and break his body. I ran inside to find his phone to call 911. We had to wait a few minutes before they arrived, and in those minutes I felt so helpless.” Tears fell from her face. “I didn’t know what would have happened if you fell. We were in the middle of nowhere with crappy cell service…”

“It’s fine. You already apologized. No need to keep saying it.” Casey tried wiping away her tears. “This road trip was supposed to be a way for me to unwind and recharge, but all I can think about is seeing my dad.”

Casey shook her head. “My mom threatened to kick me out of the house if I did. She knows what’s best for me.” She let out a soft chuckle.

The sun was just about to disappear behind the horizon. It was near pitch black. They needed to find a place to stay for the night soon whether that was a campsite to set up their tent or a motel, it didn’t matter. They tried sleeping in the car once and that didn’t go well. Casey’s small car didn’t have the room for both of them to sleep with ease.

The two of them hopped back in the car. While Casey started the engine, Jamie looked at his phone for a minute. “Just a few miles away there is a town with a motel with vacancy,” He continued scrolling, “and a bakery. Do you want to have cake and coffee in the morning?”

Casey nodded and smiled. He knew just how to cheer her up.

I have nothing to prove that I'm this amazing writer. No qualifications or past works to prove my worth. I'm just a simple person that loves writing. It brings me happiness and I'm here to share some of that love with the internet.

More stories from Jennifer and writers in Fiction and other communities.