Me and My Mosquito Friends

by Isa Smith 6 months ago in Short Story
Report Story

Marron was a kleptomaniac and a pervert like the rest of them, but a good guy too, we thought. 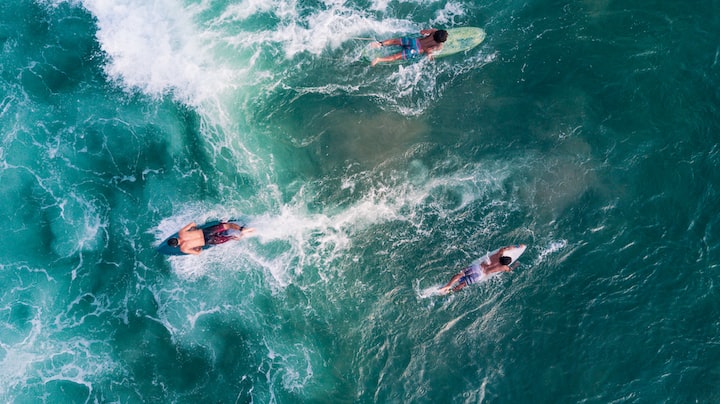 Photo by Jesse Hammer on Unsplash

On that trip, if you can call it a trip, Adie wore the same hat constantly, and this faded blue, slightly bobbly, striped vest. He also smoked constantly, in that intentionally nonchalant way people do when they’re in their live-fast-die-young stage. He didn’t live particularly fast, and he wasn’t too young either – 27 is too old for that phase if you ask me. But that’s the French for you, isn’t it.

We were both running from things at home. Me: a stalling photography career in London, only stalling due to my childish aversion to replying to emails and phonecalls within an appropriate timeframe. Him: a girl he had screwed over but was still in love with and maybe always would be, he thought. The best place for us was Bali for as long as bureaucratically possible, with all the other runners, we guessed. We planned the trip by email, and only bought flights one way. I first met him at his home break in the Basque country; a bouldery reef facing a little concrete fishing dock accessed by a steep lane cut diagonally into a cliff. I think we recognised in one another a tendency towards light self-destruction, for which others generally lack patience. We kept in touch.

The hat, then. It was a pretty special hat, a wide brimmed, floppy bucket hat in a soft polyester-nylon. It was a pleasing shade of tangerine, with a braided blue and orange rope that went around the forehead and hung as a chin strap. Adie even wore it surfing, and I had a bad dream about the chin strap strangling him in a wipeout and his body washing up limp against the cliffs, but that never happened in real life and also he never burned his forehead. So fair play, Adie.

By the time we’d been down on the Bukit peninsula for a few weeks, people were calling him Hat Man and me Hat Man Friend. It made me feel objectified, but Adie didn’t mind. He was One with the hat. He often slept in the hat. And Adie was the charming one who offered everyone cigarettes and we’d already spoken to everyone who was anyone, Bukit-wise, and they all remembered us as a package. Or Adie as the package, me as the free gift that you don’t really need and wouldn’t have paid for separately but don’t necessarily hate.

We were living in the Gu at the time, so technically we were on holiday in Uluwatu, me and him sharing a cheap little hut in a compound uphill from Padang beach. The waves were a dream for weeks in a row. Glossy blue grenades, radiant and wind-groomed day after day, more than you knew what to do with. All the expats got surfed out, and the tourists got all sliced up on the reef, and the water got quiet, for Bali.

I don’t know why we chose Canggu to ‘live.’ An eternal smother of scooter fumes mixed with the smoothie farts of a million hashtagging narcissists, and the waves were dirty and cramped. It was the first place we went when we landed, so I guess we just assumed that was what Bali was like. Before long Adie had a girl there in the Gu, some Dutch influencer with world class teeth and ironic fineline tattoos and a plethora of bucket hats, one of which she gave to Adie. That was the hat that made him Hat Man. We three rented a villa on the Seminyak side of town, with flowery bushes and tall white walls and a small square swimming pool. After a while, things had gotten a little hectic for Adie and I in the Gu though, for reasons I’m not at liberty to disclose. We’d been seeing some proverbial men about some proverbial dogs, if you will. Adie said we needed to go away for a while, so we did.

We had a monkey friend at our homestay down on the Bukit. A kleptomaniac and a pervert like the rest of them, but a good guy too, we thought. If we left fruit outside on the deck he’d snatch it and eat it just behind our hut, staring through our back window with sketchy wide eyes while we stared back at him. But then he’d take a dry leaf from the ground and crush it up in his spidery little hands and leave it in a neat pile on our front step, as if to say thanks, or sorry, or something.

Adie called him Président Marron and spent a fair amount of time talking to him, always in French. We knew he was a he because one evening we came back from surfing to find him on the deck, making passionate love to one of Adie’s flip flops.

Weeks passed, Marron returned. The heat dried our patience for hut-based cohabitation, the giant waves eroded our sense of manners and general mortality. The Dutch girl dumped Adie by direct message and began to post pictures of herself living her best life in our Canggu villa with a bearded man who never buttoned his shirt.

Adie came out of the hut at around eight on the day of the fight. It’s too hot to feel like morning at eight. It can be quite jarring, so to get a real morning feeling I always get up for dawn. There’s something memorable about dry season dawn in Bali. Gentle-looking, powdery sky. Few scooters. You can hear mostly roosters and other squawking birds waking up, and the heat is bearable. Elegant local ladies sweep the dusty roads in front of their businesses and light incense for the gods.

‘Where’s my ‘at?’ Adie said, emerging from the cool of the hut, squinting at the exterior doorknob, rubbing his scalp. His soil coloured hair disregarded gravity where he’d touched it; pliable with a self-regulating equilibrium of sea salt and scalp oil, same as mine. All we had in our shower was a bar of pink 7-Eleven soap.

His hair must’ve smelled, come to think of it, but girls seemed to like it. After a few cocktails at Sunset Point they’d take his hat off and run their fingers through it while I picked the labels off my binnie bottles and watched the sun going orange and melting down into the sea. Which, incidentally, was what’d happened the night before. He’d brought a cokey, bumbag-wearing Aussie chick named Mia back to the hut, and put his orange hat on the doorknob to mark the occasion. So I’d slept on the deck, me and my mosquito friends.

‘Uhh.’ I said, staring at the trickle of bites decorating the arch of my right foot. I was standing on the grass in front of the deck, wondering how to tell him about the hat. ‘I’m really sorry. I was wearing it.’

‘And President Marron took it.’

‘Le Président? Ee did what?’

Adie paced for a while, lit a cigarette, looked up at the cloudless sky. Then he detonated.

‘I’m sorry Adie. He took it while I was shitting. I didn’t see him, he ran up into the tree and fucked off.’

‘Sheeting? Watta-feuck?’ He punched a towel hanging from the roof of our deck with such commitment that he nearly staggered clean off it. ‘But why are you sheeting in my ‘at?’

‘I was just trying it on. I couldn’t come in the hut!’

He released a grey cloud from his nose, composing himself. ‘Nobody ‘ere will remember me now.’

‘What are you talking about?’ I said. I was genuinely confused.

‘You don’understand. Your life is so eazy. You don’aff to try,’ he said, gesturing frenchly.

He took another ferocious drag on his cigarette. ‘And you don’care to look after a leetle, feucking, ‘AT.’

He walked off out the compound, shirtless, hatless, trailing smoke. The toilet flushed inside the hut.

‘But what about Mia?!’ I called after him.

I heard him start his scooter, rev belligerently, and zoom off down the hill towards Padang. I didn’t see him for a while after that.