by Megan Baker 17 days ago in Short Story 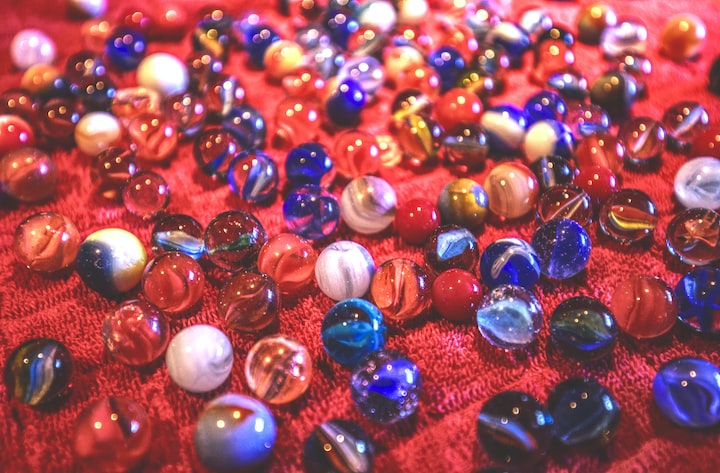 Betty scowls at the old fluorescent bulbs overhead as they take their sweet time to warm up and illuminate the cold garage. George had never gotten around to replacing the three bulbs that had burnt out, so even once the remaining five finally shed their full light, she struggles to find her way around. She’s had little reason to come into the garage the last several years, as it was George’s favorite place to be alone as he worked on various projects.

It looks so vast and empty now that he’s gone, uncluttered by his tools and projects.

Betty shuffles around the vacant garage, eyeing the shelves just above her head. With her attention drawn upwards and the lighting so poor, she isn’t too surprised when she stubs her toe on a stack of boxes resting on the floor. It does little to ease her pain as she removes her sandal to rub at the injured toe, examining the boxes themselves now. However, each is marked: owner’s manuals for various appliances, drawings her niece had drawn and given her over the years that she couldn’t bring herself to get rid of, and a box of holiday decorations.

Not the box she’s looking for.

As she scans the shelves again, suddenly a noise behind her catches her attention. A sharp clack against the cement floor of the garage. She hobbles over on her good foot, pulling her sandal back on as she does. Crouching down, Betty finds the source; a white marble, shattered into pieces from its fall. She scoops the broken object up, examining the damage.

The shattered orb reminds her of herself. The overall shape of the marble is still there, spread upon her cupped palm, much as she is still in the shape of her body, but inside nothing more than a mass of emotional shards.

With the economy as ill-faring as it has been, Betty has recently been laid off. Hence her haste in finding her last pay stub from a past job she had upgraded from over a decade ago; she needs the more minute details on it as she files for unemployment. Her lover, George, felt that this was the opportune time to inform her that, not only was he breaking up with her, but he was leaving her to be with the woman he had been having an affair with for over a year.

She finds irony in finding this broken marble; between losing her job and lover and learning of George’s cheating, she’s felt like she’s been losing her marbles.

For a moment, she ponders where the marble came from. She doesn’t even recall where she last stored her large bag of marbles, handed down to her from her grandfather. A second clack rings out sharply. This time, it is a black marble, and it survives its fall to roll across the cement to rest against Betty’s sandal.

Betty retrieves it, holding it up to examine it in the low light. A small nick mars its surface, likely from the impact. But what really catches her off guard is her reflection on the shiny surface. Heavy bags have made a home under her eyes and as she meets their reflection, she can’t help but notice how worn they seem; how devoid of any internal spark she has become.

She doesn’t know how long she stares into the black orb - that eternal abyss - and admires how it reflects her in all her despair. But finally, woefully, she shifts her eyes to a shelf across the garage. There, she sees the familiar heavy cloth sack that has been overlooked for years in a corner and she draws closer to it. A hole as large as a golf ball has been gnawed from it, presumably by a desperately hungry mouse. Through it, she can see a myriad of colorful marbles peeking out at her, each one blatantly taunting her with her own wretched reflection.

Betty feels the need to cover them and their mocking stares and pulls another heavy cloth sack from beneath a dusty pile of clutter along the edges of the garage - the only room George had allowed for her to store items after he laid claim to the garage. With a few minutes of strategic maneuvering, she manages to transfer the contents of the damaged bag into the new one without spilling anymore marbles. Satisfied, she takes the bag of marbles inside, setting it down in a spare room until she can decide what to do with the marbles. She then returns to the garage to continue the search for her documents.

Betty has long forgotten about the bag of marbles when she enters the spare room next. Weeks have passed, but she is still in need of a new source of income. Looking for items she can sell to cover expenses, when she sees the bag of marbles, she stops to consider if they may be worth anything. While she was fond of the round objects in her youth, they have sat for years without purpose since. They are, however, one of her last ties to her late grandfather.

Betty approaches the large bag and kneels. She scoops out a few handfuls of the colorful orbs, lost to a storm of emotional and logical odds, and then seats herself on the floor as she proceeds to sift through the collection. As she examines individual marbles, she recalls conversations with her grandfather about them. He had explained to her the things to look for in them to determine if they were worth anything, and as she sorts through, she finds a number of them. By the time she has separated the ones she thinks are profitable from the rest, she is enamored with the sentiments of her youth.

‘I used to use this one all the time when grandpa and I would play,’ she thinks, admiring a dark blue marble she recognizes as her old favorite. A handful of others stand out in the same manner, and Betty takes care to set them aside - to keep.

The next day, Betty rounds up the batch she thinks could fetch a little cash and heads to the local pawn shop. The employee, Mr. Smith, is a man ten years her junior, and he greets her as she enters the shop with the chime of the door.

“Afternoon, ma’am! What have you got here today?”

“These are some marbles I held onto after my grandpa gave them to me. I wanted to see how much you think they would be worth and how much you would buy them for.”

“All right, let’s take a look,” Mr. Smith says, nodding. He indicates a stool for Betty to sit on as he examines the marbles. “Got quite a few here! So, why are you interested in sellin’ today?”

“Oh, same as most folks these days; I lost my job, and I need a little something to keep me afloat while I find something else.”

“My apologies for the job loss. I hope you find something soon.”

The employee examines each marble in turn; the whole process takes over an hour. At the end of it, he has them sorted into smaller batches, and he walks Betty through the differences in each batch and how much they can sell for. It’s quite a number. He then throws out what he can pay for them. It isn’t as good, obviously, but it’s a good enough deal that Betty says yes; she can use that cash for expenses.

It is nearly closing time when Mr. Smith finishes writing up everything and walks Betty to the store front, chatting with her and intending to hold the door for her as she exits. However, George, walking by on his way to the local bar, catches sight of her there and rushes inside.

Upon seeing one of the familiar bags from the garage on the counter and Betty clutching a small bag of marbles the employee said were nice, but not nice enough to buy, he puts two and two together and begins to berate Betty for selling the marbles. She reminds him that they were given to her by her grandfather and are hers to do with as she pleases, and he begins to stalk over to the unattended bag on the counter. The employee sees what he’s doing and rushes behind the counter, moving quickly to pull the bag behind it.

“Give me those! Those aren’t hers to sell!” George screams, lunging forward and grabbing the other strap of the bag before the clerk can remove the item.

“Sir, we just closed a deal. These are mine now. Now, please let go,” the employee says sternly, gripping the strap he has and staring George down with a sudden fierceness. George responds by yanking the bag with force. The old bag can’t handle the stress; it tears apart under the abuse of the men’s tug-of-war, the marbles within scattering everywhere. George flies backwards at the unexpected loss of tension, slipping on the roving marbles. He flails, knocking into and breaking many items in the pawn shop before landing with his back against the floor.

For a moment, there is a heavy silence. The employee silently walks out from behind the counter to survey the full extent of the damages. He nods to himself as he watches George struggle to get up; the marbles are absolutely everywhere across the floor.

“Would you like some help cleaning up, Mr. Smith?” Betty inquires softly. The young man shakes his head, smirking.

“No thank you, ma’am,” replies the seller as he continues glaring at her ex-lover. “George is going to stay until every last marble you’ve sold me is found - all 927 of them. Then I’m going to bill him for the several thousand dollar’s worth of items he’s destroyed.”

“Would you prefer me to get the police involved?”

“Then start cleaning up. Remember; there’s 927 marbles. I’ll go get you a broom for the glass too.”

“I’m sorry for the trouble he’s caused you today,” Betty states. George’s angry gaze bores into her, but she simply smirks blatantly at his anger. She’s been so tired of being the bigger person after his unfaithfulness, that this little moment of sadistic glee feels due.

“Don’t you worry, Betty; he ain’t leavin’ ‘til this is straightened out. You go on and have a nice night out for the both of us, hm?”

“That I can do! Good night!” Betty responds cheerfully, the small bell on the door chiming as she exits the shop. She practically skips her way home, her wide, gleeful smile never faltering.

Betty hopes that Mr. Smith does hold George responsible for every last marble she sold him. As she slips her hand into her jacket pocket, she grins brighter as her fingers brush the cool, smooth surface of the wayward marble she had scooped up discreetly after it had rolled against her shoe. As she pulls the blue marble out, she catches sight of her reflection on the object; this time, the most noticeable thing about it is her wide, rueful smile.

‘George is going to be there a long time tonight,’ she muses happily.