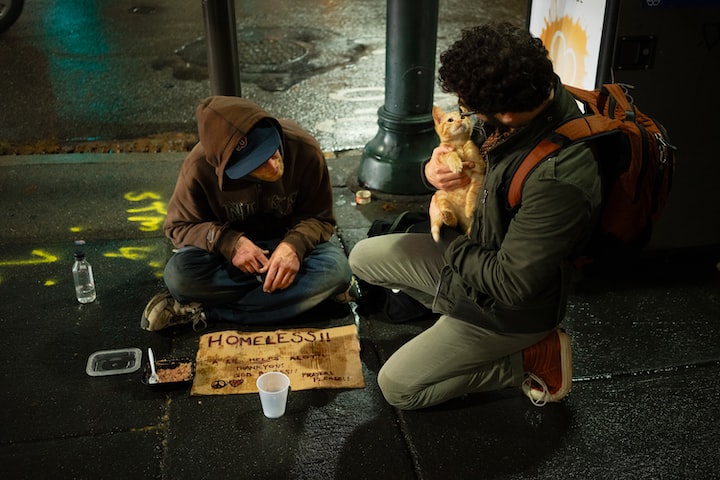 As Copper waited for the light to turn green, he slowly drank in a popular billboard promoting the upcoming state fair.

The billboard ad, located on the left side of Dirkstone Boulevard, featured a young couple standing in front of a cotton candy stand at an amusement park, holding up matching peace signs, while posing hard with their tongues hanging out.

The image made Copper think of his favorite Aunt Wennaya who had just moved back to North Carolina. Copper's spirited, ultra-opinionated Aunt Wennaya was not fond of the "tongue pic" trend at all.

He remembered her recently asking him: "Copper, why are all of these young folk always sticking their tongues out like rattlesnakes in their pictures? They act like they ain't got no home trainin'! Why don't they pick a less cunning animal to emulate?! Snakes aren't loyal to anybody! I don't care if y'all start hooting like owls, just don't go around behaving like snakes literally or figuratively. Remember God don't like ugly!"

Copper snickered at the thought of his Aunt Wennaya and her dramatic opinions but he had to agree that 'tongue pics' do look pretty ridiculous.

Copper only had twenty minutes to make it to school on time. He already had eleven tardies on his transcript and his father Richie was definitely not going to be handing out raris & new kicks upon hearing of a twelfth.

Copper's father felt that lateness was something practiced by lazy, disorganized people, with selfish hearts. Three character traits that his father absolutely abhorred.

Copper hated disappointing his father but there was nothing like a white toffee mocha from Starbucks on a snowy winter morning; therefore he decided to make a run for it.

While sitting in the Starbucks drive-thru, Copper was struck by the sight of a sickly-looking blonde kid with a Mohawk who looked to be in his teens. Copper immediately felt a kinship to the teen because of his hairstyle since Copper had just cut his hair into a frohawk for his recent Homecoming dance.

The homeless teen stood across the street holding a wet cardboard sign that read: 'Young and Homeless, Help'. Despite the potentially hazardous weather that the city of Dirkstone Heights had to offer during the wintertime, the teen seemed to be unaffected by the heavy dusting of snow flurries falling down all around him.

'Young and Homeless', those were two words that you don't see together often Copper thought to himself.

Copper's attention quickly turned back to his white toffee mocha, as it spilled down the front of his favorite white t-shirt. He parked swiftly, cleaned the stain from his shirt as best he could with the sanitizer and napkins from his coat pocket, turned on his favorite radio station, then sat and savored his favorite bittersweet coffee treat.

A few minutes later, Copper's mahogany eyes widened in surprise when he heard the commentator from his car radio say: "It is three before the hour on a Thursday morning. Bundle up folks, it's cold outside!"

Copper promptly restarted the car, threw up a Hail Mary, then burned rubber all the way to his high school. He hoped and prayed that he made it to first period before Miss Corbett took attendance for the day. He certainly didn't want another century-long lecture from his father about the importance of being on time.

The following morning as Copper turned into the Starbucks parking lot he saw the same homeless kid from the previous day. This time the kid was holding a new cardboard sign that read: 'Young and Homeless trying to make it to Omaha'.

The kid looked burdened. In fact, a sullen expression looked as if it had been permanently tattooed upon his freckled face. The tips of his Mohawk had been dyed fire-engine red, the whites of his eyes were extremely pink and he was now sporting an eyebrow ring as well.

The kid looked stylish but very unkempt. On his person, he wore: a red bandana neatly tied around his head, an undersized, gray, wool-jacket, a faded red Tupac Shakur shirt with a large hole right above the hem, wrinkly gray skinny jeans with holey knees, and a dingy pair of white hi-top Converse sans socks.

Copper usually didn't make pit stops for panhandlers but for some odd reason his heart felt a tug to do so that morning.

After ordering his coffee, Copper parked his vehicle. Afterwards, he reached into his wallet and pulled out two crisp twenty-dollar bills. Then he rolled down his window and beckoned the teen over.

"Will this help?" Copper asked earnestly as he slid two crisp twenty-dollar bills to the homeless kid through his passenger side car window.

"Sure...every little bit helps," the homeless kid replied dispassionately as he stuffed the bills into his left jean pocket.

"My future," the kid responded cryptically.

"How old are you? Copper asked straightforwardly.

"I'll be 20 in March, Pisces gang all day," the homeless kid responded with a slight smile as he turned and threw a small rock across the parking lot, successfully landing a bank shot into the center of a potted plant living on a waterbed of snowy bark, near the Starbucks entrance.

Whoa! He only has me by three years! Copper thought to himself.

"Do you have family here?" Copper asked inquisitively.

"My parents are no longer around," the kid said matter-of-factly.

"What's it like being homeless?" Copper asked innocently. Tact was definitely not one of Copper's strong suits.

"It's hard. The uncertainty is what kills me the most. I never know where my next meal is coming from or whether people will be kind…but...I can always count on the sun coming up and the birds singing me 'O Happy Day' each morning with their cheerful chirps. Sometimes life can be unpredictable; you just gotta roll with the punches, and duck," the homeless kid replied calmly.

"How did it happen man? Copper asked with concern.

Copper glanced down at his wristwatch, then hurriedly said: "Man, It's getting late… I better get going... Take it easy--have fun in Omaha!"

"You too! Thanks again for the dono!" the homeless kid replied, his face beaming.

The following weekend as Copper drove past Starbucks he couldn't shake the image of the homeless kid from his mind. He wondered what circumstances had forced him to live on the streets. He quickly pushed the potentially-depressing thought from his mind. It had been a long week; it was time to turn up.

Copper turned up his favorite song by a new hip-hop group called: The Never-Quitters and quickly drove toward the Vocal Rocks Cafe to meet up with two of his childhood friends Maximillion and Honor-Marie for a night of food, poetry & fun.

The Vocal Rocks Cafe was located in a city called Canyondale. Canyondale was only an hour north from Dirkstone Heights but it seemed like it was a world away because of its mellow, artsy vibe. The Vocal Rocks nightclub was a hot spot for creatives; it attracted some of the country's most acclaimed writers. In fact, famous writers were occasionally spotted signing autographs on Sunday nights at the popular dinner club. People were drawn to the lively juniper-drenched gathering place like the Kardashian's are drawn to Instagram.

'Open Mic Night' was well underway when Copper arrived. He spotted his friends around 9:45 PM. They found a table near the stage, ordered dinner and drinks, then began sharing two humongous plates of chicken nachos while they waited for the next poet to take the stage.

Copper excused himself to go to the restroom. He was patiently waiting in line for the next free urinal when he felt a hard tap on his right shoulder.

Copper swiveled around to see the homeless kid that he had chatted with in the Starbucks parking lot.

"Sup man? What are you doing way up North?" Copper asked with a grin.

"Chillin'... Chillin'," the homeless kid said as he lowered his head.

After a long pause, the homeless kid looked up and added: "Dude, I must confess... I'm not technically homeless... I'm a sociology student from Sims college. I was temporarily on the streets while I was conducting a research study on homeless demographics and community giving in the Dirkstone area. I just came over to give you props for your kindness. Out of the 204 people that I encountered in a two-day period; you were one of three people that actually took the time to speak to me and you were the person that gave me the most with forty dollars. Trust me… your money won't go to waste. It is going towards purchasing books for a new homeless shelter being built in downtown Dirkstone.You really defied all of our expectations. My research team expected to get our greatest donations from retirees since they tend to have more disposable income than any other demographic group, but you managed to prove us wrong kiddo," the kid concluded with a huge smile that exposed a medium-sized gap between his two front teeth.

"Whoa my guy! Why did you feel the need to lie? Copper asked crossly, his burnt sienna brown face tensing in anger as he spoke.

"I didn't actually lie about my housing status... I was homeless for about three nights. I stayed in a tent in the empty lot across from Starbucks with a couple of friends for a few nights. It was litty. We ate a bunch of junk food and rocked out to some smokin' tunes," The kid added.

"As for Omaha, I'm actually transferring to the University of Omaha next fall for my last two years of college, therefore Omaha is technically in my future. The social experiment that you were a huge part of was something new that I was trying so that I could raise my grade in my Soc 242: Intro to Regional Homelessness course," The kid stated proudly.

"But you received donations under false pretenses. Don't you feel even a little bad about that?" Copper asked incredulously.

"No way my guy and you shouldn't either. Your kind gesture is going to make an actual difference in somebody's life," the kid responded jovially.

"You said that your parents aren't around anymore. I bet they're actually alive aren't they? Copper asked sarcastically.

"Well, Copper... have a free meal and drinks on me. Kindness deserves to be rewarded. My uncle Billy-Jack owns this place. Just leave your tab with me over at table fourteen when you're finished eating. Thanks again for the dono. Books heal tha soul... ya know...Always remember that a good book can turn a bad day into a good one! Now dawg, I've gots to scoot. I see a B.L.B.P (Beautiful Little Brown Philly) that needs to be claimed, and I just so happen to have my lasso with me tonight," Caleb concluded with a mischievous wink, his shy act mysteriously gone forever.

As Caleb pimp-walked away, Copper caught a glimpse of the back of Caleb's t-shirt. It read: Make Kindness Boss Again. Copper initially chuckled at the garishness of Caleb's shirt & his questionable antics. But, he was truly in a weird place emotionally following his conversation with Caleb. Copper didn't know whether Caleb deserved an MMA butt-kicking for his lies or a gigantic hug for his compassionate genius. But, one thing was for sure, Copper was glad that he had been in a "giving mood" during Caleb's "Time of Need."

I am a super-spiritual, fun-loving artist, writer, & peer-counselor residing in the Pacific Northwest. I am also an Institute of Children's Literature alumna who enjoys writing about the triumph of the human spirit.

More stories from Tiffany Gordon and writers in Fiction and other communities.