but not about you. 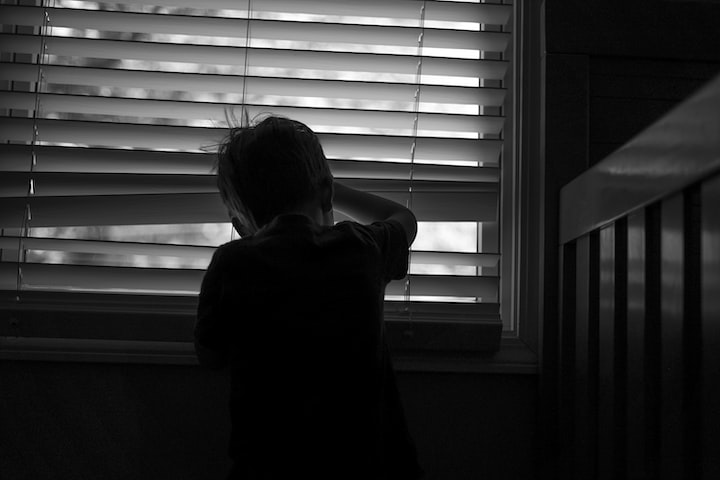 Photo by Jeff Hendricks on Unsplash

The call went out across the playground, "Fight, fight," and the human-made fight ring encircled the two boys in the middle. The smaller boy, Geoff, said, "Take it back."

"Make me," the taller boy said.

Geoff swung at the older boy and missed. The counterpunch hit him square on the jaw, and he landed on his back.

The teacher on morning duty interrupted the fight and hauled Geoff to the fifth grader's principals' office.

"Geoff, this is the third fight in a month. What are we going to do about this?" the principal said.

"He called my dad a baby killer," Geoff said.

"We've talked about this, Geoff. I have no choice but to issue a three-day suspension. Your mother is on her way to take you home."

The palpable silence from his mom on the ride home drove him to stare out the window at the passing billboards. Automotive dealers, restaurant and cell phone company signs flashed before his eyes. A Make a Wish foundation sign flashed by his window.

Why can't I make a wish?

They arrived home, and his mom broke her silence.

"Geoffrey, I struggle every day with your father on special assignment with the U.S. Army. I don't need your antics adding to the stress. Someone taunting you is not a reason to start a fight. You're restricted to your room the next three days, except for meals," she said.

"And that includes the Three Musketeers Club. They are not to come over," she said.

He spent the day on the computer doing his school assignments and streamed the movie Aladdin. Three ads for the Make a Wish foundation played during the commercial breaks.

I wish my Dad would come home. I miss him, he thought as he drifted into sleep. That night he dreamed he was in the movie Aladdin.

He awoke the following morning, prepared his Lucky Charms cereal and ate in his room. On his dresser lay an unexpected shoebox-sized package wrapped in brown paper with a slot cut out. A small envelope was attached.

"Mom must be up to her silly object lessons again," he said to his pet gerbil and rolled his eyes.

Geoff ate the sugar-laced cereal and pondered what the note would say. With dread and suspicion, he opened the envelope and read the handwritten note.

Believe a wish; it can come true.

Make a wish, but not about you.

Three is the magic of your delight.

Place a wish in the box, one per night.

Geoff read the note three times. The handwriting wasn't his mom's. He had no idea who had left the box or who wrote the letter.

Someone thinks, because I'm ten years old, I'd fall for such a dumb game.

He ignored the box and completed his online Math, English, and American history assignments before lunch.

The box vibrated and danced across the dresser and fell to the floor and captured his attention. Puzzled, Geoff picked it up, and warm energy pulsated through the brown paper into his hands as if alive.

His Dad served in the U.S. Army overseas and had been on a temporary duty assignment for a year. The location was top secret, but Geoff wanted him to come home now.

He tore a sheet of paper from his notebook and wrote his wish.

I wish my Dad would come home soon.

The father-son day at school had been difficult for Geoff. His father was M.I.A. on the school front. Georgie's father shared stories as the town's maintenance director, and Jimmy's Dad talked about his days as an airline pilot.

Georgie lived across the street and Tommy one street over. They called themselves the Three Musketeers, and their motto, All for one, and one for all, was their pact. On Halloween, they wore matched costumes and renamed themselves Athos, Porthos, and Aramis.

Tommy's Dad served in the same Army unit as his Dad. Georgie's Dad filled the gap and included them in all their adventures. Like Geoff, Tommy was angry most days and had just finished a three-day suspension for a fight in the boy's bathroom. They both needed their dads.

The folded paper slid easily into the slot, and he sat on his bed and waited for something to happen and it did.

The box convulsed, shook, expanded, then contracted, then ejected the note out of the slot, to the ceiling, and into his lap. The handwriting from the original message overwrote his own.

Rejected, Make a wish but not about you.

Geoff's anger exploded. He wadded the paper in his fist and threw it at the box.

"You're so stupid," he said and snatched the box. Furious, he slammed the cardboard into the wall, and it bounced to the floor. He kicked the dented package across the room and into a corner.

"I hate you," he said and threw himself face down on the bed and cried.

Suppertime came, and he joined his mom in the kitchen.

"Geoff, there is something I need to tell you. Georgie is very sick. You remember, he only has one kidney since the car wreck. That kidney has failed, and he needs a transplant. But they don't have the money even if they find a matching donor. Please call him tonight and encourage him. We are having a neighborhood bake sale Saturday to help," she said.

Georgie's family struggled since the accident when his mom died, and he'd been seriously injured. His father worked for the town and did odd jobs on weekends to pay off the medical bills. Georgie never complained about his Dad working so much and helped take care of his little sister.

Later that night, he lay in bed, worried about Georgie, and grew sleepy. He had decided he would call him tomorrow when the crumpled box in the corner vibrated and thumped against the wall and stopped. He would almost be asleep, and the package would wake him. Geoff, angry, jumped from his bed, turned on his lamp, retrieved the box, and shook it.

"What do you want from me?" he said. He glanced out the window and across the street. Georgie's bedroom light came on. The concern for his friend finally connected in his mind with the three wishes.

He sat at his desk and wrote.

I wish Georgie's family gets the money for his kidney transplant.

The box received the wish, and Geoff went back to bed.

The following day Geoff woke for day two of his suspension, ate his cereal, and logged in to his online class. He had forgotten about the box and the wish.

"Hey Georgie, you okay? What's going on? News vans and reporters are in your yard," he said.

"Dad took me to the doctor, we had to stop for gas, and he did a strange thing. He bought a lottery scratch-off ticket which he has never done in his life.

Geoff, we won five hundred thousand dollars. We have the money for my transplant if we can find one," Georgie said.

Geoff stared at the box and wondered if his wish had come true or if this was a coincidence. The news headlines broadcast it as a miracle for a family that so desperately needed one.

Later that night, he turned off his lamp, and the box vibrated and bounced. He jumped out of bed, irritated.

"So, you think you created the miracle for Georgie, and now you want me to make another stupid wish. But the wish can't be for me," he said, "I'm going to make a wish and prove that this is stupid."

He wrote his second wish and fed the box.

The next morning, he started day three of his suspension. Lunchtime came, and his cell phone pinged from an incoming text.

Guess what? My Dad's coming home tomorrow. I am so excited.

He's coming home on military transport that had an equipment emergency and was diverted to his base. He's confused about it but said this is an order he will gladly follow.

Geoff tossed his phone on the bed and punched the crumpled box.

"Why can't I have a wish, just one wish, it's not fair," he said and stood at the window. Georgie waved at him from his bedroom.

His cell phone rang with a Three Musketeers-themed ring-back tone.

"Hi Geoff. Are you okay? You sound…. mad. I can't believe Tommy's Dad is coming home. I wish your Dad could too. Anyway, I just wanted to tell you, I'm sorry."

"Thanks, one day he will," Geoff said. "When will you have your kidney transplant?"

"We have to find one first, the organ donation center can't find a match anywhere, and time is running out for me. I've got to go now; I have dialysis again. All for one, and one for all, bye."

While Geoff ate his peanut butter and jelly sandwich lunch, he had an idea of how to outsmart the rules. He walked to the box to place the third wish into the slot.

I wish my mom's husband to come home tomorrow.

His hand hovered over the entry slot, and he hesitated. Georgie's voice kept replaying in his mind. The organ donation center can't find a match anywhere, and time is running out for me.

With tears in his eyes, Geoff tore up his wish, wrote a new one, and dropped the wish into the slot.

I wish Georgie can find a kidney in time.

Free from suspension, he returned to school the following morning. He avoided the crowd on the playground and waited by the door. Midway through the morning, the school intercom buzzed, and a voice announced, Geoff Winfrey, please come to the office immediately.

Every student in the class turned and stared at him. The teacher, without a word, but with eyes of judgment, locked onto Geoff and pointed at the door. Geoff was confused. He hadn't caused any trouble, and whatever they were going to accuse him of doing had to be a lie. He took his time and made the trek like a condemned man heading to the gallows.

The school administrative assistant spoke curtly and told him to wait in the principal's office.

The principal walked in and sat down.

"There is a man here to ask you some questions about your behavior, Geoff," he said and pointed at the door. "Do you know this man?"

Geoff turned to the door and jumped up from his chair.

"Dad!" and ran into his father’s outstretched arms.

After the celebration, his father drove Geoff and his mom home.

"Should I tell him now?" he said, and she nodded, yes.

"The strangest thing happened Geoff, a miracle. Last night I was contacted by the United Network for Organ Sharing. They told me I was a match, based on my military acquired DNA, for a ten-year-old boy stateside that needs an emergency kidney transplant. That boy is Georgie. The Army approved and I caught the same flight home as Tommy's Dad," his Dad said.

Anxiety, and its heavy weight, lifted from Geoff’s mind because Georgie would live, and his and Tommy’s dads were home. He went to his room to find the magical box. It was gone.

He walked to the window, viewed his neighborhood, and thought about the package’s lessons of the past three days. He understood now.

Believe a wish; it can come true.

Make a wish, but not about you.

Since reading Tolkien in Middle

school, I have been fascinated with creating, reading, and hearing art through story’s and music. I am a perpetual student of writing and life.

Read next: Spit in the Sea